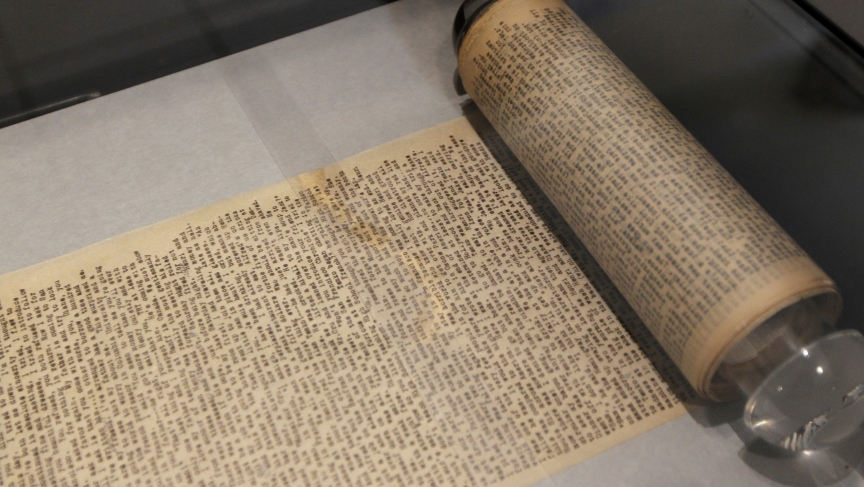 The 120-foot long original scroll of the novel "On the Road" by writer Jack Kerouac is displayed at the Musee des Lettres et Manuscrits in Paris on May 16, 2012. The novel has now been turned into a set of Google driving directions by a university student in Berlin.

So that's not the way Jack Kerouac started his novel, "On the Road." But it is the way that Gregor Weichbrodt, a university student in Berlin, begins his version of the literary classic.

Since Kerouac first published the original in 1957, fans have made various maps to retrace Sal Paradise's journey. But Weichbrodt may be the first to take the trip itinerary, plug it into Google Maps, and reassemble the written directions into an eBook, "On the Road for 17,527 miles."

"I did some research and I didn't find anything. But it was so obvious that I had to do this," he says.

Weichbrodt started by writing a short computer code that would allow him to enter a whole bunch of routes on Google. Once he entered all the locations in the book, he hit enter. And there was his book.

“It was pretty easy and it took me a half an hour or so,” he says.

And you though Kerouac wrote fast.

Weichbrodt's book is only 45 pages long. No maps. Just directions. And he matches those directions to Sal's adventures, chapter by chapter. Weichbrodt says his book is conceptual, to be taken as an idea. But reading the first couple pages of directions is interesting for anyone who's read the book. You realize "On The Road" really is about a physical journey. Even if it's a journey that Weichbrodt never finished — or even particularly enjoyed.

So forgive Weichbrodt if he doesn't get the pitch perfect ending where Sal looks back on his adventures.

There's no Dean Moriarty to remember in Weichbrodt's book. There's only the journey. And while Kerouac's book ends on a river pier in New Jersey, Weichbrodt's story ends earlier in Mexico; with the simple words any driver on a cross-country adventure likes to hear:

Destination will be on the right.