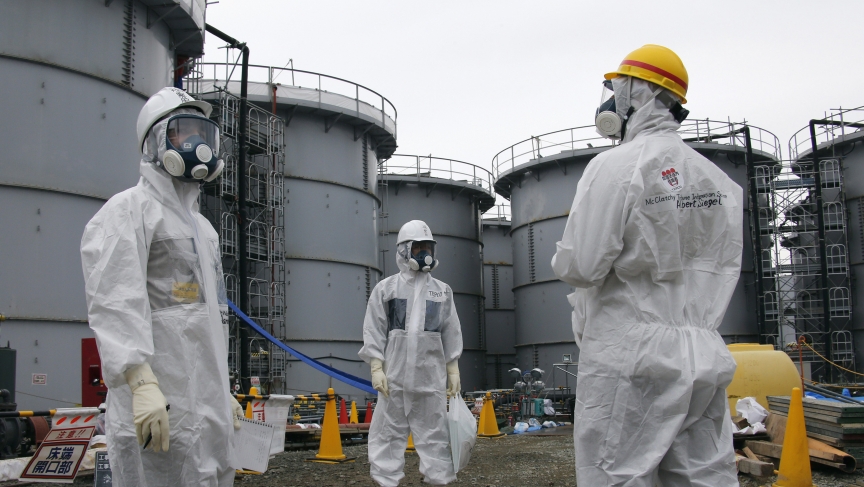 A Tokyo Electric Power Company official and journalists wearing protective equipment stand near storage tanks for radioactive water at Japan's tsunami-crippled Fukushima Daiichi nuclear power plant in November 2013. A team of Japanese scientists say they've identified a local species of microalgae that may be able to clean most of the radioactive cesium out of the water.

Not very widely known, perhaps, but “pretty self-explanatory” says Lee Newman, so long as you know that “phyto” means “plant.”

Newman’s a professor of biotechnology and phytoremediation at the State University of New York in Syracuse. And she says phytoremediation might just be a big help in decontaminating water at Japan's Fukushima Daiichi nuclear power plant.

Almost three years after the triple meltdown there, the plant's owners still haven't figured out what to do with the huge amounts of radioactive cooling water flowing from the plant's damaged reactors into an ever-growing complex of metal storage tanks, some of which are leaking into the ground and into the ocean.

Cleaning up that water is a massive task. But what if something remarkably simple could help? Something like algae, perhaps?

This is where phytoremediation comes in. In a nutshell, it’s the process of using plants and other kinds of organisms to help clean up toxic waste.

The field isn't widely known, but Newman says it is well-established.

“There's been quite a bit of research in this area looking at heavy metals, pesticides, chlorinated solvents, explosive compounds and radioactive compounds,” Newman says.

Those radioactive compounds include things produced by nuclear power plants, like cesium and strontium. It's long been known that some plants and algae can suck up these substances because they're chemically similar to nutrients the organisms need, like potassium and calcium.

There's a lot of cesium and strontium in the environment around the Fukushima nuclear power plant these days, and like everywhere on earth there are also a lot of different species of microalgae in the area.

Enter Yoshihiro Shiraiwa, a professor of plant physiology and metabolism and provost of the faculty of life and environmental sciences at Japan's University of Tsukuba, not far from Fukushima.

Shiraiwa and his colleagues tested 200 species of local microalgae and isolated one strain that was especially effective at sucking up cesium. They grew a lot of it in a lab, dumped it in a bunch of cesium-contaminated water, and after a while filtered it back out again.

The results were striking.

“In our test,” Shiraiwa says, "more than 90 percent of radioactive cesium was removed by this microalgae.”

The microalgae performed its magic in fresh water, like the stuff being stored in all those tanks at the Fukushima plant. It can’t live in salt water, but Shiraiwa says the research team also identified a floating marine plant near Fukushima that shows promise for removing cesium and strontium from seawater.

They published their findings last month in the Journal of Plant Research.

All in all a very promising start, you might think, in developing a relatively cheap way to help deal with at least one of the problems at Fukushima.

But, of course, it's never so quick and easy as that.

Says Shiraiwa, “we are just facing to some kind of wall.”

That "wall" is access to any actual water from the Fukushima storage tanks. Shiraiwa says his team hasn't been able to get any of it in order to test the microalgae in the real-world condition it’s meant to address.

In fact, he says the plant's owner, the Tokyo Electric Power Company, or TEPCO, just doesn't seem interested in his research.

“At this moment, their response is not so high,” he laments.

Lee Newman at SUNY Syracuse says she's not surprised. She's seen this kind of reluctance from cleanup managers before, and she says there are a lot of reasons for it.

“One is that where most of these people are engineers, they are familiar with the engineering technologies. They're not familiar with biology,” she says.

And Newman says a biological system can be a lot more difficult to perfect, even if it's ultimately a lot cheaper.

In general, she says, when it comes to this kind of work, people are reluctant to embrace any innovative technology they aren't familiar with, not just phytoremediation.

That's not to say Newman thinks the microalgae and plants the Japanese researchers have identified would be a silver bullet for Fukushima's contaminated water problem, even if TEPCO were more interested.

She calls Shiraiwa’s research a promising first round of investigation, but says there are still a lot of questions about how well it would really work.

Still, she thinks it holds a lot of potential for dealing with a problem badly in need of solutions.

“The government and the power company, if they work together on this, I think this could be a very viable technology," she says. "And the longer they take to decide, the bigger the problem is going to be.”