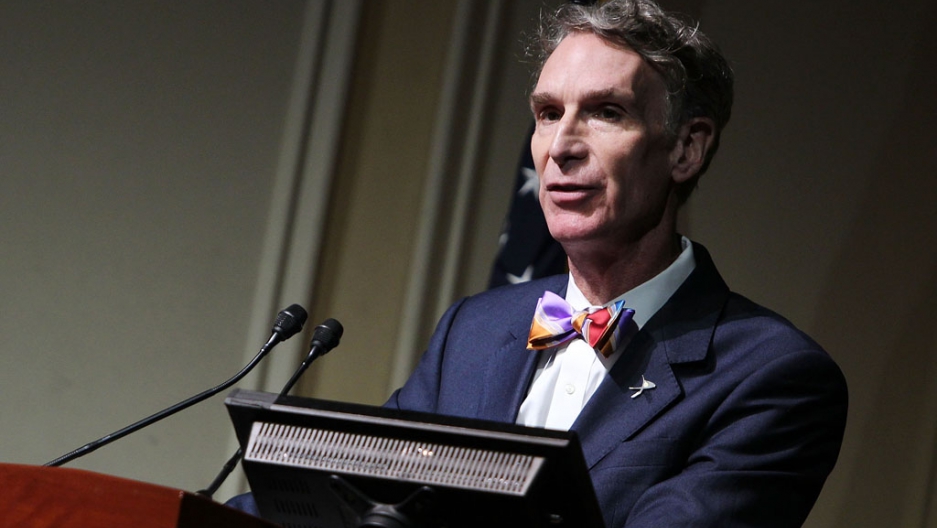 Bill Nye speaks at the Celebration of Carl Sagan at The Library of Congress on November 12, 2013 in Washington, DC.
Credit: Paul Morigi
Share

This we can’t argue: Bill Nye’s debate with Ken Ham on Tuesday night in Kentucky sparked healthy discussion about heady topics. After that, well … it gets tougher.

Here’s what all the fuss was about. Nye we all know. He’s “the Science Guy” of TV fame. Winner of Emmy awards, dancer with the stars and best buds with some guy named Obama.

Ham is popular in his own right, too. He’s CEO of the Answers in Genesis ministry and founder of the Creation Museum, a facility that’s boasted two million visitors since 2007.

They posted dueling YouTube videos last year, with Nye suggesting kids must be protected from creationist thinking. Ham countered with a roster of accomplished scientists committed to the Bible’s version of events.

They continued the argument on Tuesday in Petersburg, Ken., inside the Creation Museum, speaking for about 2 ½ hours.

Here’s where the debate focused: Is creation a viable model of origins in today’s modern scientific era?

Declaring a clear winner isn’t going to happen because both sides are firmly entrenched. Still, since you’ve lasted with us this long, we should probably get off the fence and tell you this: Nye won by a landslide.

Why? He presented evidence while Ham relied upon the Bible. Ham said he relies on Genesis for his answers, and Nye offered easy-to-understand science lessons. Among his best was counting the rings on trees.

It seems plausible to anyone who has ever chopped firewood that each single ring of a tree stump represents roughly one year in that tree’s life.

So as Ham based his entire argument on the assumption that Earth is only 6,000 years old, Nye spoke about a tree called Old Tjikko.

Scientists who carbon dated one of the world’s oldest trees — a Norway spruce located in, oddly enough, Sweden — and said it was 9,550 years old.

To that, Nye asked: “How could these trees be there if there was an enormous flood 4,000 years ago?”

Here’s what else we learned:

The debate was widely popular.
CNN reporter Tom Foreman, who mediated, told the sold-out auditorium of about 900 people that “hundreds of thousands” were watching online. He said representatives from 70 media organizations attended the event.

Both men are accomplished academics and speakers.
Nye has won 18 Emmy awards and continues to host and produce television programs. He’s a mechanical engineer by trade, and is executive director of The Planetary Society, the world’s large space interest organization. He’s also adamant science education is vital if the United States wants to remain a world power.

“Without scientists and engineers to create new technologies and ways of doing society’s business, other economies in other countries will out-compete the United States and leave our citizens behind,” he wrote on CNN.com explaining why he accepted the debate.

Ham is a transplanted Australian who also has a science degree (environmental biology) and has appeared on a raft of TV shows, from CNN’s The Situation Room to Fox and Friends.

Noah’s ark was the focal point.
The Bible preaches that God cleaned the slate 4,000 years ago, telling Noah to collect two of every animal (14,000 in all) as 40 days of rain fell on the earth.

Nye said if the ark was built in the Middle East, how did kangaroos end up aboard, and how did they get back to Australia?

“You don’t want to raise a generation of science students who don’t understand how we know our place in the cosmos,” Nye said.

They were unapologetically polite.
Nye reminded his audience that he’s not against spirituality. He said millions of scientists find comfort in religion, but many of them can’t accept Ham’s assertions. Ham suggested science and religion are linked.

“It doesn’t matter if you’re a creationist or an evolutionist. You can be a great scientist,” Ham said.

Neither conceded defeat.
During a Q&A after the formal debate, they were asked what would sway them to the other side. Nye said “we would just need one piece of evidence” from his opponent, while Ham said nothing could persuade him “the word of God is not true.”

More from GlobalPost: Creation is not suitable for children, Bill Nye says

This article was edited to change 14,000 followers to 14,000 animals. It also included changes about carbon dating Old Tjikko.