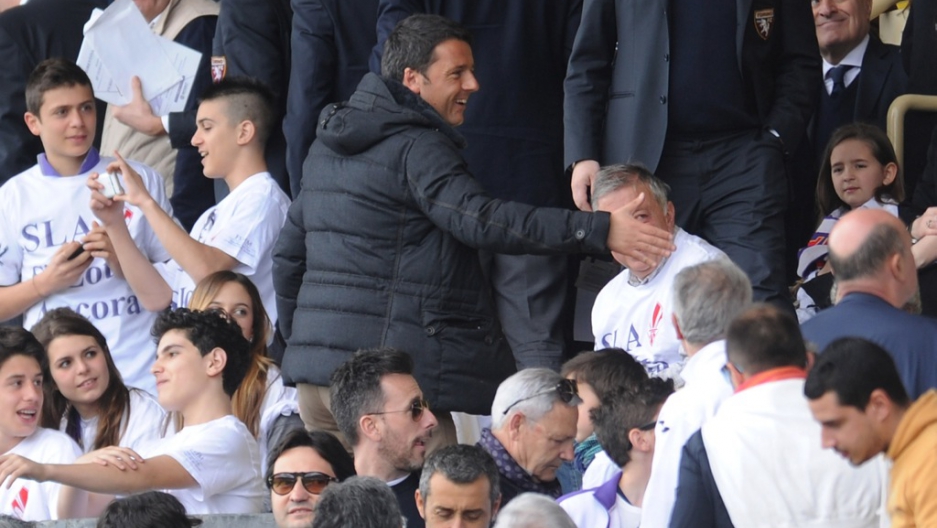 Matteo Renzi attends a soccer match on April 21, 2013. Young, dynamic and photogenic, the mayor of Florence is being touted as the man to lead Italy into the post-Berlusconi age.
Credit: Dino Panato
Share

LISBON, Portugal — The British media have kicked off the year by indulging in one of their favorite sports: bashing the French.

France's turgid economy and President Francois Hollande's colorful love life have combined to persuade London headline writers that their neighbor across the Channel is a new "sick man of Europe."

They may have done better to look further south. Compared with the mess in Italy, France looks to be living la dolce vita.

Take last week. Twice, the parliament in Rome erupted in a chaos of blows, insults and threats that would get you arrested elsewhere.

The main protagonists were lawmakers from the biggest opposition party, the Five Star Movement, an ideologically ambiguous group led by the rabble-rousing former comedian Beppe Grillo.

They sought to invade government benches, battled with stewards and hurled sexist slurs at speaker Laura Boldrini after she used unprecedented guillotine powers to cut off an attempted filibuster.

One Five Star lawmaker suggested female members from the government’s ranks got their jobs by performing sexual favors.

Over the weekend, Grillo invited supporters on Facebook to tell him: "What you would do if you had Boldrini in your car?" That prompted a torrent of abuse, including rape threats.

Another opposition group, the Northern League, staged its own mini-riot in parliament on Friday and announced it was boycotting debates.

That may come as a relief to those tired of the group's racist comments directed at the country's black minister Cecile Kyenge, including by one lawmaker who showed up in the chamber wearing blackface last month.

Outside the political arena, the latest twist in the Meredith Kercher killing tragedy underscored the sorry state of the justice system.

Amanda Knox and Raffaele Sollecito received a guilty verdict for the 2007 murder of the British student last week, more than two years after they were acquitted on appeal and four years since their first conviction.

On the economic front, the country's biggest employer and best-known brand, carmaker Fiat, announced Wednesday that it’s quitting its Turin headquarters after over 100 years to base itself in the Netherlands, and switching its main stock exchange listing from Milan to New York.

The news came days after Fiat announced it was taking full control of Chrysler. The company management gave assurances about maintaining its production in Italy, but the decision was hardly a vote of confidence in a country mired it its longest recession since World War II, struggling with the worst unemployment in almost four decades and saddled with the developed world's third highest rate of public debt.

Two-years since Silvio Berlusconi's exit as prime minister was supposed to usher in a brighter new era, Italy seems still to be searching for a savior.

That's where Matteo Renzi comes in.

Young, dynamic and photogenic, the mayor of Florence is being touted as the man to lead Italy into the post-Berlusconi age.

Renzi, 39, was elected in December leader of the Democratic Party — the center-left formation that’s the main component in Italy's coalition government.

He immediately threw himself into the task of overhauling the country’s arcane electoral laws, aiming to construct the foundations of stable government in a country where only one out of 60 post-WWII administrations has survived its full term.

A previous reform introduced under Berlusconi in 2005 failed miserably. Nicknamed the "pigsty law," it led to a multitude of parties and shifting coalitions that has hamstrung efforts to introduce economic reforms the country sorely needs after more than a decade of stagnant growth.

The situation became even more urgent after the Constitutional Court last year threw out that law, meaning the country will revert to an older, even less effective voting system unless parliament can vote in a new law before the next election — which, given the government’s fragility, will probably be much sooner than the 2018 due date.

He's also working on a more sweeping reform of the constitution that would require the Senate to vote away its current broad legislative role in favor of the lower chamber, ending the current system where bills are bounced back and forth between two houses with broadly identical powers.

"This will stop the ever-increasing blackmail powers of the small parties, and the horse-trading behind the voters' backs," Renzi wrote on Facebook last week. "The electoral law is a huge step forward. After years of stalemate, we've moved from words to deeds in just a few weeks."

However, opposition to Renzi’s high-speed approach runs deeper that the wilder fringes of the opposition.

Many in his own party are uneasy about the way he's rushing through the law, which is due for a vote in parliament next week.

What worries them most, however, is that Renzi reached out personally to Berlusconi in order to secure right-wing support for the reform.

Many fear Renzi's deal-making has enabled Berlusconi to regain political respectability after his convictions last year for tax fraud and paying for sex with an underage girl.

The magnate has gone on record expressing a liking for Renzi. That's helped by the younger man's center-right background, unlike many in his party who have communist roots.

Even among his supporters, the concern is that the relatively inexperienced Renzi will be outmaneuvered by the 77-year-old tycoon, who on Sunday expressed the "slightly crazy idea" of winning the next election despite a ban on holding office imposed after his criminal convictions.

During his almost two-decade domination of Italian politics, Berlusconi has used his media empire and immense skills in political intrigue to wreck the careers of foes and former allies while ensuring his own survival.

Renzi backers have been using social networks to urge caution. "Renzi, trusting Berlusconi is like asking Little Red Riding Hood to trust the wolf," read one tweeted warning from Sicily.

Berlusconi has already secured concessions that could favor the right in his negotiations on the electoral law.

Nevertheless, Renzi steered the bill through a first parliamentary vote on Friday with backing from his party, including from his Democratic Party colleague and rival, Prime Minister Enrico Letta.

"Renzi is right when he says Berlusconi has got millions of votes, so if you want to discuss a reform, you need Berlusconi," says Giovanni Orsina, deputy director of the School of Government at Rome's LUISS University.

If he succeeds, securing approval of the electoral law could become a crucial first step toward Renzi's declared goal of engineering a renaissance for the world's ninth largest economy.

"It will mean Italian politicians are finally showing they can do something," Orsina says. "What Italians have been perceiving is complete paralysis, the total impossibility of politicians doing anything, so this is in itself significant."