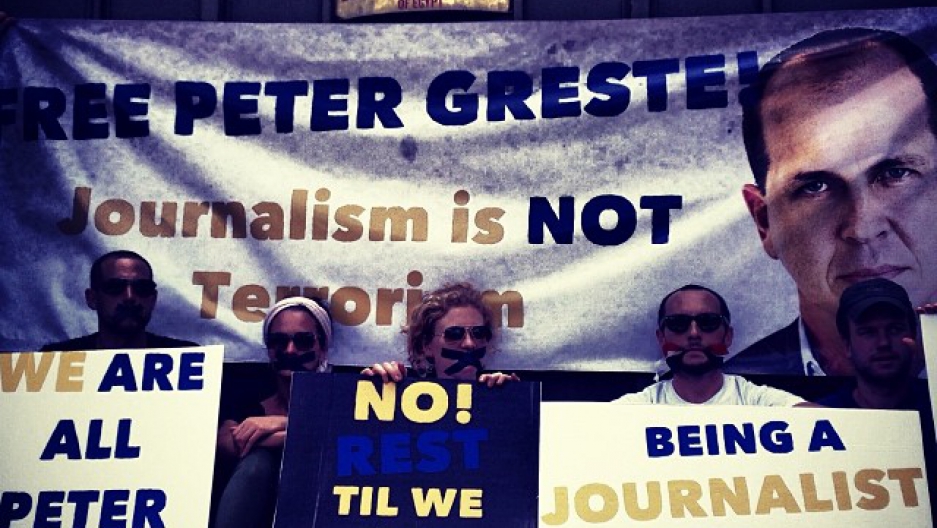 Protesters at the demonstration over journalist's Peter Greste's detainment, outside the Egyptian embassy in Nairobi.
Credit: Tristan McConnell
Share

NAIROBI, Kenya — Journalist Peter Greste, along with several of his colleagues, has been detained in Egypt since Dec. 29. He was arrested for being a journalist. He is accused of terrorism. And he has been held in solitary confinement at Cairo’s Tora Prison for over a month, allowed out for just four hours a day.

Greste is East Africa correspondent for Al Jazeera. He lives and works in Nairobi, which is why we held a protest here Tuesday: He is a friend, a colleague and daunting competition to many of us.

On Tuesday the Foreign Correspondent Association of East Africa (FCAEA) along with the Committee for the Protection of Journalists (CPJ) organized a protest march and sit-in at the Egyptian Embassy calling for Greste’s release.

A protester outside the Egyptian embassy in Nairobi (Tristan McConnell)

We taped our mouths shut. We wore T-shirts and waved placards reading “Journalism is not terrorism” and “We are all Peter Greste.”

“Free Peter Greste!” we chanted at the gates of the embassy. Greste’s parents joined us remotely during our multi-hour sit-down protest, calling in on Skype from Australia.

Being both protesters and reporters, we photographed, filmed, tweeted and Instagrammed with the hashtag #FreeAJStaff in an effort to raise awareness of the plight of Greste, his colleagues, and the many other journalists around the world locked up for nothing more than doing their jobs.

Robyn Kriel, FCAEA chair, met with Egypt’s deputy ambassador who heard our demands for Greste’s immediate release. He listened, and offered a scarcely credible response — that a state cannot intervene in the judicial process.

Police guard the protest outside the Egyptian embassy in Nairobi. (Tristan McConnell)

The protest was both universal and personal.

Most important was the defense of freedom of speech, which is under attack in Egypt as elsewhere. If the military authorities in Cairo get away with jailing journalists and accusing them of terrorism, then none of us is safe. An attack on Greste and his colleagues is an attack on all of us in the profession as well as on everyone who values the freedom to speak their minds and know the truth.

But it was also more personal for many of us who have known and worked alongside Greste for years. We know him as a curious, conscientious and courageous journalist and stalwart friend. In open letters sent from his prison cell Greste was typically modest.

“What is galling is that we are … behind bars for what I consider to be some pretty mundane reporting,” he wrote in one.

In another he staked out what he called his “battle,” fought from a prison cell in Cairo. “I am committed to defending a fundamental freedom of the press that no one in my profession can credibly work without,” he wrote.

We must make that battle our battle. The treatment of Greste and his colleagues at the hands of the Egyptian state is an outrage.

We are outraged. That is why we protest.

The author. Those supporting the imprisoned journalists are taking and circulating photos of themselves like this one. If you wish to join, you too may add you photo, tagging it with the hashtag "#FreeAJStaff"(Tristan McConnell)