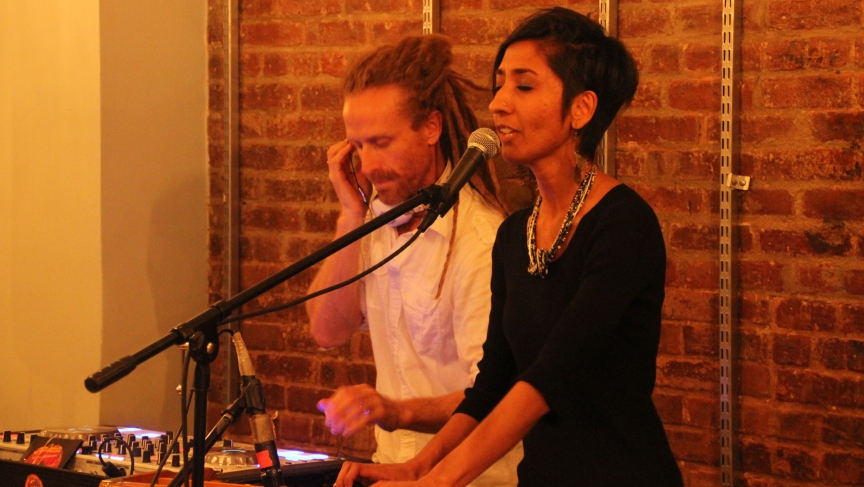 About 50 people braved a miserable, cold mid-winter Manhattan evening recently, gathering in the front room of a Hare Krishna center to listen to a quick set by Sheela Bringi and DJ Drez. Bringi alternated between singing and playing the traditional Indian harmonium keyboard and bansuri flute.

DJ Drez dropped in drones and a rhythm that soon revealed itself to be a chopped-up version of Buffalo Springfield's 1960s hit "For What it's Worth." Not a typical Indian classical song, but then Bringi likes to mix things up. She counts British-Tamil pop star M.I.A., avant-garde pianist Cecil Taylor, and an ancient Vedic chanting tradition from Mysore, India, among her influences, and you can hear all of them on her debut album "Incantations."

Bringi grew up in Fort Collins, Colo., with parents who, with a few of the other Indian families in town, taught her a lot about the music of their native south India.

"Our families would get together and have big music parties and eat and sing and spend the day together, like in India," Bringi recalls. "When I go to India, it's the same thing. We get together with our relatives and eat and take a nap and then play music and have dinner and play music."

She learned about Indian vocal and chanting traditions from her mother and about rhythms from her father. Those lessons from her parents come together on her new album, including on the song "The Three-Eyed One." The words are from a Sanskrit mantra about Shiva, a Hindu deity associated with death and rebirth. As you might guess, they're pretty heavy.

"It's talking about immortality of the soul, and it's asking for the fear of death to be removed. Which translates into the fear of us being separate from each other — being isolated. And so it's saying, 'Just as a ripe cucumber is freed from its stem, but not from its immortal self, let me also be freed from my fear of death.'" Bringi explains.

While she grew up steeped in Indian music, her parents also encouraged her to listen broadly and find new connections. She studied with some avant-garde heavies at Mills College in Oakland, and found a new set of musical peers at Cal Arts in Southern California. One of her closest collaborators is Clinton Patterson, a young blues musician out of Georgia. He produced Bringi's new album, and plays on several tracks, including the acoustic guitar on this one, "Raja Ram."

Even if the story is, as is the case here, out of the Ramayana — an ancient Indian epic.