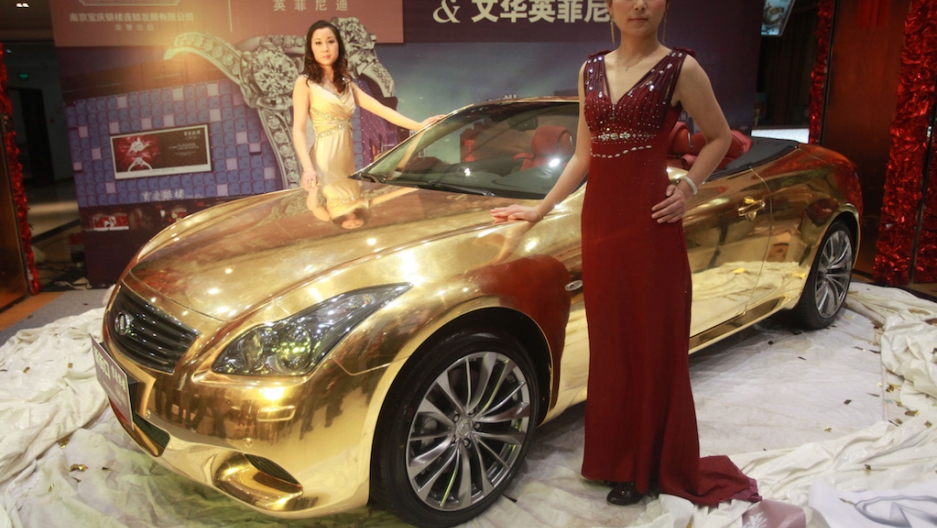 Models pose with a gold-plated Infiniti luxury sports car at a jewellery store in Nanjing. China is predicted to become the world's largest luxury goods market by 2020, but many of the country's wealthy are choosing to emigrate abroad, according to a new study.
Credit: STR
Share

Of course, they almost never do.

In China, however, that’s now no idle threat, especially for the rich.

Amid a widening crackdown on corruption, China’s wealthiest citizens are increasingly seeking a better life abroad.

The United States is their favored destination.

A higher percentage of the wealthy favor sending their offspring overseas. Eighty percent want their children educated abroad. The US is the top choice for university, and the second choice (behind the UK) for high school.

The reason? China’s elite are not big fans of the country’s rigid education system.

Even more striking is the surge in wealthy Chinese getting green cards. In 2010, 772 Chinese received investor green cards (given to people who invest at least $1 million in businesses in the US). In 2012, that figure leapt nearly eightfold to 6,124.

Why the exodus among families who have benefited most from China’s rise?

Aside from education, another obvious motivator is pollution. China’s toxic air and poisonous water are regular topics of complaint among the wealthy (as well as ordinary Chinese).

A less obvious factor is the crackdown on corruption.

Over the last year, Chairman Xi Jinping has overseen investigations into some of China’s wealthiest and most powerful party figures, including those who have profited massively from the state-owned oil industry. He has vowed to take down both “tigers” (top bosses) and “flies” (local officials).

In January, Xi stepped up his campaign by forbidding the promotion of officials who have spouses or children living abroad. These so-called “naked” officials are seen as especially prone to corruption.

This designation covers a large group. According to a report by the Hong Kong newspaper Oriental Daily, a majority of members of China’s 2013 National People’s Congress were “naked officials.”

In fact, Xi himself was one, too. His daughter attended Harvard under an assumed name, and the chairman’s extended family has allegedly amassed assets worth several hundred million dollars.

Of course, it’s not just wealthy Chinese who are leaving the country in droves. According to a report by the Center for China and Globalization, a total of more than 9 million Chinese had emigrated through the end of last year,* most of them middle-income earners between 35 and 55 years old. In 2012, the US was the top destination, with 81,784 Chinese receiving permanent residency in 2012.

For Americans who feel insecure about their country in light of China’s impressive achievements, it may be reassuring to know that, when given the means, many Chinese would rather move to the United States than stay at home.

Correction: GlobalPost initially reported that more than 9 million Chinese had emigrated last year. The figure is cumulative, as stated in this article.