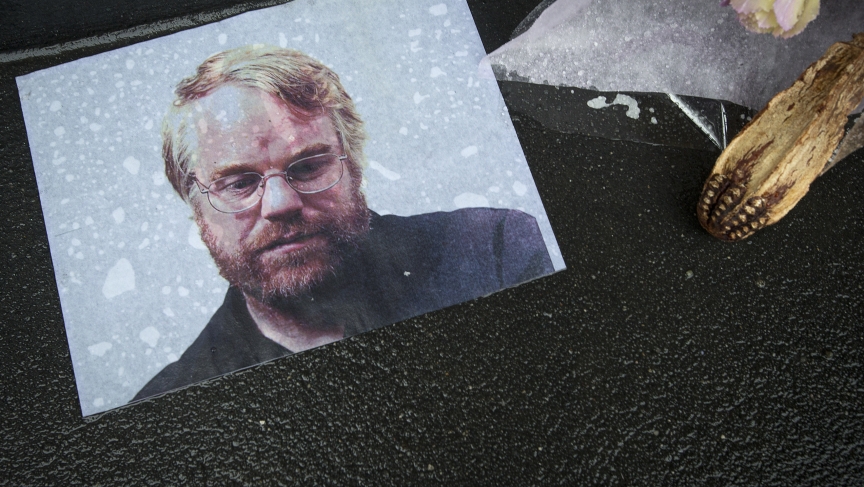 A photo of actor Philip Seymour Hoffman is pictured as part of a makeshift memorial in front of his apartment building in New York February 3, 2014. Officials suspect the acclaimed stage and film actor died of an apparent heroin overdose.

Here's the thing about heroin: Once someone's addicted, it's really hard to kick the habit.

And once many junkies start, they want a stronger dose with every hit. If they can't get quality, they go for quantity. So supply is key. The tragic news of actor Phillip Seymour Hoffman has reminded us of the word "overdose."

But the reason there are overdoses is because there's ample supply.

Angela Me has tracked the heroin supply chain across the globe. She's the head of Research and Trend Analysis for the United Nations Office on Drugs and Crime in Vienna, Austria. She says the majority of heroin still comes from Afghanistan. Last year, the country produced 75 percent of the opium and heroin for the global market.

"And this year, given the record-high production in Afghanistan, the percentage will be much higher," she says.

Much of that record production is due to instability in the region.

All that heroin moves across the globe in different ways. It heads north to central Asia and Russia. It heads west through Pakistan, Iran, Turkey and the Balkan countries reaching Europe. And now, it's also moving by sea. Large cargo ships are being used to move heroin to ports in West Africa. And from those ports, it's moved primarily to Europe, with the remainder going on to the US.

But the majority of heroin in the US doesn't come from Afghanistan.

"It comes from Colombia and Mexico," Me says. "And a small part from Guatemala."

Clearly opium poppy, the source of heroin, is not strictly an Asian and South Asian crop, though that's its reputation. It's been cultivated for years in Central and South America. But Me says only recently have Mexican and Colombian drug cartels been cultivating in massive amounts, enough to satisfy a large and resurgent North American market.

Heroin use was actually declining over the last several years. But that's changed recently. Me thinks its resurgence comes from recent restrictions made to limit access to pharmaceutical opioids, like oxycodone.

Hoffman's overdose comes in that context. Taken as part of an expanding market, it might be an ominous sign of things to come.

A previous version of this story contained a misspelling of Philip Seymour Hoffman's first name.