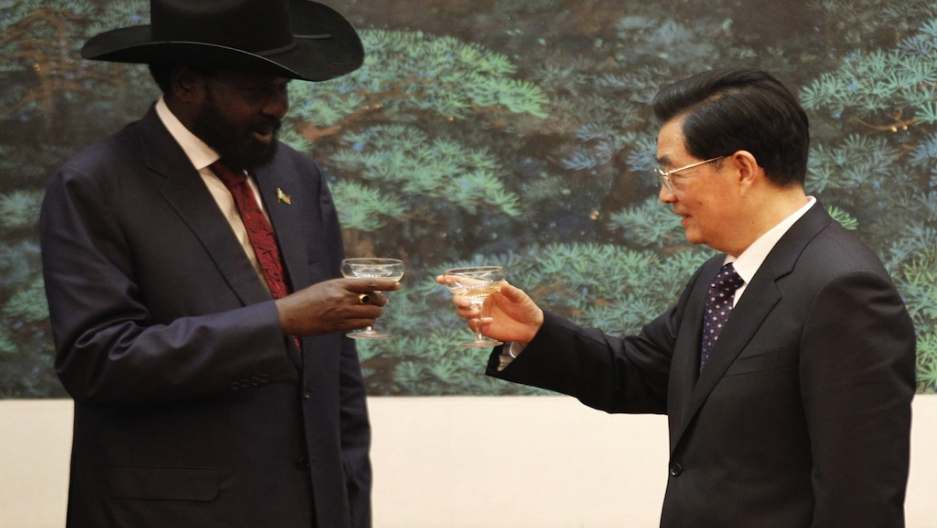 South Sudan president Salva Kiir (L) and Chinese president Hu Jintao toast each other during a signing ceremony at Great Hall of the People on April 24, 2012 in Beijing, China. President Kiir confirmed that he sees China as an important and strategic partner, while the meeting was held against a backdrop of recent violence between the the newly formed independent nation of South Sudan and Sudan, both countries from which China purchases oil.
Credit: Pool
Share

LONDON — Ten thousand people are believed to have been killed, and hundreds of thousands displaced since fighting broke out in South Sudan in mid-December.

The conflict between the government troops of President Salva Kiir and rebels loyal to former Vice-President Riek Machar has continued despite concerted efforts by both African mediators and the United States – through Special Envoy Donald Booth – to implement a ceasefire.

There is a certain irony in the US inability to bring about a ceasefire. Not only is it a global power, but it also acted as midwife in the creation of South Sudan, providing extensive support and working closely with both President Kiir and Machar.

The fact that Washington has been unable to stop the two from fighting speaks volumes about the slow deterioration in the relationship, largely due to US displeasure over rampant corruption and support in Juba, the center of South Sudan’s government, for troublesome rebels in Sudan.

It also reflects limited US commercial interest in South Sudan; observers recall a conference in Washington last year to promote US investment in the country that was not productive.

With a history of donations and advice failing to get results, some have suggested a different approach.

Representative Ted Yoho (R-FL) has called for the US to emulate China, which prefers trade to aid and has major stakes in South Sudan’s oil industry, largely due to its historic presence in the economy of the united Sudan.

China imports about 70 percent of Sudan and South Sudan’s oil and the China National Petroleum Corporation is the biggest single foreign investor. Before the fighting broke out, Beijing and Juba were discussing a loan of up to $2 billion for infrastructure, agriculture and the mining sector.

This economic footprint has given Beijing both the means and the motive to intervene. Special Envoy for African Affairs Zhong Jianhua has offered to mediate between the government and the rebels. At the South Sudanese peace talks in Ethiopia this month, China’s Foreign Minister met with delegations from both sides.

Given China’s principle of non-interference in the internal affairs of other states, this is deeply significant, although China insists that it will only intervene at the request of both parties.

Chinese mediation efforts between conflicting parties, including engagement with rebel movements, are not unprecedented in Sudan and South Sudan. In 2008, at a time when the negotiations seeking to end violent conflict in Sudan’s Darfur region were stalling, China began to understand that to become effectively involved in any conflict resolution efforts, it must listen to and engage with all the key players.

This cautiously evolving approach to conflict resolution illustrates how China is becoming a reluctant mediator in situations where it has interests and where the US is proving unable or unwilling to step in.

We may see this in Afghanistan, where the US finds itself unable — despite 12 years of blood and treasure — to keep President Hamid Karzai firmly on its side and committed to good governance. Additionally, US attempts to mediate peace talks in Qatar have failed. US influence will only diminish as its troops withdraw and American investments in the wider economy remain limited.

China will have a larger stake in the economy of Afghanistan when it is no longer able to piggyback on the US for security.

Consequently, it will be forced to take a more active role in finding a political solution between the Taliban and Kabul, perhaps through its friends in Pakistan.

In July 2013, reports indicated that Chinese officials were negotiating directly with the Taliban in advance of the US withdrawal. Intervening in Afghanistan’s fractious and bloody conflict will be a challenge for China, but it may have few other options for protecting its investments once the US takes a back seat.

This pattern, which is already becoming evident in fragile states from South Sudan to Myanmar and Afghanistan, will continue to develop as the global South increasingly looks to the East for development assistance and economic investment where US influence is declining.

Still, it is important not to overstate the depth and breadth of China’s involvement in such mediations. For one thing, respect for sovereignty, and a corresponding reluctance to be seen as interfering, remains at the very heart of China’s foreign policy.

For another, Beijing’s sheer lack of experience in conflict resolution hinders its capabilities.

But as China’s economic power and interests abroad continue to expand, we will also see its diplomatic confidence continue to grow.

Laura Barber is a doctoral candidate in International Relations at the London School of Economics. Her research focuses on Chinese foreign policy towards Africa with a particular focus on Sino-Sudan and South Sudan relations.

Alex Jackson is a political risk analyst based in London. His work focuses on politics, security and energy in Eurasia. He has conducted extensive political and security analysis of Afghanistan for a UK-based research group.