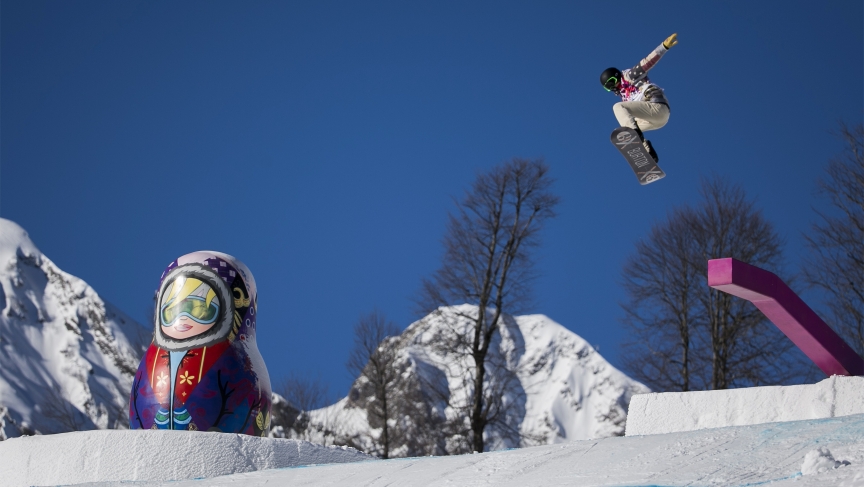 US snowboarder Shaun White goes off a jump during snowboard slopestyle training at the 2014 Sochi Winter Olympics in Rosa Khutor February 3, 2014.

Slopestyle snowboarding, the new event at the Winter Olympics, has snowboarders descending down a 2,083-foot course while performing freestyle tricks over an assortment of pipes, rails and three humongous jumps.

Organizers are making last minute tweaks to the course after some of the athletes complained it's too dangerous. (Editor's note: A video has emerged of a snowboarder doing a practice run.)

Norway's Torstein Horgmo, a favorite in this event, is out of this year's Olympic games after breaking his collarbone during a practice run. Another competitor, Canada's Sebastian Toutant, says the course felt like "jumping out of a building."

The BBC's Nick Hope, reporting from Sochi, has looked at the course and how the event organizers plan to make it safe. The following is an edited question-and-answer with Hope.

Give us an idea of what this course looks like?

A slopestyle run is designed to look impressive, but when you walk into the Extreme Park in Sochi, you just go 'wow' when you see the last jump. The jump is simply huge. It’s about 22 meters (72 feet) in height, which is like putting six school buses on top of one another.

And, remember, they go off the top pretty quickly, so the slopestylers get even higher than that. The other two jumps are around 18 meters high and, of course, they are farther up the hill. At the start of the run, there are three jibs (an assortment of pipes and rails that snowboarders do tricks on). The course drops just over 200 meters from start to finish and it’s pretty impressive to look at. It will look fantastic in clear weather on TV during the games.

What have the snowboarders been saying about the course?

They’ve been pretty much unanimous in saying that changes need to be made. But just how many changes need to be made is far less clear. Seamus O'Connor, who’s from San Diego but is representing Ireland at the Olympics, was pretty damning. He said the rails are too close together and the jumps have been overbuilt. Finland’s Roope Tonteri said the course simply wasn’t safe.

I spoke with members of the British team, and you could tell they were disappointed. Billy Morgan is an X Games finalist and world cup medalist who admitted that it was “a bit scary” on the Sochi run. He was certainly hoping for changes to the course. But this is not simply a case of saying that the jumps are too high. What appears to be wrong are the basic physics of the course. The lead up to the jumps are quite steep. That means slopestylers are losing speed as they approach the top of each jump. Meanwhile, the landings on the other side of the jumps are quite short. That means they’re getting something of a bumpy ride when they land.

This all comes against the background of Norway’s leading slopestyle medal prospect, Torstein Horgmo, crashing and breaking his collarbone after a fall near the top of the course. His teammate. Stale Sandbech. says Torstein was trying a particularly difficult trick at the time. Horgmo issued a short statement on Monday saying, "I am terribly sorry about this. Injuries and falls are a part of this sport but the timing is really bad. Now I just want to have a fast recovery and to get back on the board."

So, clearly Horgmo isn’t blaming just the course — but his experience does show how extreme this particular run really is.

What does the injury of Norway’s Torstein Horgmo mean for the competition? This guy was going to give guys like Shaun White and Mark McMorris a challenge, right?

It really is a blow to the competition. It’s not like alpine skiing losing Lindsey Vonn. But it’s still quite significant, because Horgmo was likely to be a big contender with the likes of Canadian slopestyler Mark McMorris. He was third in the world tour rankings this year. Then, there's the legend that is Shawn White. The American already has two gold medals in the halfpipe compeition. At Sochi, he's looking for another gold in halfpipe and, potentially, the first gold medal for slopestyle.

And let's not rule out the British, shall we? Billy Morgan could really deliver. He's one of the first to land a 'triple rodeo' back in 2011. He's had knee surgery, and he’s competing here without his anterior cruciate ligament. But if he stays upright, Morgan could be a major contender for a medal.

The slopestylers begin their campaign on Thursday with the qualification round. That comes a day before the opening ceremony on Friday. Those who make it through will then compete on Saturday in the finals.

What’s being done to make the course safer?

International Ski and Snowboard Federation technical delegate Bill van Gilder told me earlier that there would be action. "It's a common process that the athletes come to a venue and have concerns after the first day of training," he said. "Today's features were super-good, they just need a few tweaks to make them even better and the feeling I have is that everyone's 'stoked' with the course."

Well, I’d temper that slightly. I think most of the athletes feel there is a lot of potential for exciting action here, but they’re not convinced it’s ready. The organizers are going to be having further meetings here tonight, but the impression I have is that all three jumps will be reduced, probably by about six feet total.

How much is the warm weather playing into the problems?

This is creating massive problems. Much of the snow on the course is old, so it was stockpiled from last year or earlier in the season and there’s also a lot of artificial snow mixed in and it doesn’t appear to be responding the way the course officials would have hoped. It's too soft in some areas, too hard in others — and the raking equipment hasn’t been able to get onto the course, because it hasn’t been cold enough. If they start putting the heavy weight equipment on this run, it will simply break the course down. The forecast isn’t good in terms of any fresh snow landing. We’re expecting clear skies and suntans over the next 7 to 10 days at the moment, but it may get cooler at night. That could give the organizers more scope to make revisions.