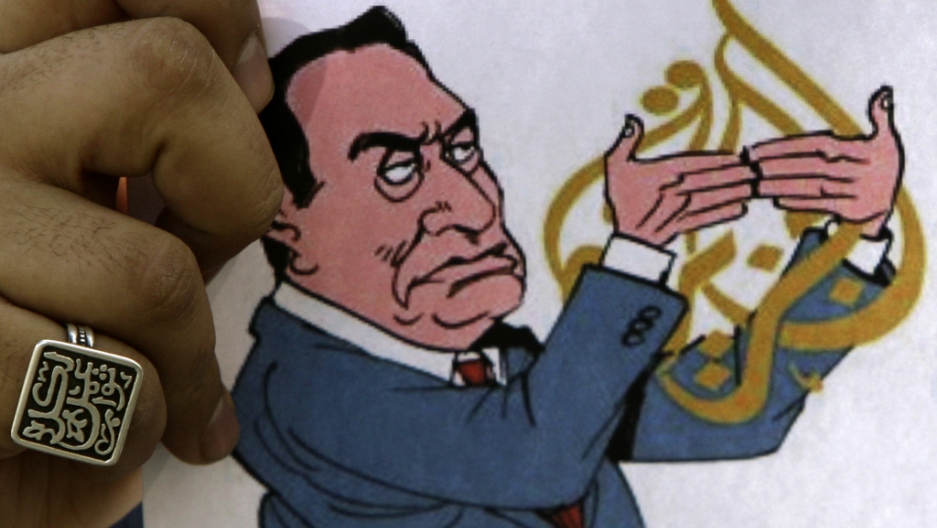 A drawing of former Egyptian President Hosni Mubarak blocking the Al-Jazeera logo during a protest against the closure of its offices in Egypt, Feb. 2, 2011.
Credit: Joseph Eid
Share

CAIRO, Egypt — In Egypt, journalists are being accused of terrorism.

Twenty Al Jazeera employees, including four foreigners, are to stand trial on charges of joining or assisting a terrorist group, as well as fabricating news to convince readers that the country is sliding towards civil war.

“The general prosecution has inspected the equipment, tools, media footage seized from the defendants,” read the state prosecutor’s statement, released on Wednesday.

“The media footage contains altered and modified video scenes using software and high-calibre editing equipment, and that they are lying scenes that harm the country’s national security.”

The case has provoked international outcry, and the journalists’ colleagues and supporters say they have been targeted for simply doing their job.

Here in Cairo, many are also arguing that the case represents something particularly sinister: the criminalization of journalism that does not fit the government’s narrative.

Egypt has grown deeply divided in the months since former president Mohamed Morsi was ousted in a July 3 military coup. The media is one of many arenas in which the country’s increasingly poisonous political battles are being fought.

The government says its fight against Morsi’s supporters amounts to a war against terrorism. “That means non-compliance is regarded as far more than simple ‘dissent,’" says H.A. Hellyer, nonresident fellow at the Brookings Institution.

This latest crackdown on criticism dates back to a sundown raid on Al Jazeera English’s makeshift office space in Cairo’s Marriott hotel in late December. The raid led to the arrest of bureau chief Mohamed Fahmy, a Canadian-Egyptian citizen, as well as veteran correspondent Peter Greste and freelance producer Baher Mohamed.

The three have been detained in Cairo’s notorious Tora prison for a month without charge. Now, they and 17 unnamed others employed by the network face a formal trial.

The Qatari-owned Al Jazeera network had faced mounting pressure from the Egyptian authorities since the coup that removed Morsi from power. Its Egyptian outlet, Al Jazeera Mubasher Misr, is one of the few remaining channels perceived as sympathetic to the Muslim Brotherhood, of which Morsi was a member.

As a result, Al Jazeera has become a target in Egyptian security forces' two-pronged crackdown against Islamist dissenters. In the resistive Sinai region, troops are trying to root out a growing number of jihadist militants who have based themselves there.

The police and intelligence services have also begun an aggressive nationwide crackdown on supporters of the Brotherhood, with at least 1,000 people killed and many more behind bars.

Although there is no evidence to suggest that the Brotherhood has links to the militants, it was formally designated as a terrorist organisation Christmas Day, and perceived bias towards the movement now attracts intense government pressure.

“Al Jazeera has been identified by the regime as the most significant source of pro-Brotherhood media that remains. In the context of the war on terror, accuracy in that regard is less important than clamping down,” says Hellyer.

Among the Al Jazeera employees being detained is 25-year-old Al Jazeera Arabic correspondent Abdullah al-Shamy. Family members say the young man has been held in squalid conditions, a fate now faced by thousands of other detainees, mostly Morsi supporters, who have entered Egypt's overcrowded prisons since July.

Why other reporters are worried, as well

The network’s demonization has had significant ramifications for foreign journalists working in Egypt. Not only has it crystalized a government narrative regarding the bias of international publications, but it has also led to significant hostility from the Egyptian street.

Crucial to this narrative of international media bias is the belief that international reporting has not given enough credence to the role of mass demonstrations in toppling Morsi. Many Egyptians believe that the decision of many outlets to label the event as a coup reveals a bias towards the Brotherhood.

Analysts say that, in the case of Al Jazeera specifically, the network's Qatari ownership has also played a key role. The Gulf state was a strong ally of the Brotherhood when it was in power, and the editorial line of the network’s Arabic channel — editorially separate from the English-language outlet that employed the 20 who face trial — has been particularly affected. They say it often features inflammatory and even sectarian rhetoric.

The number of physical attacks on reporters has shot up in the months since Morsi’s ouster. Last week, a video posted on social media websites appeared to show a police officer threatening a camera crew working for an Egyptian television station that if they did not stop filming, he would tell bystanders that they worked for Al Jazeera.

And as the crackdown against the network continues, Egyptian officials are offering little clarity on whether or not a journalist might be punished for meeting with a member of the Muslim Brotherhood.

In a statement on Thursday, the State Information Service said that although it welcomed balanced coverage, “assisting or inciting” accused criminals could be a punishable offense, an apparent reference to the process of interviewing Brotherhood members.

In response, journalists from more than 30 international media outlets have penned an open letter to the Egyptian authorities, calling for the release of the Al Jazeera detainees and highlighting their worries for the future.

“The arrest of these journalists has cast a cloud over press and media freedom in Egypt,” it reads. “We strongly believe that upholding the rights of journalists and permitting the free flow of information is vital to bringing about greater understanding and serves the best interests of all Egyptians and the world.

On Saturday, the United Nations also expressed its deep concern over the rising pressures that journalists now face.

Rupert Colville, spokesperson for the Office of the High Commissioner for Human Rights, told reporters in Geneva that the “systematic targeting of Al Jazeera staff” had damaging implications for freedom of expression in post-Morsi Egypt.

As Egypt moves uneasily through its new era, the government’s self-described "war against terrorism" is likely to have ongoing implications for those who voice open dissent.

“'The war on terror’ animus is being combined with the building of a new political regime entirely, says Hellyer, "and that in itself makes for a very difficult environment for dissent to be treated as anything but treason and sedition.”