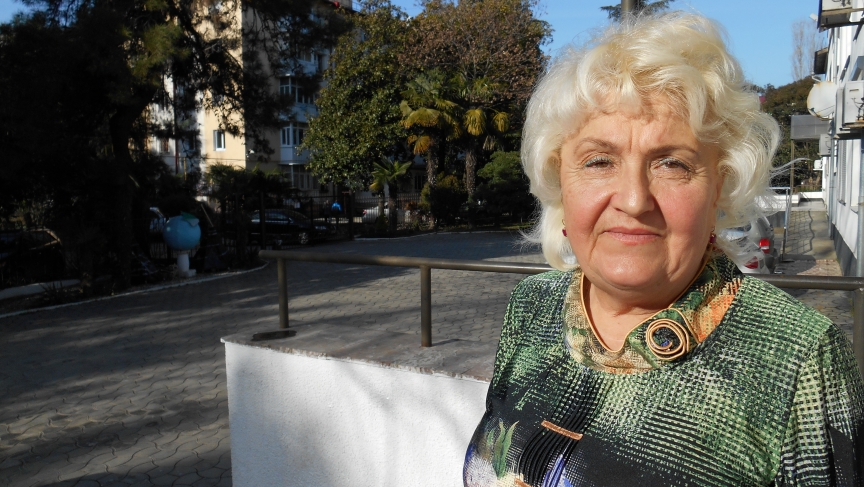 Lyubov Varicheva teaches English at the Sochi College of Multicultural Education in Russia. She says because of "volunteering" demands on teachers here, her students probably won’t get much in the way of instruction during the Sochi Winter Olympics.

On the eve of the Winter Olympics, Sochi is having some last minute jitters.

Russia’s southern-most city, lying between the Caucasus Mountains and the Black Sea, has largely been a domestic resort town. But Russian president Vladimir Putin spared no expense to make Sochi an international destination of the Olympics. The games have become the most expensive in history, at an estimated cost of between $15 billion and $50 billion.

But those figures, high as they are, don't count the cost to Sochi residents themselves. “Sochinets,” as residents there are called, have sacrificed their time, money, and more for the Olympics.

When I tried to speak with a travel agent on Sochi’s main pedestrian mall, she looks petrified.

Sochi residents who speak English are in demand day and night — as “volunteers.”

“During the Olympic Games, I will be the organizer of 10 volunteers, and we shall meet and see off our guests at the airport,” says Lyubov Varicheva,* who teaches English at the Sochi College of Multicultural Education.

Those teachers who don’t speak a foreign language have been mobilized for a different sort of volunteer work, such as cleaning newly finished hotel rooms. This strains the meaning of “volunteering,” as Varicheva puts it, but she doesn’t want to criticize the city administration for making demands on her and other professors. Varicheva says students shouldn’t expect to see much of their teachers over the next few weeks.

“If the teacher worked during the whole night, it is impossible to come and teach his students at school,” she explains.

Varicheva and other Sochi residents are quick to say they’re grateful for the huge amount of infrastructure Olympic spending has brought to their city. For the first time, the city has several high-speed rail lines. Mountain tunnels and bridges for the railroad, plus a new highway, have turned Sochi into one most expensive construction projects in Russian history.

But in a modest office above the new freeway, a private contractor named Karim Safarovich complains he hasn’t been paid for the work he’s done.

Safarovich is from Uzbekistan but has lived in Sochi for 24 years. He says he got a contract 3.5 years ago to build dormitories for some of the security forces stationed in the city, but Safarovich claims things went bad with his bosses when he asked to be paid.

“When the whole money thing was brought up, the people who owe me money started a fight on the construction site. They had me put in jail for 10 days so that I wouldn’t ask for the money,” he says.

After that, they told him that they had the police and prosecutors in their pocket. Go ahead and report it, he says they told him. It won’t help.

"And now they’ve blocked my phone — I can’t call anyone,” he says.

Safarovich says he’s owed close to $450,000, which he needs to pay his workers. So he’s sought the help of an advocate for migrants, Semyon Simonov. While the Russian government has acknowledged a problem with unpaid contractors in Sochi, Simonov says it’s much worse than they admit.

“Just from those people who’ve come to me, there are at least 22 unpaid contractors who haven’t been paid,” Simonov says. “It’s tens of millions of rubles — and hundreds of workers.”

Simonov says the anti-immigrant mood in Russia makes it hard for Central Asian subcontractors to fight for their rights in court. And now that the Olympic facilities are all but finished, they don’t have much leverage.

Within sight of Simonov’s office is a gleaming new train station; just beyond that, you can see the Black Sea. Alexei Kravets used to live here, right on the coast. Two years ago, I visited him as he was squatting in his own home, without water or electricity, fighting an eviction order. Authorities had condemned the entire neighborhood to expand the railway.

A few months after my visit, contractors from Olimpstroi, the Olympic builder, put up a tall steel fence around Kravets’s house. Then they brought in wrecking equipment.

“People began to throw my belongings out of the house and tear the thing down,” he says. “All my possessions were thrown out into the rain.”

We stand near the spot where Kravets’s house and garden once stood. He wants me to see what’s replaced his home — a parking lot and a square of manicured grass.

Many Sochi residents say they’re excited for the chance to show off their city to visitors from around the world. But Kravets has no such feelings.

“Visitors looking through a train window will see one sort of picture,” Kravets says. “A big train station, billboards for Sochi 2014, all kinds of beautiful sites and so many guests. It’s all happiness, but only for visitors. For those of us removed from here, there’s no happiness at all.”

*Update: A previous version of this story incorrectly spelled Lyubov Varicheva's name. We regret the error.