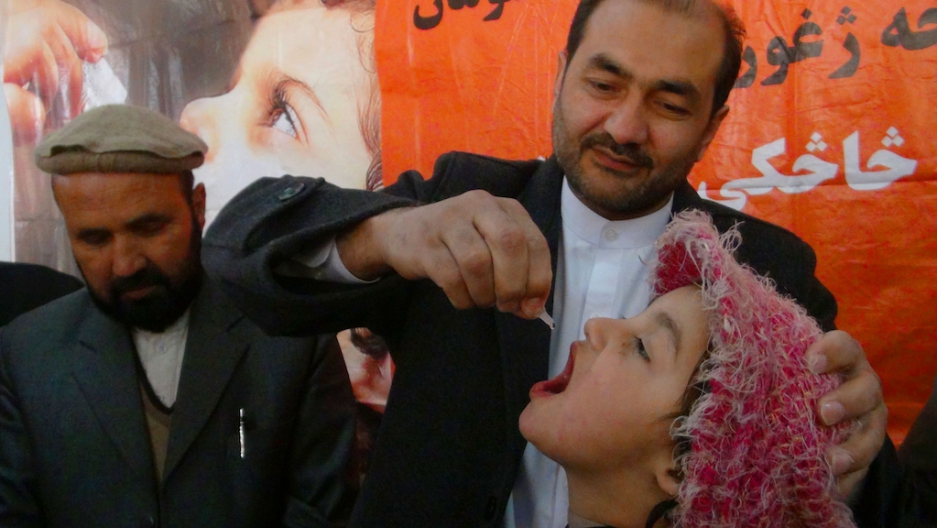 An Afghan health worker administers polio vaccine drops to a child during the first day of a vaccination campaign in Jalalabad, Nangarhar province on December 29, 2013. Polio, once a worldwide scourge, is endemic in just three countries now - Afghanistan, Nigeria and Pakistan.
Credit: Noorullah Shirzada
Share

With one arm, the woman clutches a sleeping baby to her chest. With the other, she’s waving away a polio vaccination worker who has come to her home in Agwanpur, India.

“We have told you earlier, and we will tell you again: we don’t want the vaccine,” she says. Her whole body is tense, shaking with each emphatic flick of the arm. “Consider this your home,” she says. “Come whenever you want. But never to discuss this vaccine.”

The scene, from a 2009 UNICEF video, illustrates one of the last remaining obstacles in the world’s quest to wipe out polio, a highly contagious virus known for paralyzing its victims. Aggressive global vaccination campaigns have wrangled the number of polio cases down from 350,000 in 1988 to less than 400 in 2013, according to the World Health Organization. Still, polio remains endemic in Afghanistan, Nigeria and Pakistan, where social resistance — often punctuated by violence — and other challenges, such as poor record keeping and mobile populations, have prevented eradication.

India, long considered one of the most difficult places to unroot the disease, managed to innovate its way around such roadblocks by, among other things, switching vaccine formulas and devising a high-tech tracking system. Between 2009 and 2011, the country cut the number of infections from 741 — the largest caseload in the world — to zero. Now India is celebrating three years polio free and its path to success has become a model for global efforts to stamp out the virus for good. It’s early still, but results of the scale up seem promising; in January, Afghanistan, Nigeria and Pakistan reported 40 percent fewer cases than the same time last year.

Many global health experts expected India to be the last country to eradicate polio because of its high birth rate, densely packed population and poor sanitation, said Jon Abramson, chair of the Strategic Advisory Group of Experts, which counsels the World Health Organization on global vaccine policy. Much of the country’s terrain was difficult to traverse and pockets of the population resisted inoculation. But getting the vaccine dispersed wasn’t India’s only problem. Some children already had been vaccinated five or six times and were still getting sick.

“These kids did not seem to be responding,” Abramson said.

In 2009, India took a gamble and switched to a different vaccine. Around the world, the most commonly used vaccine protects against all three strains of poliovirus, called PV1, PV2, and PV3, said Abramson, who, as part of his duties for WHO, helps to oversee the global plan to eradicate polio. But PV2 hasn’t been seen anywhere in the world since 1999, and research studies found that babies who were only inoculated against PV1 and PV3 had higher antibody levels against those strains than babies who got a dose of all-in-one vaccine.

Based on this evidence, India started distributing a bivalent vaccine that excluded PV2. It was the first country to scale up the research.

When a coalition of global health leaders, including WHO, UNICEF, the US Centers for Disease Control and Prevention and private funders, gathered in 2013 to craft an updated global strategy to end polio under the banner of the Global Polio Eradication Initiative, they referenced India’s success and included a goal to switch to the bivalent vaccine by 2016. The coalition’s plan aims to end polio by 2018.

Afghanistan, Nigeria and Pakistan are already beginning to phase out the three-strain vaccine. Between January 2012 and September 2013, the bivalent vaccine was administered in 11 of Nigeria’s 15 mass vaccination campaigns, according to the CDC. Similarly, 12 of Pakistan’s 16 campaigns and 9 for Afghanistan’s 14 campaigns used the new vaccine.

By itself, though, even a more effective vaccine isn’t enough to curb polio. In Pakistan and Afghanistan, research suggests that despite the switch to the bivalent vaccine, low coverage due to social resistance and armed conflict have not declined as quickly as expected.

In the last year alone, more than a dozen polio workers have been killed in Pakistan, where Taliban militants have declared polio vaccination campaigns a front for Western espionage. Last month, three health workers were gunned down in Karachi; a bicycle bomb aimed at a vaccination team killed seven in Peshawar.

Some Nigerian Muslim leaders have spoken out against polio vaccinations as well, claiming they cause infertility.  Many parents in the populous African country don’t trust western immunization workers because of lingering anti-colonial sentiment.

All three countries are now piloting a program first developed in 2001 to address social resistance in India. Under the social mobilization effort, India hired more than 8,000 community members to go door to door to talk with parents about their vaccine reservations and attempt to resolve their concerns.

“The atmosphere was somewhat dangerous,” said Sahnaz Parveen, one such mobilizer, in a UNICEF video about the program. “People would fight, get angry at the mention of polio … Sometimes they would throw us out of the houses and slam doors behind us.”

Mobilizers like Parveen were selected from the community because their peers respected them, said Naveen Thacker, president-elect of the Asia Pacific Pediatric Association.

“We also mobilized doctors and religious leaders,” said Thacker, who, as a pediatrician, was recruited to help get the word out. “The message has to come from someone parents feel they can trust.”

In the Indian state of Uttar Pradesh, for example, health leaders in 2007 observed that 70 percent of polio cases were Muslim children, so they organized a committee of religious scholars to speak to community members about the benefits of the vaccine. Within a year, the percentage had dropped to 37.

Now, the Muslim scholars who helped to eradicate polio in India are volunteering their time in Pakistan.

Overall, the Global Polio Eradication Initiative reported that during the first six months of 2013, the number of community mobilizers in the three endemic countries increased 40 percent, from 4,806 to 8,607. According to Pakistan’s polio campaign, community mobilizers had a 70 percent success rate persuading parents who opposed the vaccine to inoculate their children.

“We know that some militant groups are against the vaccination program in Pakistan and so our campaign will be fraught with serious risks,” Mahali said. “Yet, we are ready to undertake the mission because it is for a noble cause.”

Devising a plan to reach every child

“Our experience in India made it clear that you can’t just go in and say, ‘This region will get two million doses. Go, vaccinate everybody,’” WHO’s Abramson said.

After such top-down vaccination campaigns, teams would report 70 percent coverage rate, he said. But follow up surveys showed the reality was closer to 30.

So India developed micro maps, breaking regions down by neighborhood, by street, by house. The goal was to make sure no child fell through the cracks. The government employed global positioning system and geographic information system technology to track mobile populations. It even set up vaccination booths at railway stations.

Afghanistan and Nigeria both added micro-planning and house-to-house visits to their polio programs in 2012, according to the Global Polio Eradication Initiative, bringing the vaccine to neighborhoods that have been completely overlooked during years of campaigning. In Nigeria, vaccination workers now use mobile phones equipped with GPS mapping applications to track their movements. India provides technical assistance.

“The scale of the effort in India and innovative, home grown strategies and locally appropriate solutions … has set an excellent example for dealing with other public health problems,” Ayesha Raza Farooq, head of Pakistan’s polio eradication initiative, wrote in a letter to India’s Ministry of Health last month, expressing Pakistan’s desire to learn from India’s example.

“The government of Pakistan is trying its best,” Safdar Rana, a senior health official in Islamabad told the Wall Street Journal. “But we need to be supported by all means possible.”

More from GlobalPost: Polio: A common enemy from Syria to Somalia (Q&A)