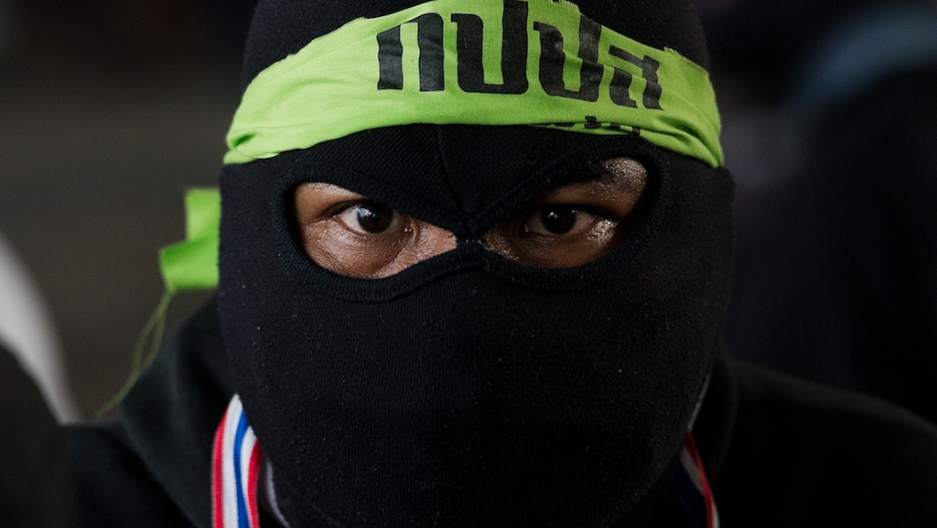 A Thai anti-government protester takes cover in Bangkok on Feb. 1, 2014, after violence erupts with explosions and heavy gunfire. Protesters managed to thwart polling in enough districts to block a new government from forming. Now all eyes are on the army.
Credit: Nicolas Asfouri
Share

BANGKOK — When Thailand’s top general speaks of coups, his words are read like tea leaves. Just as US economists decrypt the Federal Reserve chair’s verbiage, the Thai punditry analyzes their army chief’s phrasing down to the last syllable.

Thailand, paranoid over coups even in its best years, has shifted into round-the-clock coup watch. The nation’s dour military head honcho, Prayuth Chan-ocha, is the man who decides whether the tanks will roll. The general is now so beset by questions over potential plots that he recently snapped at the press.

“Why do you keep asking me so often?” he shot back.

But even that quip was dissected in hopes of glimpsing the general’s inner thoughts.

Since it left behind the direct rule of kings in the 1930s, the Southeast Asian nation has racked up 12 effective coups and 11 failed attempts. The nation has carried this bad habit into the 21st century. The last army takeover was just eight years ago. And now the Thai public is rightfully fretting some sort of coup will go down in 2014.

There are plenty of reasons to worry.

Thailand’s government is besieged by an uprising that has invaded ministries, threatened to abduct Prime Minister Yingluck Shinawatra, and blockaded Bangkok’s streets for months on end. Their goal is to replace the elected government with a handpicked council promising to purify the nation of corruption before restarting elections in a year or so.

Although this self-proclaimed “people’s coup” movement has waned from a high of 200,000 protesters to fewer than 10,000 on most days, on Sunday it sabotaged a national election by nabbing ballot boxes and mobbing polling stations.

The uprising dressed up its sabotage campaign as a “National Picnic Day” graced with celebrity appearances. But many Thai voters robbed of their day at the polls were in no mood to picnic.

“They’re wicked. Their idea of freedom is so strange,” said Maseeya Kafeen, a 23-year-old would-be voter whose precinct was shut down. “It’s supposed to be one person, one vote — even for people who work in the fields. They’re out here because they can’t win through elections.”

Historically, this sort of dysfunction entices Thailand’s military to take control in the name of restoring order. Key uprising leaders often seem to beckon intervention. On protest stages, the army is repeatedly implored to “stand beside” the protesters and protect them as they crusade against the government.

But these are more complex times for coup plotters.

Thailand has an absurd number of generals and admirals, roughly 1,750, nearly double the number serving the United States — a behemoth with five times the population and an intercontinental military presence stretching from the sea to space.

At this point, the Thai generals do not appear eager to complicate their lives with a messy coup. Many occupy key positions within corporations and are more familiar with board rooms than battlefields. A Thai generalship is a sweet gig, a fountain of wealth and prestige. Few appear eager to descend into the netherworld of direct governance.

“A coup is the last resort in the military’s mind. A desire to have a coup is against our time and democratic world trends,” said Kriengsak Chareonwongsak, a Thai legal scholar and senior fellow at Harvard University.

“I think they’re calculating seriously and hope they won’t be pushed,” Kriengsak said. “But when there are a lot of clashes going on — killing, blood spilling — they don’t know what to do ... they’ve learned their lesson but may be dragged in because of necessity.”

Events pushing them to a “last resort” scenario, however, are underway.

The uprising has already led to spilled blood. At one precinct, a crusade to block polls met with resistance and spiraled into a gun battle. Late-night shootings and bombings on uprising camps are increasingly common; their own vigilantes have beaten and choked voters en route to polls.

The danger, Kriengsak said, is that battles between mobs for and against the uprising will become more grisly and frequent, compelling the military to intervene. “It may escalate badly,” he said. “It may even get to the level of civil war if we’re not careful.”

A major factor keeping the military at bay is the threat of armed, organized resistance. Thailand’s current ruling party, Pheu Thai, was victorious in a 2011 election secured with the help of a street faction known as the Red Shirts. In 2010, they too blockaded Bangkok but fought to force elections, not halt them.

The Red Shirts were ultimately driven out by a violent army crackdown that left nearly 100 dead. But in the run-up to their defeat, militants within their ranks suddenly emerged to fend off an initial army raid by firing on soldiers, snatching guns from their hands and even tearing apart their armed personnel carriers.

This is just a taste of the resistance the army may face if it dares to stage an outright coup. The military would likely be further isolated by an international community that tends to sympathize with a pro-elections resistance over an unelected junta. The more daring Red Shirt factions have already promised armed backlash if the government is toppled.

This is the reason Thailand’s next coup could be anything but outright.

Perhaps the more probable end to the current government is through a sort of coup 2.0 — a barrage of rulings from courts backed by the army-linked old guard that dissolve the ruling party under allegations of misrule. Like almost all parties in Thailand’s history, Pheu Thai is riddled with corruption allegations, and many appear quite legitimate.

“They’re going to create a sort of pseudo-legitimacy, with violence, plus verdicts from the courts saying this government needs to come down,” said Verapat Pariyawong, an independent legal scholar who has both advised and criticized the government. In that scenario, the void could be filled by an unelected people’s council.

This would allow the army to claim that “we’re not staging a coup. We’re obeying the true powers,” he said. “In my mind, it’s the perfect coup. A new type of coup.”

But that outcome carries the same risks: heavy and perhaps violent organized resistance from Thais who feel their electoral choices are squashed by well-heeled elites. “Even in that case,” Kriengsak said, “a violent reaction could come from Red Shirt sympathizers.”

Thailand, the largest economy in mainland Southeast Asia, is far from a failed state. Its trains run and its banks are solvent. The uprising is isolated enough that tourists flocking to its beaches and bars are unlikely to witness any sort of political strife firsthand.

But with its government beset by a “people’s coup,” and the uprising refusing to back down, all signs point to bigger and deadlier political clashes in 2014.

The best hope, Verapat said, is that the country will emerge stronger and more democratic after a period of bloodshed. After all, he said, it worked for America.

“The US spent 200 years fighting against itself: the north against the south, the uprising against the British,” Verapat said. “It took them very long for someone black to become president or even for women to vote.”