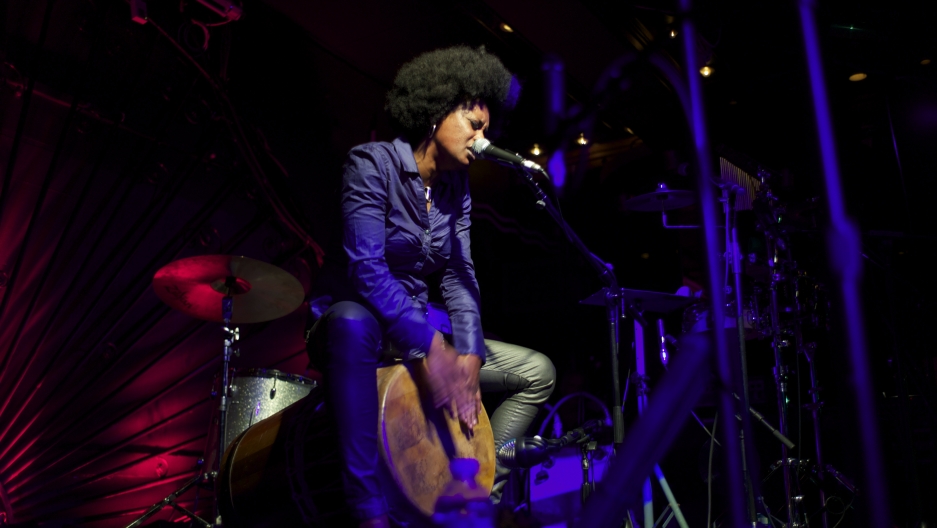 Some musicians sing, but many are instrumentalists, and their voice comes out of those instruments.

It's not always easy to understand what they're saying. Sometimes they say a lot.

Take Christine Salem. She's in her 40s and is from the French island of Reunion located in the Indian Ocean.

Salem is a percussionist. She’s been playing the drums since she was in her mom’s belly, she says.

And she sings, too. But, it's the percussion that where she says she really feels like her soul.

“Percussion just feels like an instrument that takes me inside myself,” says Salem. “It's more than an instrument. The bass resonates so much inside me that from time to time, in the middle of a concert, it'll drive me to sing a new song, a creation out of the blue."

Salem grew up in the capital of Reunion, Saint Denis.

She says she was a street kid, a tomboy.

She played soccer with the boys and got into trouble.

Christine says that her date of birth is highly symbolic to her: December 20th, the day, slavery was abolished in Reunion in 1848.

Her entire life, she and the other black residents of Reunion were taught that they may be officially French, but in reality, they were made to feel otherwise.

“When I was in school, we were told that if you don't speak French in class, you will never be allowed to speak," she says. "So, we were actually scared to express ourselves. That was really frustrating.”

“We were also being told that our ancestors were Gaulois, from France,” Salem remembers.

“I mean, that part of my life really affected me. And it's why my whole life I've been finding ways to express myself.”

Things have changed in Reunion, at least in how their own history is taught in schools.

But as Christine Salem says, it's hard when you've been told for years that blacks are not able, that whites are better than you.

On the other hand, those are precisely the kinds of attitudes that pushed her own voice and her ability to drum out her own story.