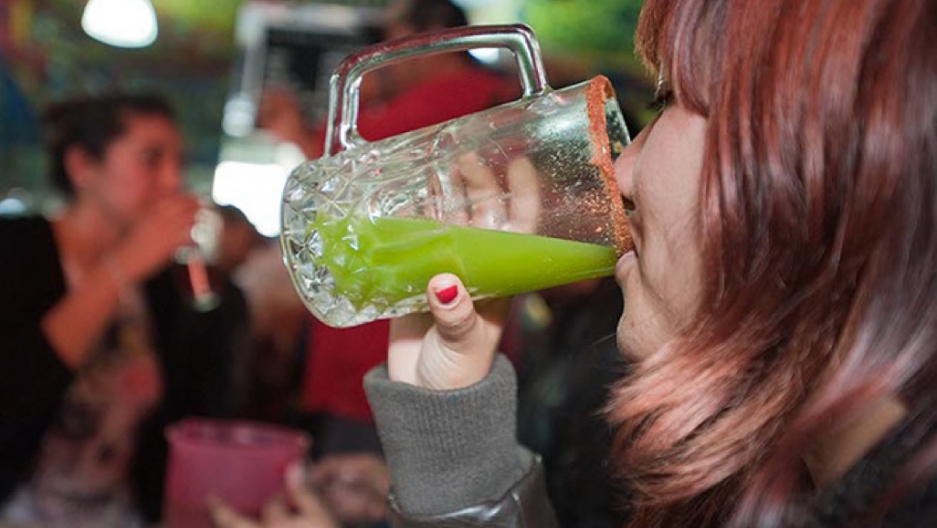 Once the drink of only Mexican country folk and urban construction workers, pulque, the fermented nectar of the maguey cactus, has found acceptance today among students and hipsters. This Mexican student enjoys a glass of celery-flavored pulque.
Credit: Keith Dannemiller
Share

MEXICO CITY — It's an hour before sunset on a Friday and the pulqueria is already pulsing.

Rock, cumbia and musica romantica beats from a jukebox along the back wall. Chattering drinkers pack tightly from the saloon-style swinging doors to the tile bar.

Heavily inked and pierced waiters wiggle through the throng, juggling sloshing pitchers and pints of what fans insist is the sap of Mexico’s ancient soul.

This is Las Duelistas, one of a surviving handful of down-market Mexico City dives serving "pulque" — say "pool-kay" — the mildly sour, slightly slimy and gently fermented nectar of agave.

Long the province of peasants and poor townfolk, pulque has been reborn this century as a buzz of choice among young, forward-leaning and better-heeled urbanites.

For those able to relish its taste and texture — admittedly still a select few — pulque provides a sip of the past, quaffed in the shadow of the modern.

It’s also just about $1.65 a pint, and a nearly hangover-proof means of getting hammered.

“All kids,” says David Bravo, a gray-haired barman at the 102-year-old Duelistas, meaning “duelers,” founded perhaps to calm nerves jangled by the Mexican Revolution. “Of every hundred people who come in now perhaps two or three are older.”

Pulquerias once flourished in Mexico’s capital and other cities. But they’ve been whittled away through a century of changing tastes and the growth of arguably more refined libations, particularly beer.

Though pulque remains popular in rural villages and towns across the central highlands, only a few dozen pulquerias tend to Mexico City’s teeming millions.

Yet in an ever-urbanizing landscape of glass towers and macchiato breaks, pulquerias offer “spaces where people meet their equals, where they can effectively scratch their asses without anyone complaining, think about anything, be politically incorrect,” argues Everardo Gonzalez, maker of the wistful 2002 documentary “Song of Pulque.” (Mexicans have dedicated a great many songs to the drink.)

“These places are necessary hubs,” he says.

An artist puts finishing touches on a Aztec-inspired mural in Las Duelistas, one of the most popular pulquerias, in Mexico City's historical center. (Keith Dannemiller)

Such nostalgia isn’t always apparent in the pulquerias where the hipsters gather. In those places, downing pulque seems more about making a statement than embracing a lifestyle.

“They treat pulque like a fad,” says Melly Leyva, 46, who has tended bar at La Hija de los Apaches, her family’s pulqueria a few blocks from the Mexico City coroner’s office, for more than 20 years. “They don’t value it as part of our culture, our traditions. They don’t know their history.”

Derived from agave juice — the same secretion from which both tequila and mezcal are distilled — pulque was prized by Aztecs for its religious and partying purposes alike. Their descendants long valued it as a salve for lives hard-lived.

Unlike its firewater relations, pulque packs about the same alcoholic kick as beer, or less. Flavored pulque — strawberry, oatmeal and celery among the popular variations — is even less potent. Devotees usually get sated before becoming sloppy.

“These kids are just drinking,” Leyva says of the hundreds of raucus 20-somethings crammed into her spacious bar on a weekend night. In spite of Layva's passion for pulque, most of her young buyers are drinking beer from quart bottles rather than agave brew.

Fanciful images of Aztec temples, princes and maidens paint the walls and ceiling in lurid greens, blues and reds. Two harried men ladle libation from wooden casks and plastic barrels behind the bar.

A few older men huddle over corner tables or behind a protective pillar at the bar. Giggling young women down pitchers of the drink, egged on by pleased male companions.

Matute, 33, has been frequenting Las Duelistas and nearby pulquerias on the gritty edge of the Mexican capital’s historical center for more than a decade. He’s watched them reborn from hovels filled with men passing long afternoons to these throbbing hangouts for nose-ringed youngsters.

Through the change, pulque’s lure has endured.

“This is my roots, like 1,500 years ago someone was feeling exactly like I do right now,” Matute, on his fourth or fifth glass, says in fluent English.

“The pulque has me.”

Correction: An earlier version of this article mistakenly described agave (maguey) as a cactus. It is not.