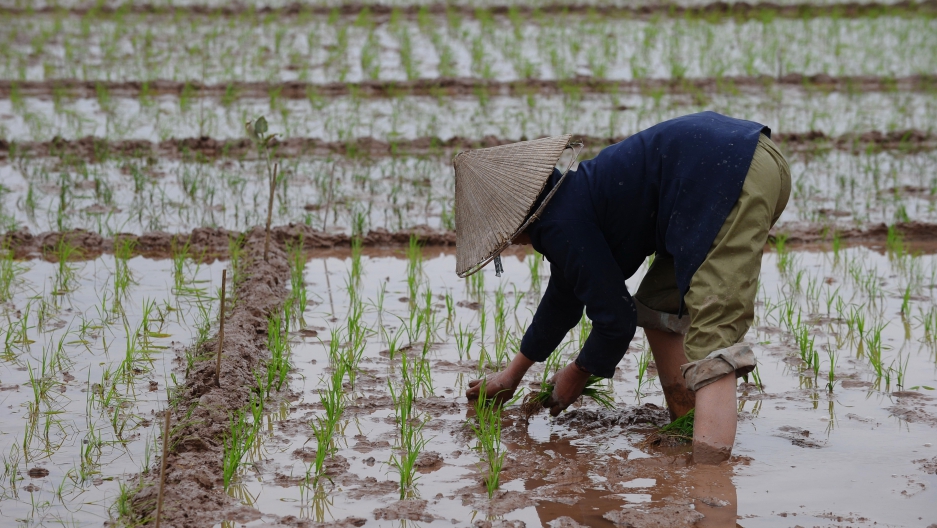 This photo taken on February 29, 2012 shows a farmer transplanting rice on her family's lot of land on the outskirts of Hanoi, Vietnam. After the village-sized collectives were broken up in the mid-1980s when the country began switching from a Soviet-style centralized-economy to market economy, each farm family was given a 20-year land lease. Land disputes with local authorities became an increasingly contentious issue in communist Vietnam where all land is owned by the state and usage rights are not always clear or protected.
Credit: Hoang Dinh Nam
Share

GENEVA — The world’s elites gathered in Davos, Switzerland last week for the annual World Economic Forum (WEF), paying $20,000 a person for the privilege of offering grand solutions to other people’s problems.

I was down the road in Geneva attending a decidedly low-brow, two-day expert workshop on agricultural trade and development. But downwind we could almost smell their champagne fondue, which no doubt helped the powers-that-be focus on the global food crisis.

WEF’s “New Vision for Agriculture” is their answer, which, along with the G8 nations’ “New Alliance for Food Security and Nutrition,” represent the bold new initiatives from the rich world to solve poor people’s hunger.

For all the newness, the world’s small-scale farmers can be forgiven for seeing little more than new bottles for some old wine, which they still can’t afford. The old wine includes an overwhelming focus on technological solutions, industrial-scale farms, and high-input methods often poorly suited to small-scale farmers.

The new bottles, though, look sharp. The labels show happy African farmers in lush fields, and they feature all the right catch-phrases: “sustainable agriculture,” “climate-smart production,” and of course “meeting the world’s food needs.” They look like they came out of a corporate branding campaign.

Basically, they did. The one new thing in this new wave of attention to agricultural development is the explicit leadership of “the private sector,” which at the international level generally looks like a who’s who of the top agribusiness multinationals.

The G8 led an impressive effort in 2009 following the spikes in food prices to marshal rich country funds to support developing country food production. That has since given to a drop in public funding, a narrowing of geographic ambition, and a heavy reliance on corporate leadership and investment.

This year, Vietnamese leaders led the cheers for the WEF’s New Vision, supporting the role of “public-private partnerships” (PPPs) in “integrating value chains” and promoting development. Vietnam, with its strong developmental state and highly productive smallholder rice farms, can afford to bring in international corporate partners. After all, the government has already transformed its war-ravaged land into a highly productive, smallholder-based rice exporter. The government is in a relatively strong position to negotiate with transnational firms.

There is no doubt that they need the investment. In many countries there is little private capital, nor the expertise manage to complex projects. Infrastructure is poorly developed, particularly in the areas of transportation — key to both domestic and international trade — and irrigation, central to raising agricultural productivity.

Such investments, though, have rarely come from the private sector. They are seen as public goods, in part because they are long-term investments with potentially a wide range of beneficiaries. And if the “public” part of the partnerships is to provide such investments, they will need international donor support to succeed.

The other challenge for the New Alliance is aligning its private funding with countries’ national development priorities. Multinational agribusiness firms are generally looking either to expand their markets — think Monsanto with its seeds and agro-chemicals — or to find new, inexpensive sources for their export operations — think mining companies or garment factories.

If an African government’s main priority is increasing the productivity of its domestic staple food producers, to improve the lives of the farmers and ensure the country’s food security in a world of volatile prices, it is less clear why private capital would be interested. Mostly, they’re not.

According to Kullman, "This will enable such things as affordability to import food, improve trade policy, better enable the free flow of food, build agricultural food systems and value chains, develop new ways to improve shelf life as well as the freshness and variety of foods available, and provide nutrition education to encourage healthy eating as incomes rise."

Look closely. All of these concrete steps bypass small-scale farmers. Instead, they increase imports, make those imports cheaper, put those foods into value chains dominated by multinational firms, and provide fresher foods to middle class urban consumers, whom they can encourage to eat the firms’ “healthier” processed foods.

For small-scale farmers trying to improve their production of staples, there’s no new wine in that pretty bottle. In fact, the bottle may contain nothing more than a concentrated dose of Dupont’s agricultural chemicals. Or a high-protein drink handout to make up for another poor harvest.

If the corporate partners in the New Alliance want to contribute to enhancing food security in Africa, they will need to show they are willing to be true partners with national governments, respecting their development priorities and making long-term commitments that do more than open markets for the firms’ goods.

Timothy A. Wise is the Policy Research Director at Tufts University’s Global Development and Environment Institute (GDAE). He is currently on an Open Society Institute Fellowship on agriculture, climate change and the right to food.