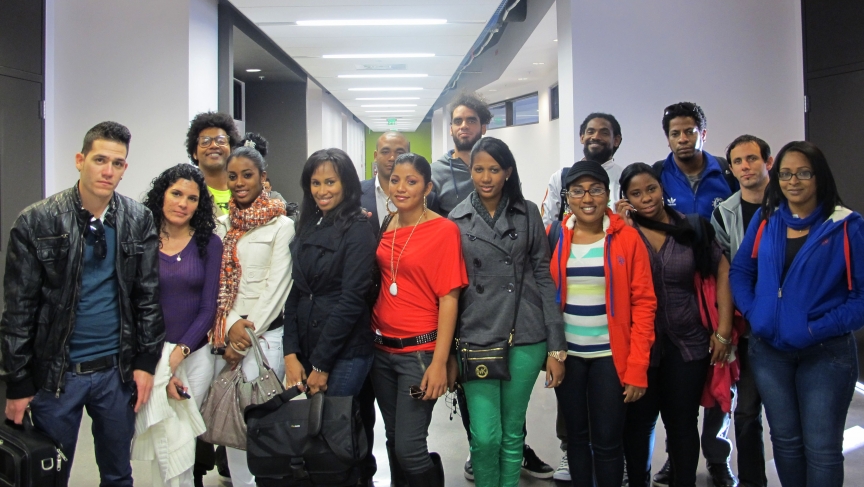 The Cuban students pictured here at Miami Dade College are doing the first academic trip of its kind since the revolution more than 50 years ago.

A group of Cuban students just arrived in the US with student visas in their passports. They'll attend classes at Miami Dade College and are taking part in the first academic trip of its kind since the Cuban revolution more than 50 years ago.

But how exactly did this program come about? And how was this particular batch of students selected to take part? Ted Henken, a professor at Baruch College in New York, knows about half of the students who are spending a semester studying in Forida.

Henken says the academic program was started by an organization called the Foundation for Human Rights in Cuba. The group has a history in Cuba, including providing cell phones to Cubans who don't have them. The foundation reached out to this group students, many of whom were forced out of Cuban universities for ideological reasons, and invited them to study in the US.

The Cuban government didn't have a say in the matter, Henken says. Cuban law requiring permission for any Cuban to travel abroad changed last year. Henken says there is now much greater freedom for Cubans to travel abroad than at any time since the revolution.

"So now, Cubans can leave the country for up to 24 months without asking permission from the Cuban government," he says. "Because of this new reality, Miami Dade College, in conjunction with the Foundation for Human Rights in Cuba, took advantage of this."

Still, there are many unanswered questions. Henken wonders if any of the students will return to Cuba at the end of the semester, and whether any of the Cuban universities will accept any of the academic credits they earn at Miami Dade if they do return.

Henken says he doesn't really know specifically why individual students were chosen, but he says many of the students were outspoken critics of the Cuban government. He's wary of only picking such students to study in the US.

"We don't want to repeat some of the practices, ideologically, that the Cuban government has engaged in," he says. "There's an old saying in Cuba that the university is for revolutionaries."

Henken says for the program to move forward and grow, it should be open to all Cubans regardless of their ideological background or connections.