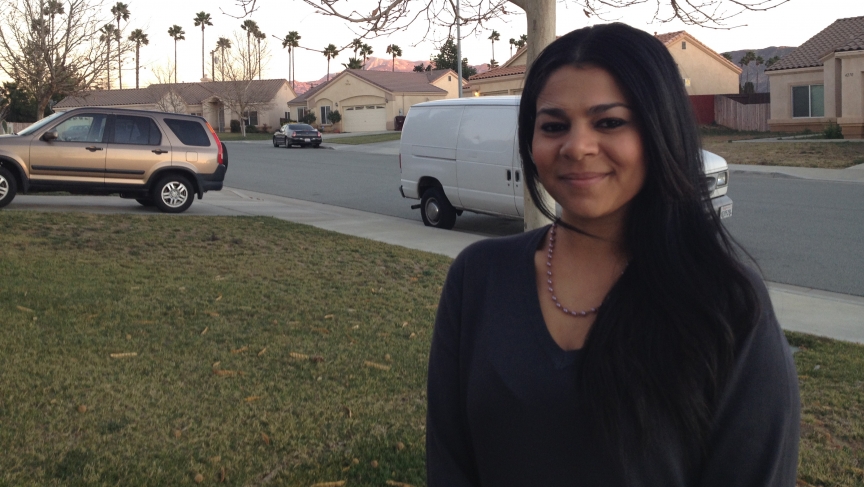 Things were tough with 10 brothers and sisters and barely enough money to feed everyone.

"You know you’re poor when you had a piece of bread to split between four kids, and that’s all your mom can get for the night," she says.

Still, Hall says, for the most part, she was a happy kid.

But then everything changed.

Her mom took her to a huge mansion outside of Cairo. Her sister worked there as a maid for a rich family. But when Hall and her mom arrived, the family confronted them about the sister. They said she had stolen money from them.

How was Hall's family going to pay off the debt, the rich family asked. Hall says the family had an idea.

"All of a sudden they said, 'OK, instead of sending your daughter to jail, you have to provide us with another kid,'" she recalls.

Hall says they were talking about her. "I didn’t realize it, but I was the one that was staying, and my mom left without me. She made her decision. It's not like I had any options. And that was it, she was gone."

Hall was now the property of that wealthy family. She was 8 years old.

Each day Hall got up, she cleaned, she washed the dishes. "I mean I was so little that I had to use a stool to get to where the sink was to wash the dishes," she says.

Hall says the worst part was the father.

"I remember one time, he took his belt off and he beat one of the girls with it," she says, "And as a kid, seeing that, I mean that just terrified me."

After two years, the family decided to leave Egypt and move to Irvine, in southern California. They said Hall hadn’t worked long enough to pay off her sister’s debts, so they took her with them.

Hall became a child slave in America, in a big beautiful suburban house. She worked from early in the morning to past midnight, and slept in a small room in the garage. Hall wasn’t chained or locked up. The family kept her from escaping in other ways.

She remained captive until one day in 2002. Immigration agents pounded on the door and took her away. Someone had made an anonymous tip. Hall still doesn’t know who it was, but she says it could have been a neighbor who noticed that she never went to school. Hall’s captors were later sentenced to several years in prison, and forced to pay her restitution. Hall was adopted by a foster family and later became a US citizen.

Hall is now 24, and lives in Banning, a few hours outside Los Angeles, with her boyfriend and 18-month-old daughter.

She's happy now. But some things remain unresolved, like her relationship with her mother back in Egypt. She gets emotional when she talks about it.

She says when she talks to people about being a slave in America, they can’t quite grasp that it’s real.

"It’s not like you want to shake people up, but you almost want to," Hall says, "It’s like 'wake up, this is really happening.' And you know what, you may not hear about it, all these things that happen in other countries, they bring it to us too here. Look at me, I came all the way from Egypt, all the way here to little old Banning."

Shyima Hall says that’s why she wrote her memoir, "Hidden Girl: The True Story of a Modern-Day Child Slave.“ To wake people up. As for her future plans, Shyima says she’d like to become an Immigration and Customs Enforcement agent, like the ones who helped rescue her.

She writes at the end of her book, "If you are a trafficker, watch out. I am getting ready to come after you.”