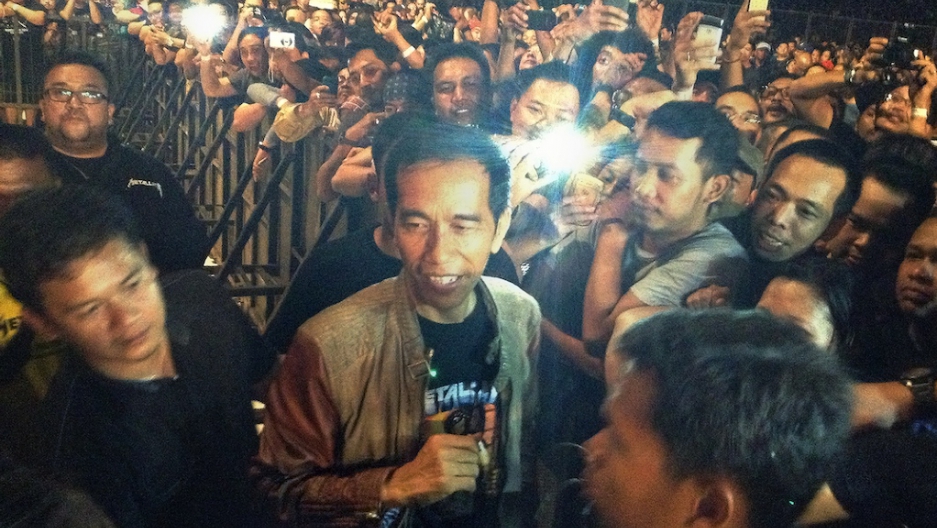 Jakarta Governor Joko Widodo (center, in black T-shirt and leather jacket), is mobbed by rock fans as he arrived to watch a Metallica concert at Jakarta's Bung Karno stadium on August 25, 2013. Polls give him a commanding lead in the Indonesian presidential election, although he has not yet agreed to run.
Credit: Olivia Rondonuwu
Share

JAKARTA, Indonesia — It’s that time of the year again in Jakarta. The rainy season, with its dramatic flooding, has hit the capital, leaving thousands of residents displaced, entire neighborhoods inundated and main roads turned into rivers.

The “annual disaster,” as local media call it, bears a particular political significance this year.

With elections just a few months away, all eyes are on Joko Widodo, the popular governor of Jakarta and front-runner to be Indonesia’s next president.

Opponents hope that a failure to mitigate the flooding — something Widodo promised to do when he took office in October 2012 — will finally tarnish his image. But experts doubt it will impact the popularity of a man who’s become a national phenomenon in just a matter of months.

“Jokowi,” as he’s locally known, is not yet a candidate for the July presidential election, but he’s already polling at 40 percent — four times the approval rating of his nearest competitor.

Just two years ago the Jakarta Post described Jokowi as a “confused migrant from a small village in Central Java who just arrived by bus at a dirty and thug-controlled Jakarta bus terminal.”

Now, he has won the heart of millions of Indonesians eager for change.

Barely known outside his hometown of Surakarta before taking over as Jakarta governor, the thin, humble 52-year-old has shaken up the world of Indonesian politics.

“Jokowi is just like ordinary people,” he says. “The way he talks, the way he dresses. … People see him as one of them.”

A fan of Metallica, Jokowi lived up to his regular-guy reputation by attending the band’s concert at the huge Gelora Bung Karno stadium last September — standing with the crowd, rather than in the VIP section.

More from GlobalPost: Jakarta's metalheads are thrashing for Allah (VIDEO)

Jokowi has also surprised Jakarta’s residents by engaging in something Indonesian politicians rarely do: getting out of the office.

Whether it’s to talk about education and health reforms with residents of the capital’s slums, or to listen to local market vendors’ problems, his trademark unscheduled visits to the streets are always welcomed by cheers of “It’s Jokowi! It’s Jokowi!”

Giggly women comment on his looks, and crowds of locals push and shove to shake his hand or take a picture.

Some dismiss his “blusukan” (“unannounced visits,” in Javanese) as a populist publicity stunt. He responds that his trips always have a specific purpose, and that he has never asked the press to follow his every move.

“By going around the city, I will understand the city’s issues better,” he said a few months after being elected.

Since the fall of dictator Suharto in 1998, Indonesian politics have been dominated by an elite tied to the former regime. The candidates lining up for the presidential election seem to be no exception. Jokowi’s closest rival, retired General Prabowo Subianto, was allegedly involved in the disappearance of pro-democracy activists under Suharto and in human rights abuses in East Timor.

Robinson says Indonesians have largely been disappointed in their leaders since democracy emerged in the country. “Corruption has continued, as did growing division of wealth and of large corporate conglomerates,” he explains.

In contrast, people see Jokowi as the man who will address the “frustrations they have to put up with in the day-to-day life,” Robinson explains. “Education, medical services, transportation, traffic, housing … things that Indonesians feel have been neglected.” Jokowi has a “record for getting things done,” Robinson says.

A former furniture retailer, Jokowi earned his reputation as uncorrupt and practical while mayor of his hometown, Surakarta. In 2012, he was awarded third place in a contest to identify the world’s best mayor.

While his promises to tackle the main issues of traffic congestion and flooding in Jakarta have yet to be fulfilled, Jokowi has been genuinly energetic since taking office, political analysts say. “He’s still trying to solve the problems, much harder than any [previous] leaders in Jakarta,” says Maswadi Rauf. Among other things, he has introduced free healthcare and education for the poor, and re-launched a 20-year-old public transportation project.

As part of his daily unscheduled inspections, Jokowi often pays a surprise visit to the city administration’s offices to check on the work of his own civil servants, a move much appreciated in a city with a notoriously slow bureaucracy.

As for the presidency, his party, the main opposition Indonesian Democratic Party-Struggle, is expected to announce its candidate after the parliamentary elections, in April.

Some wonder if Jokowi’s down-to-earth politics would work at a national level. During a recent interview with the Jakarta Post, Jokowi said he saw no difference between being a mayor, a governor, or a president. “They all work for the people,” he argued.

But if elected, Jokowi will face many new challenges.

“Politics in Indonesia are very complex, very fragmented,” Robinson says, adding that Jokowi would have to deal with big parties and oligarchs he’ll need support from, and who will be expecting pay-back.

Whether he has what it takes to impose his style from the top remains to be seen.