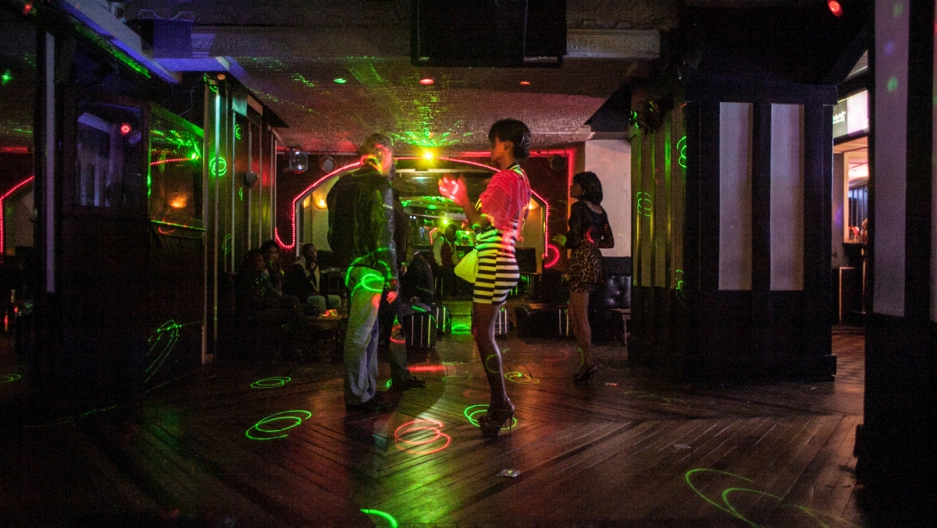 A nightclub in the town center of Antananarivo, Madagascar. Young prostitutes find most of their clients in such establishments.
Credit: Rijasolo/Riva Press
Share

MAHAJANGA, Madagascar — At nightfall, the girls gather in small groups along the waterfront and outside the sweaty nightclubs blaring West African pop music. Some are elaborately done up in makeup and colorful cocktail dresses. Others stand plainly in jeans and T-shirts. Most are somewhere between 13 and 17 years old, though they can be as young as 8 or 9.

There is no shortage of demand for their services. Despite an abundance of prostitutes of all ages in the resort town, minors are a popular choice among clients. Whereas an adult might charge about $10, a child’s services can go for as little as 50 cents.

“The Great Island has little by little developed the sad reputation as favored destination for sexual tourists,” stated a December report by Najat Maalla M’jid, the UN Special Rapporteur on the sale of children, prostitution of children and pornography involving children.

Madagascar has long grappled with the scourge of child prostitution. Yet since a 2009 coup d’état sent the country spiraling into political and economic disarray, the problem has reached crisis proportions.

Reliable figures are hard to come by, but M’jid said there is unanimous agreement among experts that “child prostitution in Madagascar is at an alarming level and has dramatically increased in these past years, particularly since 2009.”

The director of the Collective for the Rights of the Child and Family (CDEF) in Mahajanga, Sylvie Hanitra Rakotoarivao, said in December that 123 cases of child prostitution had been documented in Mahajanga, a city of about 200,000, over the previous month alone.

Foreign sex tourists account for much of the demand. In 2011, the last year for which official figures are available, 225,000 tourists visited Madagascar, a 15 percent increase over the previous year. Fifty-eight percent of those were from France, the former colonial power. And while most undoubtedly came to enjoy the country’s pristine beaches and lemur-filled forests, significant numbers arrived with less wholesome intentions.

In addition to Mahajanga, common sites for child prostitution include the resort island of Nosy Be; big cities like Diego-Suarez, Toamasina and the capital, Antananarivo; and mining towns like Ilakaka in the south.

At the CDEF office, Yasmina, 15, recounted her entry into this underworld in plain sight in 2012. Her parents had split and she’d moved in with her grandmother after being mistreated by her father’s new wife. But the grandmother was sick and Yasmina couldn’t afford to stay in school.

She started to sell beignets for pennies on the street. Yasmina said that one evening, a friend invited her to come out to the beach. There, she presented Yasmina to an older Malagasy man.

“He likes you. You’re going to go with him,” the friend instructed.

She earned almost $10 that night—more than the usual rate because she was a virgin and a fortune in a country where more than 9 in 10 live on less than $2 a day. Over a year later, she recalled the experience with disgust.

The money, though never as much as that first encounter, was too good to pass up in the months ahead. Her clients were a mix of Europeans and Malagasy. She would usually entertain five in a weekend, she said. Business was easy. Yasmina and several acquaintances would position themselves along the waterfront or on the beach. It wouldn’t take long for prospective clients to approach.

Since the 2009 coup, which led to sweeping cuts in foreign aid and government services, an already precarious economic situation has deteriorated precipitously. The country’s poverty rate has increased by 10 percent or more. Many children have been forced to leave school. Roughly a third between the ages of 5 and 14 are involved in economic activities, according to UNICEF.

But experts say that poverty alone is too convenient an explanation for Madagascar’s child prostitution epidemic. Many point to a growing normalization of these kinds of activities within Malagasy society.

“They no longer hide it,” said Haja Randrianianina, a UNICEF representative in Mahajanga. “It’s in the roads, in the restaurants, the bars, the nightclubs.”

Steven Lauwerier, the UNICEF country representative, added that child prostitution has become something seen as “trivial.”

In a number of documented cases, parents have actively solicited clients for their children. Among many Malagasy, snagging a rich vazha (foreigner) is viewed as a laudable aspiration for a young girl. In rural areas, some young girls are sold into concubinage for a period of several years to a foreigner or a wealthy cattle owner.

The Malagasy government has done little in response. Advocates complain that the local police are heavily understaffed while the gendarmerie tends to be uninterested or in the pay of the criminals. Fading signs in hotels that warn against bringing back minors surely don’t strike fear in too many hearts. Most accusations are handled with a quiet payoff to the victim’s family. Complaints that do reach a magistrate often drag on endlessly without resolution.

Grassroots initiatives like CDEF say they have started to make progress. More victims are coming forward and, for the first time in years, some offenders are being prosecuted.

But judging by the scene along Mahajanga’s main strip of nightclubs on a recent Saturday night, considerable work remains to be done. Plainly underage Malagasy girls drink and mingle with foreign men more than three or four times their age.

After being “extracted” from prostitution by a local children’s organization, Yasmina completed a training course to become a coiffeuse. Her goal now, she says, is to open a hair salon.

But she carries the shame of her previous work along with her. At the start of the interview with GlobalPost, she denied having ever worked as a prostitute. Later, after telling her story, she opened up about the men she used to sleep with.

“Every time I think about these men, I’m disgusted," she said. "Because they take advantage of our poverty."

Aaron Ross's travel in Madagascar was funded by a grant from the Pulitzer Center on Crisis Reporting.