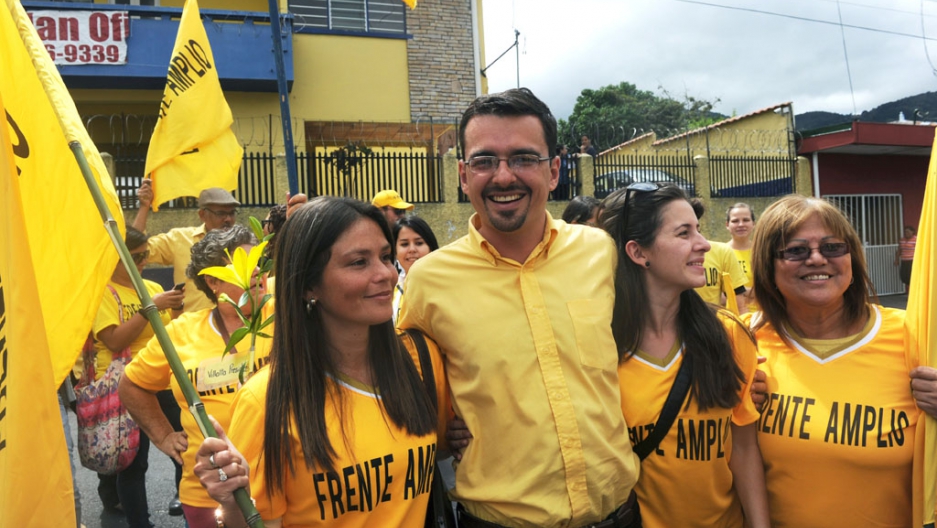 The rise of the left in Latin America could get a further boost Sunday with elections in Costa Rica and El Salvador.

In Costa Rica, a leftist win in the general election would be unprecedented.

In El Salvador, which is choosing only a new president, the left is represented by the FMLN – a party born from a guerrilla army that fought a civil war in the 1980s against an American-backed government.

The polarized race between right and left is close is both countries, and a run-off may be needed in both cases, polls suggest.

The election day is the same, but not much else.

The leftist parties in the two countries, the countries themselves, their histories and the candidates are very different, said political analyst Roberto Canas, who teaches at several universities in San Salvador.

In Costa Rica, a young lawmaker and conservationist named Jose Maria Villalta, 36, and of the Frente Amplio (FA) party is among the favorites, along with former San Jose mayor Johnny Araya, 56, from the ruling right-wing National Liberation Party.

"Support for the FA is multi-ideological. Villalta is benefiting from discontent, a protest vote not just against the political system, but also the economic one," said political analyst Jaime Ordonez

"That is why the left is on the rise in Costa Rica," added Ordonez, head of the Central American Institute of Governance.

The FMLN ended 20 years of Arena rule in elections in 2009 and brought the left to power for the first time in the poor Central American country.

But then, their candidate was a moderate journalist, Mauricio Funes.

This time, the FMLN is drawing on someone from their former military ranks, an ex-rebel commander, to halt the right's drive to retake power.

The Costa Rican elections the situation is more up in the air. Two more hopefuls, rightist Otto Guevara and center left Luis Guillermo Solis, are close behind Araya and Villalta.

"If there were only two forces like in El Salvador it would be easier to define. What is happening is that everything is really spread out," said Costa Rican analyst Victor Ramirez.

If no candidate wins a minimum of 50 percent in El Salvador and 40 percent in Costa Rica, runoffs will be held March 9 and April 4, respectively.

Although the leftist parties in the two countries are distinct, a win in Costa Rica and El Salvador would strengthen that influence of a movement that, albeit with nuances, is ruling most countries in Latin America.

It could also offset the balance in Central America, where conservative governments rule in Guatemala, Honduras and Panama, and the left in Nicaragua.

"I don't think the United States is thrilled. Nor are Central American business leaders who have cross-border investments. They invest in parties and cash in later," said Canas.

Two political models are being put to the test. The right-wing parties in both countries are neo-liberal, free market ones.

The leftist parties prefer a larger role for the government, but they take pains not to antagonize the United States, which is Central America's main trading partner.

In the case of El Salvador, the United States is the main source of remittances from emigrants, and crucial to propping up the economy.

"I don't think either seeks broad transformation in the political model. It is not that the Cuban revolution is on its way to these two countries, or Venezuelan Chavismo," said Canas.

He said that if they win the FMLN and the Frente Amplio will have to undertake unpopular economic measures to boost the economy.

In Costa Rica, things were so polarized that the right did start making mentions of Cuba, Venezuela and Nicaragua. The Frente Amplio derided this as a "campaign of fear."

The Supreme Electoral Tribunal even reprimanded two companies for recommending their employees not vote for "the communists."