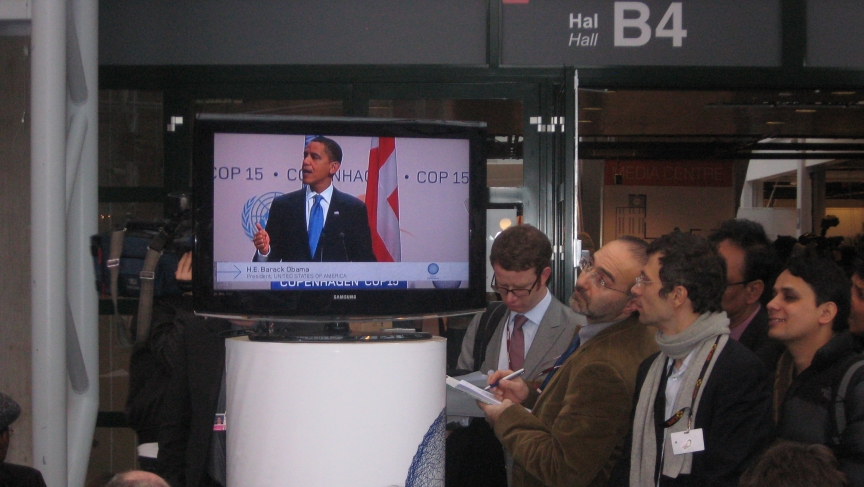 Journalists and others watch President Obama's speech to the UN's 2009 climate change summit in Copenhagen. A new document leaked by former NSA contractor Edward Snowden suggests that electronic eavesdropping gave the US advance notice of other country's negotiating strategies.

The latest NSA targets to be revealed by Edward Snowden’s purloined document archive might surprise you: participants in the high-stakes UN climate change conference in Copenhagen in 2009.

The latest revelation comes from a joint reporting project between the Huffington Post and the Danish newspaper Information, which says it got a top secret NSA briefing paper on the negotiations from Snowden.

The document, which the news outlets have published online, is barely more than a page, and is dated December 7, 2009, the opening day of the Copenhagen conference.

Most of it reads like an article a news summary of the basic issues and conflicts heading into the summit, but it’s distinguished by two short paragraphs at the end of the document marked “TS”—for Top Secret—and “SI”—for Signal Intelligence, or electronic monitoring.

The first of those sections refers to a report detailing efforts by China, long the US's biggest adversary in climate negotiations, to coordinate its negotiating position with India. It also refers to a secret proposal by host country Denmark to launch a so-called "rescue plan" in case the negotiations started to go off the rails. Both suggest that the NSA most likely had gained access to private conversations about those plans.

The same paragraph also says NSA analysts would continue to provide updates throughout the conference along with "second party partners." Those “second part(ies)” are other countries whose intelligence services the US was working with, indicating that the US wasn't alone in this spying operation.

The second “TS” paragraph, the last in the document, ends with the phrase "signal intelligence will undoubtedly play a significant role in keeping our negotiators as well informed as possible throughout the 2-week event."

Simply put, this means the NSA would try to continue spying on other nations as the conference got underway.

Information quotes one unnamed Danish official as saying the spying may have given the US a “huge advantage” going into the conference.  But it’s impossible to know how or if they put that advantage to work. There were high hopes beforehand for a breakthrough treaty, but the reality was that a significant agreement was always unlikely, and ultimately that’s where things ended up, without any big breakthroughs.

But consider this: the two-week meeting was only salvaged by a modest last-minute agreement between the US, China, and a handful of other countries, which only came about when president Obama became uninvited to a private meeting between China and those other countries.

How the US learned about that meeting has always been unclear. Now we know it's possible the NSA spying may have tipped them off. If that's the case, then the spying operation may well have affected the outcome.

Of course Copenhagen is water under the bridge. What’s important in the seemingly unending UN climate negotiations is addressing the huge challenges still ahead. And as with the other Snowden revelations of spying on America’s foes and friends alike, this one will only make that more difficult.

Countries generally assume that they’re all spying on each other, but they want to be able to say, they’re not. In this case the US can no longer say that, and that will make it even harder for the US to gain the trust of other countries in what are already perhaps the most difficult negotiations ever.