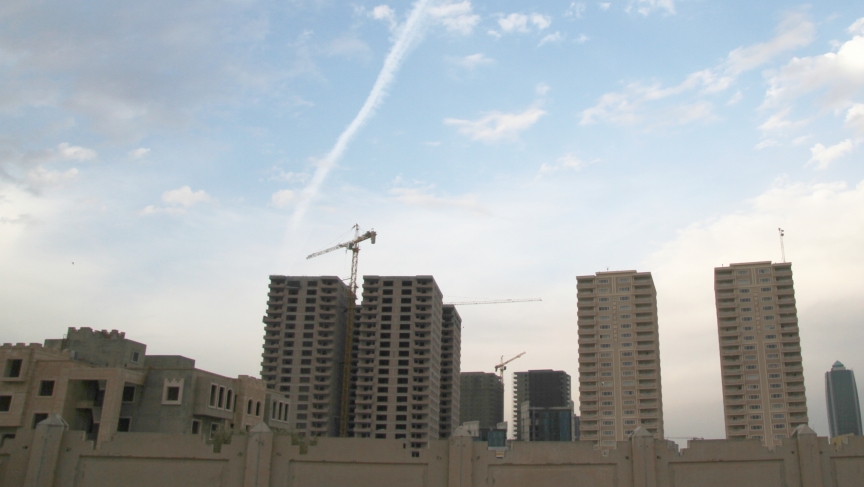 The city of Erbil, in the area of northern Iraq known as Kurdistan, is booming.

Sitting on some of the world's largest untapped oil and natural gas reserves, the region is experiencing a surge in investment and construction. Five-star hotels are dotting the skyline and luxury condo complexes with names like "American village" are opening on the outskirts of the city.

As oil companies set up shop in Iraq's semi-autonomous Kurdistan region, they're bringing in lots of money and creating new demand for things like conference centers, translators, restaurants and coffee shops. This new demand, combined with liberal investment laws, is opening up the economy in a part of the world where business was once reserved for people with family or political connections.

Valley Edwar is a university student in Erbil studying business. On the side he runs his own business. He's neatly dressed with a tucked in, button-down shirt, his ID in a lanyard around his neck and his breast pocket is full of business cards.

"All you need to start your own business here is an idea. You don't need much more than that. When I started, all I had was $200 in my pocket," he boasted in between meetings and classes.

To hear young Kurdish entrepreneurs talk about it, Erbil sounds like some Middle Eastern Wild West frontier town. Edwar, who’s just 25, won his first deal three years ago. It was a contract for the Spanish embassy. They had meetings in Erbil and needed someone to help with logistics: arrange meeting rooms, transportation and provide translators.

Edwar said for that first job, he just rounded up a few friends to do the translating and booked the meeting rooms himself. "They obviously liked the job and they were quite happy about it. Then I thought, 'maybe I should take it one step forward,'" he recalled.

So he did. And he said his company now employs about 200 people and is worth around $600,000. His employees work for multinational oil companies, investors and consulates. With violence on the rise in the Iraqi capital of Baghdad, even companies who work in other parts of Iraq are setting up shop in Erbil.

But Todd Moss, with the Center for Global Development, warned that Kurdish officials need to be careful, because natural resource booms can be fleeting if not properly managed.

"In many countries the influx of capital from a natural resource windfall, like natural gas or oil, presents a couple of problems," he cautioned.

"One big problem is that this flood of cash needs to be turned into other things, into infrastructure, public services and other kinds of industry and jobs for the population. That’s actually quite a difficult task. It’s not as easy as it seems."

For one thing, Moss said, all this new cash usually goes through the government and governments don't always make the wisest spending decisions. But so far in Kurdistan, the government does seem to be building a broad-based economy. Foreign investment now stands at more than 32 billion dollars and construction is constant.

Anwar Anaid, a professor of economics at the University of Kurdistan, tells a story you hear a lot in Erbil. He's lived here for year and he drives to work every morning, "and sometimes I have second thoughts about whether I'm going the right way" he laughed, shaking his head. "That shows the speed that the high-rise buildings are going up."

As the geography of Erbil transforms, all the business and the opportunity it creates is also shifting the city's social fabric.

"You might find it strange, but my parents never did this kind of business," Edwar, the young entrepreneur, said. He doesn't come from a long line of business owners, or a family with government connections. His parents were both teachers.

"They would say, 'why don’t you take your degree and graduate and have a peaceful life, maybe teaching,'" he said with a smile.

Edwar's story would have been unthinkable just a few years ago and it still is in most of Iraq, but he said that now most of the students in his business classes are like him; breaking from the jobs and lives their fathers and grandfathers held to pursue a dream — and make a deal.