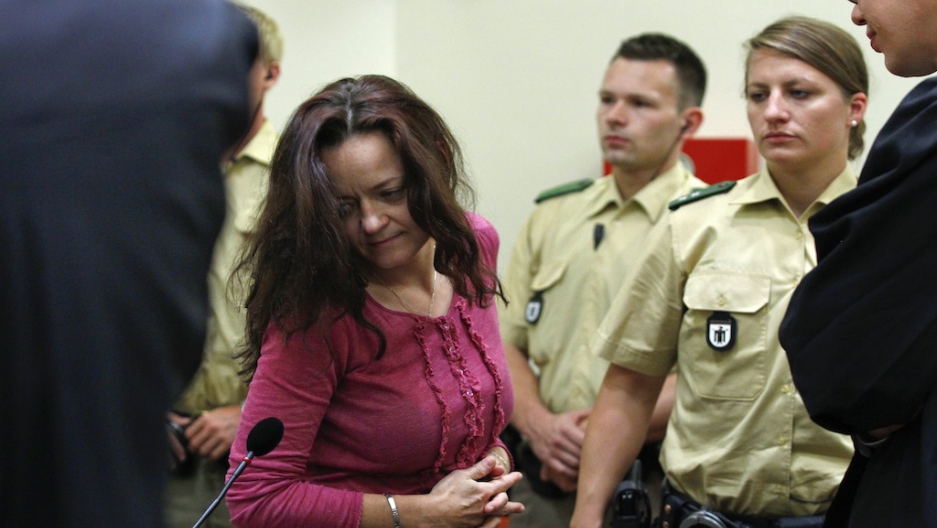 Defendant Beate Zschaepe arrives for her trial in a courtroom in Munich, on August 6, 2013. The trial negotiates against a previously unknown neo-Nazi cell, the National Socialist Underground (NSU), which is accused of murdering nine Turkish and Greek immigrants and a policewoman from 2000 to 2007. The focus of the trial is 38-year-old woman, Zschaepe, who is accused of being an NSU founder member and faces charges of complicity in the murders, two bombings in Cologne and 15 bank robberies. Four suspected male accomplices are also on trial. The existence of the NSU emerged in November 2011 after Uwe Boehnhardt and Uwe Mundlos of the NSU were found dead in a burnt-out mobile home and the third Zschaepe, gave herself in to police.
Credit: AFP
Share

MUNICH —The prosecution of five members and associates of the National Socialist Underground (NSU), now at its midpoint in a courtroom here, is one of Germany’s longest and most historic trials.

Despite the trappings of an ordinary legal proceeding, the crimes for which it has been convened are anything but ordinary. The five defendants are accused of a decade-long spree of bombings, bank robberies, and murder of a police officer and nine others of Greek and Turkish origins.

The case is a brutal reminder of the tumor of hate that metastasized here more than 70 years ago and still lingers in parts of the German social fabric.

The NSU’s mere existence as a right-wing terrorist group and the years it took to uncover it has been cause for reflection and collective soul searching. Least of all, it is a major embarrassment for a country that strives to confront and overcome its Nazi past.

The principal defendant is Beate Zschäpe. With two of her cohorts dead since 2011 (apparently from suicide), she is left to account for their alleged crimes. As such, she has become not only the face of the case but of the ongoing threat of far-right and racially motivated violence in Germany.
While Zschäpe has been a familiar figure in the German news media, seeing her in the flesh was a surreal experience. As she sat in the courtroom, she seemed young and affable, somebody’s neighbor, somebody’s daughter. She laughed and chatted amiably with her lawyers as if nothing was amiss, as if the country’s eyes weren’t locked on her as she answers to multiple counts of cold-blooded killing, as if she weren’t the neo-Nazi all signs suggest she is.

Zschäpe and her co-defendants showed little interest in the proceedings that will determine their fates. An onslaught of questions—from the chief judge, the state prosecution, the defense team and a slew of lawyers representing victims and their families—bore down on a single witness, Alexander S. (under German law, witnesses’ full names are barred from publication) who is not suspected of direct involvement in the crimes.

He didn’t seem eager to help. Slouching in the witness chair in jeans and a hoodie, Alexander S. stayed cool and slippery. His answers portrayed a witness who knew just enough to not know anything at all.

As the lawyers pressed him on whom he knew, what he knew and when, his responses revealed little: ‘’I can’t recall,’’ ‘’Not that I’m aware of,’’ ‘’I have no memory of that.’’ The tension in the room was palpable.

How a country responds to terrorism, existential threats and, above all, the shameful chapters of its own history tests the maturity of its democracy and civil society. This holds particularly true for Germany, the birthplace of ruthless National Socialism and contemporary anti-Semitism balanced against a rule of law and rational discourse that has deep roots in German history.

In the democratic culture of modern Germany, many were shocked to discover that the remnants of the Nazi era persisted in such a virulent form.

The past and present of German culture are present in this Munich courtroom where the NSU trial represents the far larger struggle between democratic modernity and misguided right-wing nostalgia.

Germany can be proud that its response to racist madness is the measured order of a court trial. For the 10 innocent victims, the trial after-the-fact is hardly grounds for self-congratulation.

Instead, it should provoke a serious reassessment of the terrorism that targets immigrants and visible minorities in societies that should be free, open and safe for all. Trials to prosecute racist murders can’t be the only way to keep fear and intolerance at bay. By then, it’s already too late.

Bill Glucroft is the director of Development and Strategic Partnerships for the Amadeu Antonio Stiftung, a German foundation that promotes democratic civil society and works against right-wing extremism in Germany.