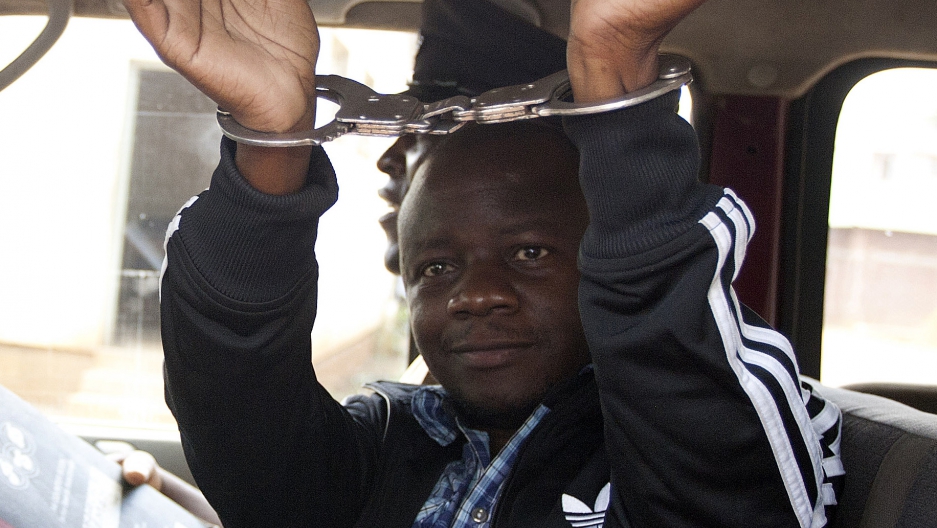 Pika Manondo, one of the suspects implicated in the shooting of Malawi's Budget Director, waves his handcuffed hands as he leaves the Lilongwe Chief Resident Magistrate Court in a police vehicle, on November 11, 2013.
Credit: Amos Gumulira
Share

NAIROBI, Kenya — Malawi is in the throes of its biggest-ever corruption scandal, dubbed “Cashgate” by the local press. Corrupt officials are accused of stealing government funds and building luxury homes with money intended to improve the lives of some of Africa’s poorest people. So what’s it all about and why does it matter?

Cashgate is Malawi’s biggest corruption scandal and has cost the cash-strapped country an estimated $100 million. The scam involved fraudulent government payments for services not rendered and for “ghost pensions” to fictional government retirees. Corrupt officials pocketed the money, using it to buy smart cars and mansions — or simply stuffed bundles of US dollars and Malawi kwacha in car boots, handbags and pillowcases, hence the “cash” in “Cashgate”: Unlike the corruption scandals many Americans may be familiar with, the piles of money in Cashgate are more than merely figurative.

Sixty-eight people have been charged so far, among them ex-ministers, ruling party bigwigs, civil servants and businessmen. Charges include theft, fraud, money laundering and attempted murder. Property and vehicles have been seized and dozens of bank accounts frozen.

How was Cashgate uncovered?

Cashgate burst open in September last year when Paul Mphwiyo, a senior Finance Ministry official, was shot three times — in the head — by gunmen outside his house in the posh Area 43 district of the capital Lilongwe. Incredibly, he survived. Mphwiyo had worked during the prior two months as budget director for the Finance Ministry, tasked with closing a number of loopholes in the country’s financial system that were leading to fraud and waste.

The assassination attempt came less than a week after a junior Environment Ministry official was found with over $250,000 in his car trunk. The two incidents blew the lid off a cartel of corrupt officials and the rotten heart of President Joyce Banda’s government. Banda, who took office in 2012 following the death of her predecessor Bingu wa Mutharika, responded to the incidents by first firing then reappointing most of her cabinet, leaving out Finance Minister Ken Lipenga and Justice Minister Ralph Kasambara. Kasambala has been charged with the attempted murder of Mphwiyo, while Lipenga professes ignorance of the scandal. The story is that Kasambala targeted Mphwiyo to keep him from exposing the corrupt officials. Whether or not that’s the whole story remains to be seen.

What’s at stake for Malawi?

Already infamous for grand corruption, Malawi doesn’t have much of a reputation to damage at this point. But this is not the case for Banda, 63, who was lauded by regional and foreign leaders as representing a fresh start for the country, a woman who, like Liberia’s Ellen Johnson-Sirleaf, would put an end to the years of bad rule by bad men. More importantly, the impact of Cashgate will quickly be felt by Malawi’s 13 million citizens and especially by the rural poor and impoverished city-dwellers. Malawi, an exporter of low-grade tobacco and little else, can barely feed itself, and cannot afford a penny to be lost or stolen without dire impacts on the most basic services like schooling and health care.

What’s at stake for foreign donors?

It looks bad for the World Bank, which, in 2005, imposed on Malawi a new electronic accounting system known as Integrated Financial Management Information System (IFMIS). It was supposed to make the country’s finances more secure. Instead, the new system has been subverted by corrupt officials to enable the siphoning off of vast sums of government money. And because donors provide 40 percent of the country’s annual budget, they are not happy. Major donors, including Britain and the European Union, have suspended $150 million worth of aid while the investigation and trial plays out. EU Ambassador Alexander Baum told the BBC donors were suffering “a crisis of confidence” in Malawi.

The trial began on Jan. 30 and was promptly adjourned. Britain and the EU are completing a forensic audit that could lead to further arrests as well as a clearer picture of how Cashgate was carried out. All may not be lost economically: In mid-January the International Monetary Fund (IMF) released $20 million in suspended aid, signaling an improvement in relations with dismayed donors. But with national elections due in May, the timing could not be worse for Banda and her ruling People’s Party.