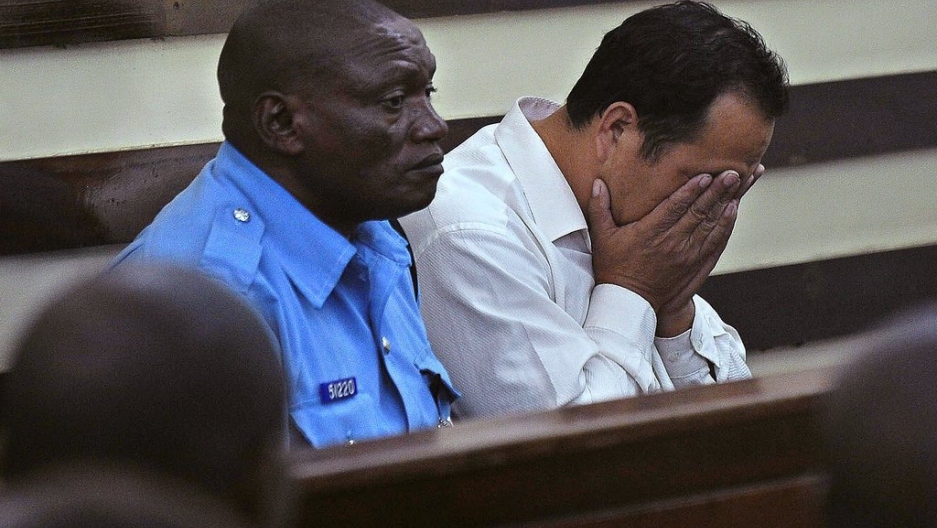 Tang Yong Jian (R), 40, a Chinese national, buries his face in his palms after he was arraigned in a Nairobi court January 27, 2014 for trying to smuggle 3.4 kg of raw elephant ivory through Kenya on transit to Guangzhou, China from Mozambique.
Credit: Tony Karumba
Share

NAIROBI, Kenya — Kenya’s leading legal rights group Thursday called on Kenya’s government to pressure the United Nations to adopt “justice” as one of its primary global development goals beginning next year through 2030.

Declaring Jan. 30 “Access to Justice Day,” Kituo Cha Sheria  (the Center for Legal Empowerment) engaged Kenyans in a televised conference to rally the nation toward what it says is much-needed judicial reform here and around the world.

“A large population of the poor and marginalized are living outside the protection of the law,” wrote the group in a letter urging Kenya’s UN representatives to introduce justice as a new development goal during next week’s meeting the UN’s Open Working Group (OWG) on Sustainable Development Goals.

The original Millennium Development Declaration passed the UN General Assembly unanimously in 2000. All 189 UN member states at the time pledged to work toward specific targets in eradicating extreme poverty and hunger, reducing child mortality and six other lofty goals.

But missing from those goals was any mention of legal rights or justice.

“Justice targets were left out because it was argued that they could not be measured,” according to Kituo Cha Sheria. “Some did not see justice as central to development. We now know this is not the case.”

Kenyans today find themselves at a pivotal moment in that regard: In 2010 they ratified a new constitution that guarantees broad legal rights for all citizens to be treated equally under the law. But making that decree into reality is another matter entirely.

“We have a justice system that has classified everyone as equal—but we know well that we are not all equal. If you have no money you can go to jail for the same crime that another person will walk free from,” said vice chair of the Parliament Committee on Legal Affairs Priscilla Nyokabi.

Many eyes were on Kenya to see if judicial prosecutions would follow the outpouring of violence during the 2007-2008 elections for which the nation’s standing president, Uhuru Kenyatta, is now accused by the prosecutor of the International Criminal Court of committing crimes against humanity.

“To the extent that we had a very successful election last year, we are happy to be setting an example now for the rest of east Africa too, especially South Sudan with its new government,” said Nyokabi.

Legal rights advocates at the conference applauded the appointment of a what they call a “reform-minded” Chief Justice of Kenya, Willy Mutunga who himself helped found Kituo Cha Sheria. And many say the slowly increasing number of women in government positions is cause for optimism when it comes to women’s empowerment before the law.

Women in Kenya unique hurdles because Kenya’s traditional patriarchal traditions dictate assets including homes and land be handed down through men, leaving wives and particularly daughters without any inheritance.

“The only way to make a point to their fathers is really through the law,” said Nyokabi. “Because if you are landless in this country, you are powerless.”

Obtaining even basic legal documents such as land titles in Kenya can be so cumbersome that private lawyers must be involved. Because representation is costly, justice essentially becomes cost-prohibitive for the majority of Kenyans, advocates say.

Access to the courts is particularly scarce in rural parts of Kenya—a problem Kenya’s government is attempting to correct by creating ‘mobile courts’ with magistrates who travel from town to town for proceedings.

But those in Kenya with the fewest legal rights of all, say advocates, are the refugees. Kenyan police routinely abuse Somali immigrants, arresting them without charge and releasing them only after they or their family pay a bribe.

Today, Kenya ranks as only “partly free on the scale maintained for all countries by Freedom House International, which in 2012 named Kenya a “country in transition” largely due to its new constitution that attempts to combat “a long record” of “favoritism in land allocation.”

That report continued that “Numerous (governmental) scandals have arisen in recent years, and more continue to come to light through investigative reporting by Kenyan media.” But would-be muckrakers among the Kenyan press suddenly found themselves at risk after Kenya’s Parliament passed a law in December that strips away press freedom by granting the government unchecked power to issue extremely large fines to journalists who produce unflattering reports.