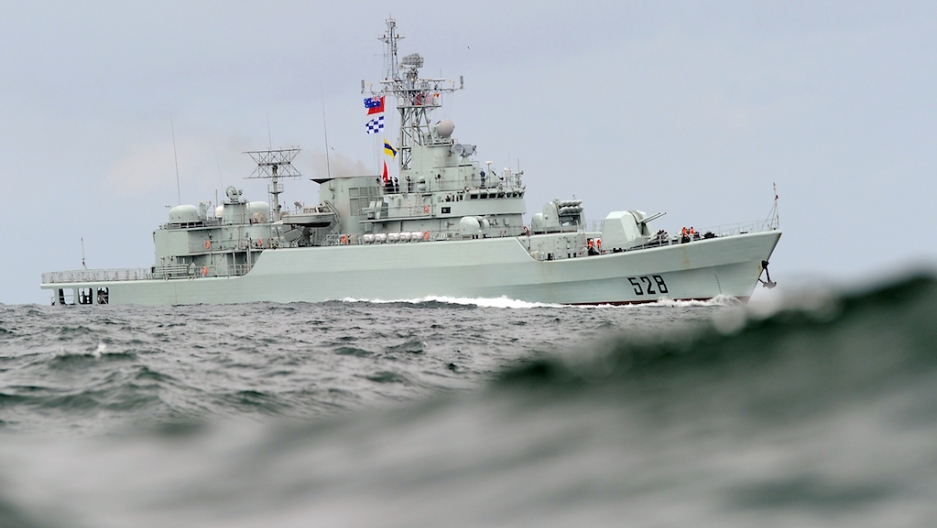 HONG KONG — As anyone who has seen “Rebel Without a Cause” knows, playing chicken is dangerous for California teenagers in hot-rods.

But playing chicken with warships, cruisers, and fighter jets — well, that’s just another level of crazy.

Unfortunately, vessels from the US military and from other countries increasingly find themselves in such high-stakes confrontations on the East Asian seas, where China has adopted a strategy of making rivals flinch or risk collision.

Just this week, Chinese sailors parked three ships on a disputed reef 50 miles from the Malaysian coast and performed a ceremony in which they swore an oath “to safeguard [China’s] sovereignty and territorial interests.” Malaysia also claims the reef, and is building a naval base nearby to protect it against China’s claim.

That’s just the latest in an escalating series of incidents.

In November, China declared its right to patrol and regulate a large swath of airspace, including a zone controlled by Japan and areas regularly used by the US military. Since then, China says it has repeatedly dispatched surveillance planes to tail, monitor, and identify foreign fighters.

In December, a Chinese ship halted in the path of the USS Cowpens, in international waters, forcing it to change course or risk a crash. The American cruiser complied.

Then in January, China’s southernmost province of Hainan announced that police vessels had begun enforcing a law requiring “all foreigners or foreign ships” to get approval before they could fish in 2 million square kilometers of sea — an area five times the size of California. The claimed territory encompasses waters long plied by fisherman from Vietnam and the Philippines.

While none of those incidents has yet led to bloodshed or to any formal cession of territory, they have yielded de-facto results. And collectively, they show the genius and risks in China’s plan to wrest control of the South China Sea, one provocation at a time.

“China's strategy works best against weak states who do not have the means to respond. [And] it presents an asymmetric challenge to the US because if the US Navy uses warships it will be seen as escalating the dispute.”

The strategy has already reaped dividends.

Since a 2012 showdown between Beijing and Manila, armed Chinese ships have successfully occupied a reef 125 miles off the coast of the Philippines, blocking access to Filipino ships and confronting boats that approach the shoal. The occupation of this reef, which lies more than 500 miles from the nearest Chinese province, has become a textbook example to Chinese strategists looking to expand China’s reach.

To understand the strategy’s longterm goal, look at the map below. It shows the so-called “Nine Dash Line” or “Cow Tongue” that appears on all Chinese maps, outlining the extent of Beijing’s maritime claims. In all, the Cow Tongue covers 80 percent of the South China Sea.

Although the Pacific contest may seem remote to Americans, the stakes are high.

A large portion of global trade passes through international waters claimed by China, and the US has five treaty allies with interests in the region — Thailand, South Korea, Japan, the Philippines and Australia.

What can the US do?

Short of a military confrontation, the options are limited, particularly when it comes to cooling down the confrontation between Japan and China.

“It’s tragic and it is difficult to see how both sides can back down while saving face,” says Victor Teo, expert on Sino-Japanese relations at the University of Hong Kong.

That’s perhaps why some US strategists recently called for the American military to, in effect, stop being the first to flinch when provoked by Chinese vessels.

In a recent article for Foreign Affairs, Elbridge Colby and Ely Ratner of the Center for a New American Security argued that the US should raise the stakes for China, putting the onus on them to be the peacemaker who backs down.

“China is taking advantage of Washington’s risk aversion by rocking the boat,” the authors write, “seeing what it can extract in the process and letting the United States worry about righting it.”