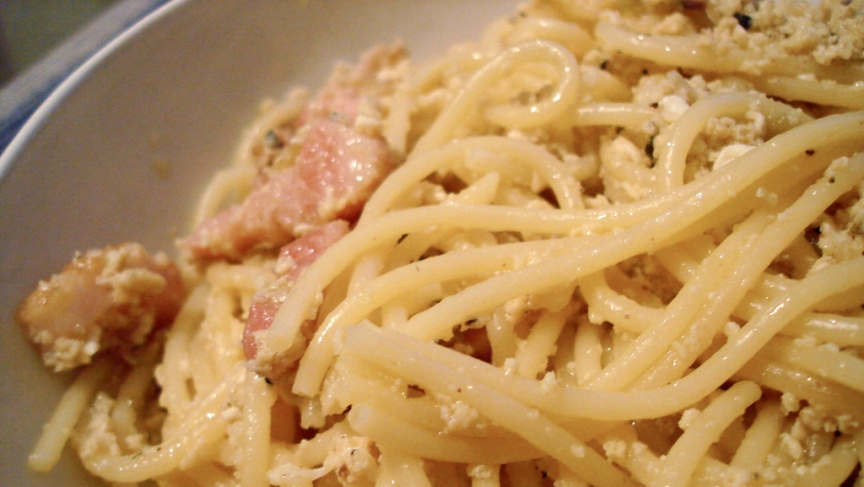 Maureen Fant is a writer and food historian, based in New York and Rome (she lives over the road from the Colosseum). And she’s got strong feelings about some of the time-honored pasta dishes of Rome.

Take spaghetti alla carbonara, the classic preparation with only egg, cheese, and pork added to al dente spaghetti. It was a dish Fant first tried in the mid-1960s, when she was studying abroad in Rome.

She experienced spaghetti alla carbonara as a kind of midnight snack food—something you could pick up for a few lira at the neighborhood Trattoria. And then she came home to New York.

“The first time I ever cooked spaghetti alla carbonara on my own was in [New York] in 1968," she says. "And nobody I knew in New York had ever heard of it. In 1968, all sauces were red. And in fact the guest that evening later told me that he had been embarrassed for me, because he thought I’d forgotten the spaghetti sauce.”

Things have changed since then. So much so, says Fant, that “everybody feels like they own carbonara; people feel free to vary it as they please.”

But Fant insists that, while carbonara is a “fantastic base” for culinary experimentation, for a dish to be named carbonara it must consist solely of those four ingredients: pork (preferably guanciale - the pig’s cheek), cheese, egg, and spaghetti.

“You stop calling it carbonara the moment you add something [else],” says Fant.

Fant is not being persnickety. Carbonara, she continues, is a shepherd’s dish.

In the regions surrounding Rome, shepherds developed dishes such as carbonara because they were easy to make on the move. You could carry “a hunk of pork, a piece of cheese ... grab an egg from a passing hen,” and—so long as you could boil water for the spaghetti, you’d be all set.

“There is something about these really, really traditional dishes that is worth remembering," she says. "I don’t want to compare spaghetti alla carbonara to the Colosseum—it seems silly. But this kind of food represents social history. It’s the history of a people, and when it all gets mixed up we forget who these people are, and who they were, and how they started, and all the hard work they did.

“And so I think that’s worth hanging onto.”

Here's a link to Sauces and Shapes: Pasta the Italian Way, by Maureen Fant and Oretta Zanini de Vita.

Here's an authentic recipe for spaghetti alla carbonara from the blog Cook and Eat Better.