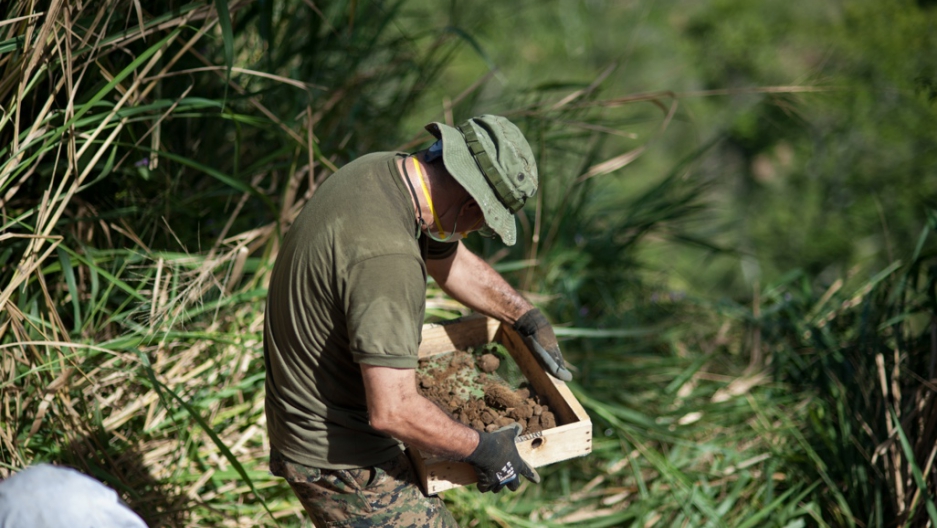 SAN SALVADOR, El Salvador — In a room set apart from the scrubbed surfaces and autopsy tables of this city’s medical examiner’s office, two technicians in white coveralls are sifting through sacks of mud and death.

One technician carefully extracts a human vertebra. He brushes off the bone with what looks like a toothbrush, and then places the bone into a water basin.

The technicians “leave nothing untouched,” says Saul Quijada, the forensic anthropologist in charge. “Even the smallest item can be important.”

The sacks were trucked in from a mass grave discovered last December in the fields of Lourdes, a working-class district on this city’s outskirts. Authorities accuse the Barrio 18 street gang of digging the burial site in the remote and rugged fields to hide the remains of 44 people who’d been killed and dismembered elsewhere.

A March 2012 truce between Barrio 18 and its powerful rival, the Mara Salvatrucha, or MS-13, has been credited with slashing El Salvador’s homicides from more than 4,000 in 2011 to about 2,500 over the past two years.

But the discovery of the mass grave — the largest found since this country's 12-year civil war — has given ammunition to truce skeptics. They’ve noted that while murders were supposedly declining, disappearances were rising, to more than 1,000 last year. Crimes and killings, critics say, continued clandestinely all along.

And with only days to go before El Salvador’s presidential election on Sunday, politicians have seized on the truce as a potent wedge issue in a nation terrorized by violence.

“All these people were murdered during the so-called truce,” says Miguel Fortin Magana, director of the medical examiner’s office in San Salvador.

And these gang issues matter well beyond Salvadoran borders.

Both Barrio 18 and MS-13 formed in Latino migrant communities in Southern California. Mass deportations by the United States pushed them into Central America in the 1990s. The "maras," as the gangs are called, found fertile ground in postwar El Salvador, where displaced and broken families crowded into cities, making for easy recruiting, and where police were ill equipped to handle the spike in crime.

The gangs spread to neighboring Honduras and Guatemala, and their foot soldiers now number in the tens of thousands — helping make this the world's most violent region outside a war zone.

Offshoots of the maras continue to thrive in immigrant enclaves of the US and Canada, but with gang leaders giving the orders from squalid tropical prisons.

El Salvador’s gang truce was an unorthodox response to years of hard-line policies that failed to stem the bloodshed. Gang leaders, a bishop, a human rights activist and — from a careful distance — government officials brokered the cease-fire in secret negotiations. The agreement allowed key gang leaders to be moved to lower security prisons.

The government has never acknowledged an active role, and outgoing President Mauricio Funes continues to deny that it took part, even after a recent leak of audiotapes made it clear that negotiators had the backing of Funes' top security official at that time.

Gang leaders, who met recently for the first time in seven months, claim that the truce remains in place. But murders have risen sharply in recent weeks, with about eight killings daily and a surprising number of massacres. Neighborhood walls that had been symbolically scrubbed of gang graffiti at the truce’s onset are now littered with tags.

In a recent poll conducted by the University Institute of Public Opinion at the Central American University in San Salvador, nearly 70 percent of respondents said they had little or no confidence in the truce.

“What has been consistent over the last year and a half is the rejection of [the truce] by the public,” says Jeannette Aguilar, the institute’s director.

The truce has become the central campaign issue of the conservative opposition, the Nationalist Republican Alliance (ARENA). Its presidential candidate, Norman Quijano, has said the government made a “pact with criminals.”

In solemn television ads, Quijano claims he's the only candidate able to defeat the gangs. “I know what has to be done, and you do too,” he deadpans, without saying what that is.

Salvador Sanchez Ceren, the candidate for the governing left-wing Farabundo Marti National Liberation Front (FMLN), has been vague about whether he supports the truce, though he was vice president when the negotiations took place. In debates he’s been loath to even mention it, and when pressed denies his government’s involvement.

Steven Dudley, co-director of InSight Crime, a website that tracks organized crime in the Americas, says the FMLN’s vacillating and lack of transparency on the truce has hurt the process and made it difficult for other organizations, such as churches and NGOs, to provide the support needed for the truce to succeed.

“Own it or don’t,” he said of the ruling party’s stance. “This game they have played has been very counterproductive.”

Little is known about the gangs themselves, which are estimated to have about 60,000 members in El Salvador and are often portrayed as “a massive and faceless enemy,” Dudley says. The truce, he said, served as a rare opportunity to understand “who these guys are and how much reach they have,” and to engage them in ongoing conversations.

“By mishandling this," he says, the Salvadoran government "could shut the doors for a very long time.”

San Salvador’s medical examiners have so far processed the remains of 25 people from the mass grave in Lourdes. Of the six bodies identified, Dr. Fortin says, not all were gang members. A fruit vendor from the area was among them.

What’s more, authorities know of two other suspected mass graves. One, Fortin says, lies within the district of Soyapango, an area where gang territories are fought over constantly, and the other is in the heart of San Salvador’s downtown.

In the medical examiner’s office, the violence that gangs can unleash appears in stark relief.

In one room, the skeletal remains of three people are laid out on long tables.

Quijada, the forensic anthropologist, fits together three neck vertebrae and points out sharp irregular angles on the uppermost one. The splintering, he explains, most likely occurred as the person was hacked at with a machete.

Investigators are leaving 19 bodies in the ground at Lourdes until they can start excavating again next month. Completing work on this mass grave “could take us until the middle of the year,” Quijada says.

“That's if there are not others, and it appears there are.”