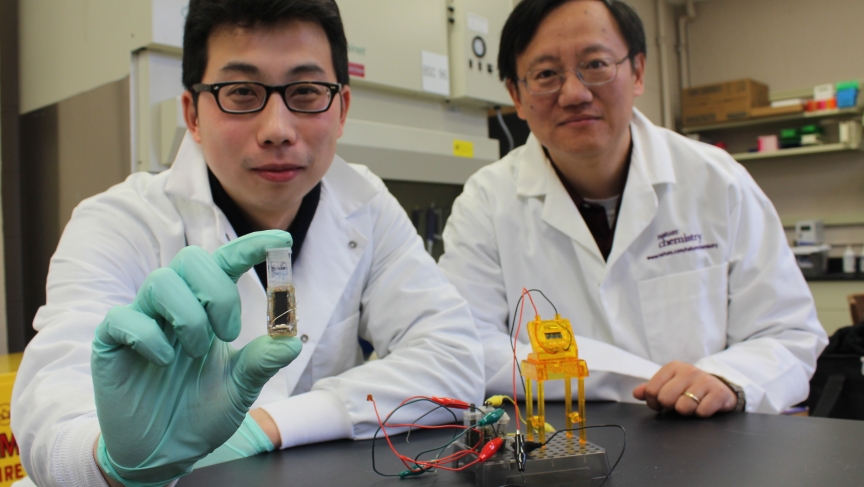 Gadgets power our lives these days.

Just take Tuesday night’s State of the Union where thousands of journalists tweeted their reactions from smartphones across the world.

Others watched it on tablet computers.

All those devices run on batteries, many of which are toxic, and not especially efficient.

But what if you could make a battery that’s way more efficient and biodegradable?

That's the question a team at Virginia Tech University, led by a Chinese-born scientist, Y.H. Percival Zhang, is trying to answer.

What's a bit of a surprise, is the energy source his team’s working with.

“The key idea of this sugar battery is to try and extract all the energy out of the sugar and convert it to electricity,” says Zhang.

Catch that? Zhang’s power source for what he says is a breakthrough bio-battery is sugar.

That’s right, he’s setting up the public health villain as a clean energy hero. Zhang says his biodegradable battery could replace millions of small batteries made from toxic or environmentally dicey substances. And he says it could last at least 10 times longer than current lithium-ion batteries.

The sugar Zhang’s battery runs on is maltodextrin, something you may have seen on an ingredients list on a food label.

It’s basically made by cooking down starch. His battery uses enzymes as a catalyst to strip electrons from the maltodextrin and create a current.

It’s really a rechargeable fuel cell more than a typical battery, but one that runs on super-ordinary stuff.

Zhang’s team published a report on their research in the latest issue of the journal, Nature Communications.

It isn’t entirely a new line of research. Work on sugar-powered batteries has been going on for at least 20 years. And Zhang himself has been on the case for a while.

“We've been working on this battery for five years already,” he says.

What makes Zhang's battery unique is its efficiency—it squeezes way more energy out of the sugar.

“We are the first to one that can extract all the energy in sugar and convert it into electricity,” he says.

Zhang says his invention is also an order of magnitude more powerful than previous sugar batteries. And he hopes it will be ready in just three years.

Of course not everyone is so optimistic.

Vince Battaglia, of the Lawrence Berkeley National Laboratory in California, has spent a large part of his career working on energy storage. He agrees that sugar has a lot of potential. He says it’s nearly as dense an energy source as gasoline.

That’s because, as Zhang acknowledges, it’s a fuel cell rather than a traditional battery. So there are still plenty of nagging details to be worked out before it could be practical.

Zhang says he recognizes the challenges. And he says scientists would also have to solve at least two more big ones before something like this could be ready for larger scale application: improve the lifetime of the battery. And increase its power.

Still, he believes in its potential for low-power devices.

“We believe in the future this battery will be used to power portable electronics like an iPhone, iPad, (or) Kindle,” he says.

A pipe dream? Perhaps. Such predictions about sugar-powered batteries have been made for years.

But as anyone who’s reached for a doughnut today can attest, sugar has an undeniable power.