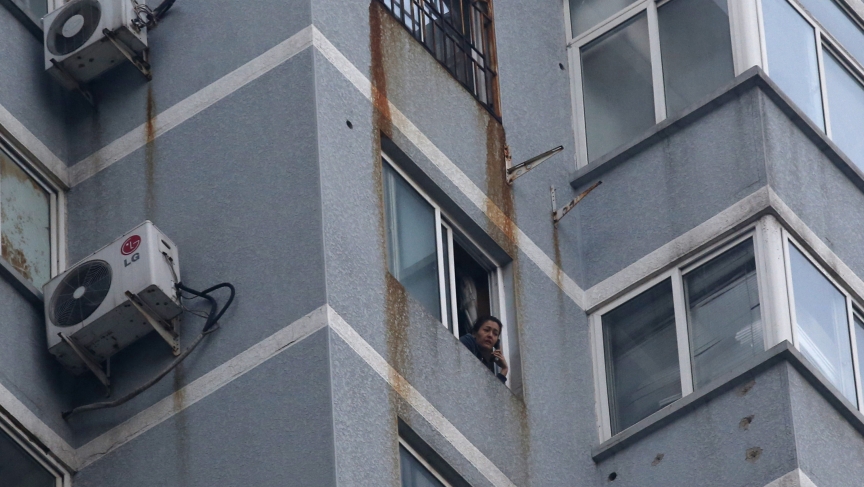 Guzailai Nu'er, the wife of Ilham Tohti, looks out the window of her house in Beijing as she does an interview over the phone with Reuters on January 17, 2014. Nu'er has been prevented from leaving by Chinese police.

The Chinese government has arrested a prominent economist and outspoken advocate for the Uighur ethnic minority of western China.

Police say he's guilty of spreading ethnic hatred and separatist ideas. Another group of Chinese anti-corruption activists calling themselves the "New Citizens Movement" has become the target of a government crackdown, with three of its members being sentenced to jail terms of up to four years. The State Department says there is "a disturbing pattern of arrests and detentions" happening in China.

Ilham Tohti, a professor at Minzu University in Beijing, was arrested in the Chinese capital on January 15. According to his wife, Guzaili Nu'er, police detained Tohti during a raid on the family's home when they also seized computers, phones, credit cards and documents. Since then, officers have prevented Nu'er from leaving the building for any reason other than bringing her children to and from school, she told the Reuters news agency.

A spokesman for the Chinese government said that Tohti is suspected of "breaking the law." Police in Xinjiang say Tohti is guilty of using his university classes to advocate violent protests among Uighurs.

"What the police said about my husband is rubbish. He isn't that kind of man," Nu'er told The Wall Street Journal. "He has never said anything to incite ethnic hatred, and he has never had any connection to separatist groups. He's a university professor."

The Uighurs are a mostly Muslim minority concentrated in China's far western region of Xinjiang. They speak a language related to Turkish. In recent years, violence has flared up in Xinjiang between local Uighurs and Chinese security forces, along with ethnic Han Chinese migrants.

Professor Tohti has probably become "the most influential, independent voice from the Uighur community," says Ananth Krishnan. He's the Beijing correspondent for the Indian newspaper The Hindu, and has written about Tohti. Krishnan says many people he interviewed during his three trips to Xinjiang were familiar with Tohti's writings.

"He has written extensively, often critically, of the economic development model in Xinjiang," Krishnan says. Some of the professor's writings appeared on a website he helped establish, called Uighur Biz.

His arrest most likely didn't come as a surprise. Tohti knew he was pushing the limits of expression in China, Krishnan says.

"I think he was aware," Krishnan says. "He thought it was imminent, actually, that he could face arrest and detention at any point."

This wasn't the first time Tohti had a run-in with Chinese authorities. But the latest allegations from police suggest Tohti could end up being sent to prison.

In a separate case, prominent Chinese legal activist Xu Zhiyong was sentenced on Sunday to four years in jail for "gathering crowds to disturb public order." Xu was one of the leaders of a group called the New Citizens Movement. Two other members were sentenced on Wednesday to 18-month prison terms.

Xu's group rallied around the very same issue that China's own president says tops the government's agenda: fighting official corruption. "The movement that began [in 2012] as informal gatherings," says Ananth Krishnan, "soon took to the streets.

"You had activists who were posing with banners in various cities in China, calling on officials to declare their assets," he says.

Krishnan says Chinese President Xi Jinping is probably serious about cracking down on corruption, but that the party will only do so on its own terms.

"It can't tolerate a civil society movement that is attempting to mobilize public opinion," Krishnan adds. "As far as the Communist Party is concerned, this is going to lead to very dangerous ground."