Diabetes is on the rise in Cambodia, and in many ways that's not a surprise. The population is aging, people have more to eat and they are doing less physical labor. These are known risk factors for type 2 diabetes, also called adult-onset diabetes.

But something else may be contributing to Cambodia’s increasing cases of diabetes.

From 1975 to 1979, the country was ruled by the Khmer Rouge, which systematically killed many of its own people. Estimates vary widely — from 700,000 to 2 million or more people were either killed or died of starvation. 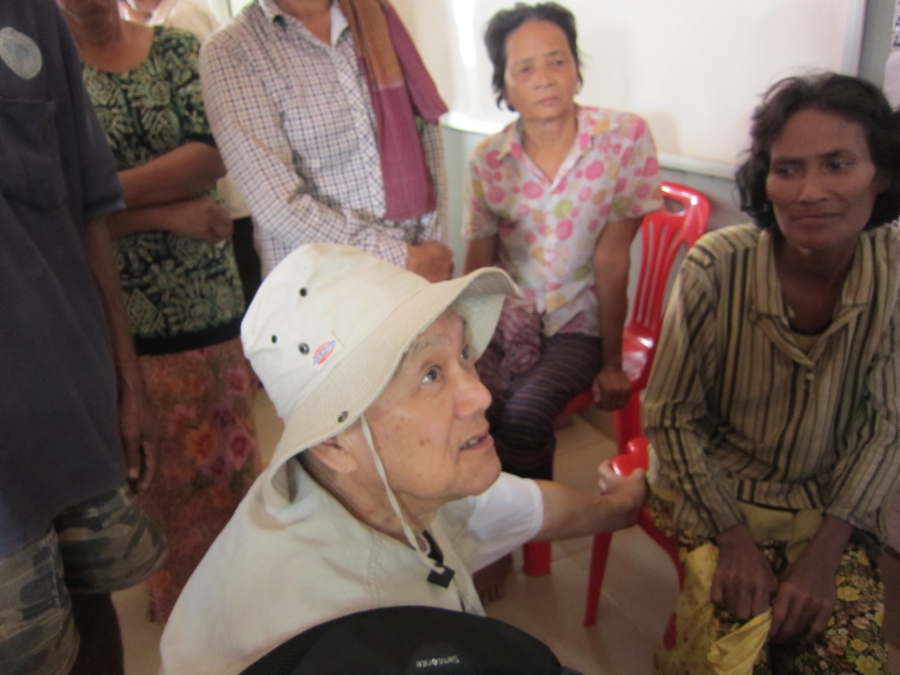 Endocrinologist Lim Keuky talks to a woman who has come in for a diabetes checkup.

Today, endocrinologist Lim Keuky, head of the Cambodia Diabetes Association, sees what he believes is a result of the Khmer Rouge’s brutal regime at a clinic in a rural village near Angkor Wat. It is crowded with diabetes patients in their late 30s — an early age for the disease to set in.

“You can go to every village with me and see it,” he says. “When I go abroad to developed countries, people say I’m lying. I’m not lying.”

Keuky suspects that what he's seeing is a product of those years of starvation.

Researchers in the Netherlands have noticed a similar phenomenon. They have been studying survivors of the “Hunger Winter,” a dark episode during the Nazi occupation of World War II.

In the winter of 1944-1945, the Nazis had blocked all food coming into the western part of the Netherlands. “From the moment the embargo and winter set in, food went out,” says Dr. Rebecca Painter of the Academic Medical Center in Amsterdam. “People were getting less than 1,000 calories a day.”

Painter and her colleagues decided to follow up on a hypothesis from an English physician, David Barker, who theorized that conditions in the womb can have permanent effects on fetal development.

The Dutch researchers looked at blood samples from people born in the region affected by the Hunger Winter. The scientists found that those born during the famine were significantly more likely to develop diabetes or pre-diabetes by age 50 compared with those born just a year or so earlier or later. (The difference was 21 percent versus 15 percent.)

Painter believes this is Barker’s hypothesis (called the “thrifty phenotype”) at work. Fetuses developing in mothers who are getting barely enough to eat have to adapt. “They adapt in a way that puts them at an increased risk of developing diabetes as adults,” she explains.

With not enough nutrients coming through the placenta, the fetus’s pancreas — which produces the insulin that prevents diabetes — will not develop correctly, she says, and by the time that person is 50, it will be unable to do its job successfully.

Painter believes the process is at work in Cambodia. “There’s a good likelihood that the starvation that Cambodia saw in the late 1970s can contribute to their current rise in diabetes,” she says.

From scarcity to abundance

Lim Keuky suspects that the rise in diabetes has been made worse by the fact that food availability in Cambodia is much better today than in years past.

“Now [we] have so much to eat that the pancreas cannot support the food every day,” he says.

And he says Cambodia must prepare for an even greater number of diabetes cases in the years ahead.

He says too many Cambodians ignore the early symptoms of diabetes, such as excessive thirst or hunger, fatigue, and numbness in the hands or feet. Letting these symptoms go without treatment leads to organ damage.

Experts say other developing countries that experienced periods of starvation should be on the lookout for similar spikes in diabetes. Researchers in China recently reported that children born there during the 1959-1961 famine were more likely to develop diabetes later in life than people born just before or after, and there have been similar reports from southern Africa.

Animal studies raise an even more worrisome possibility. “There is a multigenerational effect,” says Painter.

In other words, the changes in how our genes function that are caused by famine may get passed on to future generations. And that means Cambodians born long after the Khmer Rouge’s regime may also suffer physical effects from those years of brutality.

This series was produced with support from the Pulitzer Center on Crisis Reporting.