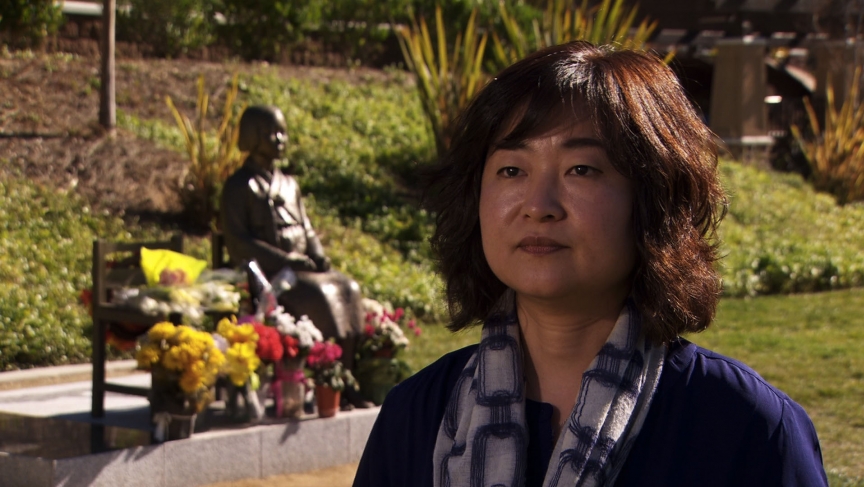 Earlier this month, a group of Japanese officials came to Glendale, Calif., with an unusual demand: They wanted the city to take down a public monument in the park next to its public library.

The bronze statue of a girl in traditional South Korean dress seated next to an empty chair is a memorial to the 70,000 to 200,000 Korean, Filipina, Chinese, Taiwanese, Indonesian and Dutch “comfort women” — a euphemism for sex slaves — conscripted into Japanese military brothels during World War II. It's the fourth memorial to the comfort women installed in the United States since 2010, and it aims to keep American focus on a history that many Japanese would rather forget.

“They were raped maybe 10 times a day. On weekends, as many as 40 to 50 times a day. The majority of them were teenagers,” says Phyllis Kim, who as part of Los Angeles' Korean-American Forum helped bring the statue to Glendale. “There are victims who are still alive, and waiting for an apology.”

Japan admitted the military's role in the brothels more than 20 years ago, and some victims were paid reparations from a private fund. But Japan has never offered an official apology or direct compensation to the victims, which many South Koreans, and Korean Americans, demand. Korean-Americans have been working for years to use US influence to put pressure on Japan to change its stance. Japan maintains it's done enough.

“Because of the ties between these two countries and because of the status of the United States on the world scene, what we think as Americans plays a role, and can have an impact on how Japanese react,” Kim says.

That's exactly what has some Japanese so angry.

“America is known as a fair country,” says Yoshiko Matsuura, a Tokyo city assemblywoman and the leader of the Japanese group that visited Glendale. “Why is it right to erect this kind of statue in America?”

“This is not the right place for them to wage this kind of anti-Japan propaganda,” he says. “Why do they do it in another country?'

Sumori is working to fight the memorials, in Glendale, and any other city that might consider putting one up. “I had to do something to preserve the integrity, honor and pride of our country,” he says.

The Korean American campaign to build municipal memorials to the comfort women has faced a Japanese counter-campaign to keep them out. Since the Glendale statue went up last summer, three delegations of politicians have come from Japan to complain. Glendale's city council has received thousands of angry emails, and its sister city in Japan canceled a student exchange program.

Palisades Park, N.J., the home of another memorial, has faced similar complaints from Japanese.

Kim sees an upside to the dust-up here. It’s getting media attention in Japan, too — and reminding people about what happened to the comfort women.

“A lot of people, I think, got a second chance to think about it,” she says. “Every German kid knows about the Holocaust. But the Japanese government just tries to downplay what happened.”

Almost 70 years since the war ended, the issue of the comfort women is still a major source of friction between South Korea and Japan. In November, South Korea's president Park Geun-hye said it would be “pointless” to hold bilateral talks with Japanese prime minister Shinzo Abe until it's resolved. Abe himself has raised South Korean and international hackles in the past by denying the women were coerced, and most recently, by visiting a disputed war shrine.

Shihoko Goto, a Northeast Asia expert with the Woodrow Wilson Center, says, at the highest levels, the disputes over history are a power play. "This whole idea about revisiting history and re-interpreting history is really a battle for who is the top dog in the region," she says. "Korea wants to make clear that it is no longer playing second fiddle to Japan."

But for Japanese who are protesting the monument, it's about deep questions of identity and cultural pride.

Matsuura's delegation claims the “comfort women” were prostitutes, and say they have US military documents that prove it. Few Japanese politicians will go that far, but some still say the military wasn’t behind the brothels, or the women weren't coerced.

"A lot of Japanese people would sympathize with that perspective, especially the older generation," says Goto.

The few surviving comfort women, all in their 80s and 90s, cry foul.

“I was walking along the side of the road when I was captured and taken away,” says Ok-Seon Yi.

It was 1942, and Japanese and Korean soldiers grabbed her and threw her in the back of a truck. Her family never knew what happened to her, she said, and gave her up for dead. She spent three years at a military brothel in China. She was 15.

She's 87 now and lives in a home for survivors like her outside of Seoul. She's tiny, with white hair, frail and quiet — until the subject turns to Japan.

She shakes her fist. “The Japanese government are thieves,” she says. “They're trying to rewrite history.

“They have no right to take away my honor and dignity,” she adds.

She says she's thankful for the memorials in the United States, and says America is the only country that can right the historic wrong.

But it's not clear what impact memorials and public opinion in the US can have on policy in Japan. The US House of Representatives has already called on Japan to apologize, in a 2007 resolution and again earlier this month, in an attachment to a spending bill. So far, it hasn't spurred any changes.

But that doesn't appear to be deterring Japanese, Korean Americans, and their supporters on both sides of the issue. Most recently, they've taken the dispute to the White House.

A “We the People” whitehouse.gov petition calling for Glendale to take down its monument has more than 126,000 signatures so far. A counter-petition to protect the statue is at 104,000 and counting.