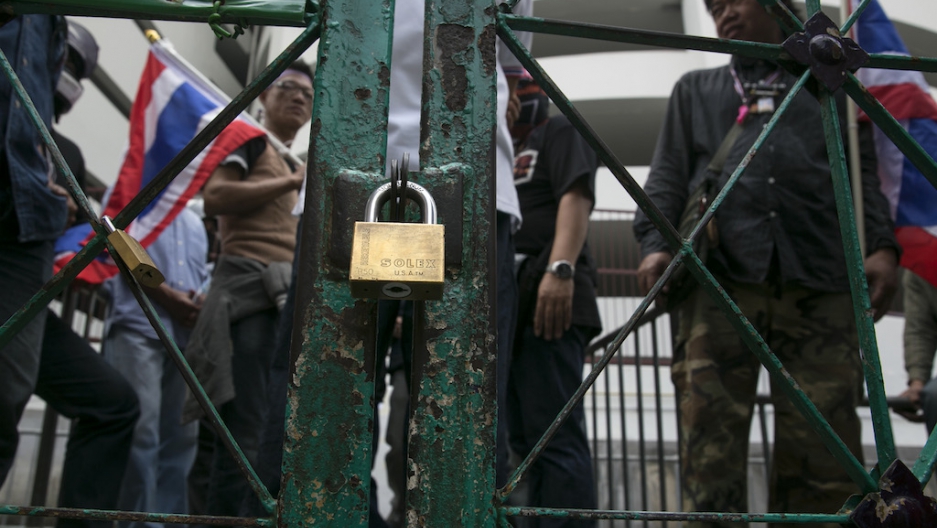 Protesters linger outside a locked polling station gate. Advance voting for the February 2nd general elections was unable to continue because the protesters blocked the station on Jan. 26, 2014 in Bangkok. The anti-government protesters vowed to stop all elections from taking place in the capitol city.
Credit: Paula Bronstein
Share

BANGKOK — In Thailand’s capital, voting can require not just a sense of civic duty, but also nerves of steel.

A self-proclaimed “people’s coup” movement — which has already invaded government ministries and vowed to abduct the premier — is now hell-bent on stopping an upcoming election by forcibly preventing voters from entering polling stations.

On Jan. 26, an advance voting day preceding the big Feb. 2 election, the movement gave Thailand a preview of its tactics.

Throngs of protesters successfully shut down almost all of Bangkok’s polling stations. In some districts, they shackled gates with steel chains. In others, they sprawled on the ground to form a sea of bodies, and dared would-be voters to step on their heads.

Many undeterred voters were physically restrained or jeered by noisy mobs.

This generated several unflattering scenes that ricocheted through social media: a would-be voter violently choked at one precinct; a middle-aged woman manhandled in another. There was also resistance: a protest captain was shot dead by unidentified gunmen while shutting down polls. The killing was captured by a camera phone.

“Of course, voters may feel afraid,” said Chaiya, a 36-year-old merchant and protester, who aided a throng of hundreds in forcing a polling station to shut its gates. “We don’t mean to hurt anybody. But they need to know nothing good will come of this election.”

Thailand’s politics have again taken a turn for the surreal. According to the uprising’s leaders and their faithful, they are killing off the coming election under the banner of “democracy.”

Their goal: toppling the elected government and filling the vacuum with a non-elected council of virtuous Thais who will purify the nation of corruption. They promise to restore elections in a year, perhaps longer.

“We’re not throwing away elections altogether,” said Akanat Prompan, the uprising’s chief spokesman. “We’re just saying that once reform is done, we can return to elections.”

The uprising’s leader, a former deputy premier named Suthep Thaugsuban, has “stated very clearly that he’d like to have everything done within a year,” Akanat said. “Whether that’s enough assurance or not, well, he’s stated that very clearly.”

Though the uprising calls itself the People’s Democratic Reform Committee, its insistence that election sabotage will uplift “democracy” has taken a beating in Thailand and around the world.

The poll blockades were admonished by the US State Department and Human Rights Watch among others. In a sign of the times, even neighboring Myanmar, a nation notorious for oppression and disorder, expressed concern over Thailand’s instability.

“Commotion and sporadic violence and intimidation around election day is not uncommon,” Thitinan Pongsudhirak, a senior political analyst with Thailand’s Chulalongkorn University, told GlobalPost. “But the systematic prevention of voters exercising their rights is unprecedented.”

“I think we’re facing a voting showdown on Sunday,” Thitinan said. “But preventing people from [advance] voting was not so successful. ... There’s a risk they may feel more desperate and thereby choose a more radical path that could lead to violence from both sides.”

Democracy by other rules

It is a foregone conclusion that Thailand’s ruling party, Pheu Thai, will triumph at the polls — particularly since the opposition Democrat Party, whose stalwarts engineered the uprising, have abandoned the race. The Democrat Party has not won an election since the early 1990s. Pheu Thai, led by Prime Minister Yingluck Shinawatra, belongs to a political network that has won every election for more than a decade.

Though the uprising lacks widespread support, it has allies in high places — including Thailand’s election commission, which seeks to push back the election.

Even a key official with Asia’s premier election-monitoring group, the Asian Network for Free Elections, is mocking the election. One of its top board members, Sakool Zuesongdham, told GlobalPost that Thais preparing to vote are misguided and praised police for refusing to break up poll blockades.

“Voters are quite naive about politics,” Sakool said. “They have to work hard every day and don’t have time to catch up with information. They only hear the government’s side.

“These protesters have high aspirations to change Thai politics,” he said. “If the prime minister still insists on this election that means she’s very stupid.”

As in English, the Thai word for democracy (“prachatipatai”) connotes a noble ideal that all sides embrace — including the uprising.

But the uprising’s vision of democracy — with its non-elected leaders and voting sabotage — is out of synch with the democracy’s definition in the West.

In their eyes, suspending electoral rule is a price worth paying to topple what they call a “tyrannical regime” — one that nevertheless tolerates their seizure of streets, polls and key ministries. It is impossible to imagine a Gaddafi- or Kim Jong Il-caliber tyrant stomaching even a fraction of the crusade’s tactics.

Many among the uprising liken the government to a “dictatorship” despite its landslide election victory in 2011.

The Pheu Thai party is riddled with legitimate allegations of corruption and misrule. But that hardly distinguishes them from other ruling parties in Thai history. Still, the opposition deems the government illegitimate. “We’re not trying to create a failed state,” Akanat said, “but a failed government.”

Election results notwithstanding, they contend that the mild-mannered Yingluck is merely a proxy. The party is influenced from afar by her jet-setting elder brother, the populist tycoon Thaksin Shinawatra, who as premier was forced out in a 2006 army coup. Thaksin now lives in a posh Dubai residence, where he seeks refuge from a corruption conviction.

The current uprising was sparked by a botched, late-night attempt by Pheu Thai to pass laws that would clear his charges and secure his homecoming.

The uprising’s wrath is focused on Shinawatra’s redistribution of state resources to the country’s vast, rice-farming heartland. The government’s poor-friendly policies have had mixed results. A $1-per-visit health care scheme has proven wildly successful. Their scheme to buy farmers’ rice at highly inflated prices is roundly considered a costly disaster.

But the heartland electorate — once politically disengaged and bought off by the highest bidder — has been awakened by the Shinawatras’ populism. So have many urban, working-class Thais. Previously taken for granted, they have now proven they have the numbers to determine winners and losers in Thai politics and keep Pheu Thai in power for years to come.

This shift of power to the upcountry has challenged the eminence of Bangkok, Thailand’s traditional power base since the days of the Siamese kings.

It has also erupted into a debate over the virtues of one-person, one-vote democracy. Unable to succeed at the polls, the vanquished have turned to the streets.

“Do they think we’re stupid?”

Protesters have seethed over their depiction in the mainstream Western press. The New York Times has described their “anti-democracy fervor” and the Washington Post editorial board called for a “harsh rebuke” from the White House. Even the English-language Bangkok Post, often sympathetic to the uprising, opined that “civil rights are crushed.”

“Do they think we’re stupid?” said celebrity protest leader Seri Wongmontha in a recent on-stage rant against foreign media arrogance. “It’s proven people with yellow skin are smarter than people with white skin ... Thais who study abroad get better marks than their classmates ... They think they’re better than us!”

A common sentiment among protesters is that Americans and Europeans — who arrived at democratic systems only after centuries of war and racial subjugation — are hypocritical in rejecting what is often called “Thai-style democracy.”

As one protester noted to GlobalPost, America’s earliest founding documents were composed by unelected men who were simply victorious in war.

“And how about the Magna Carta? That was hundreds of years ago. You’ve had hundreds of years to work on your democracy. We’ve had 80,” said 45-year-old protester Ai Pasuksomjit. (Thailand is eight decades removed from the direct rule of kings.)

“American democracy is good for Americans,” he said. “Can’t we have our own style?”

Many of the 30-plus protesters interviewed by GlobalPost expressed a sense of existential dread — a belief that Thailand is increasingly slipping into the hands of politicians without no moral integrity.

This feeling may be amplified by the frail state of Thailand’s 86-year-old king, Bhumibol Adulyadej, the world’s longest reigning monarch. As with systems in the United Kingdom or Spain, Thailand’s monarch is enshrined as head of state — a role presented as loftier than the rough world of electoral politics.

But the comparisons to England’s scandal-ridden royals end there. Thailand’s king is upheld as the sacrosanct pinnacle of Thai society. Speaking ill of the king is a criminal act enshrined in the constitution. Even those who have criticized the palace with irreverent innuendo have been imprisoned.

Because of his advanced age, the king’s public appearances are infrequent. But his image in Thailand is omnipresent: on massive signs, on the kingdom’s currency and on portraits hanging in shops and homes. Every film screened in Thai cinemas is preceded by a reel depicting his good works and scenes of Thais sobbing with gratitude.

Of the 30-plus protesters interviewed by GlobalPost, many said they’ve joined the protests to protect the monarchy’s future against power-hungry politicians. Roughly one in seven uprising supporters surveyed by the US-based Asia Foundation also said they came out to “protect the monarchy.”

“The big thing I can’t stand is any insult to the monarchy,” said Dtam Wejjapinan, a 30-year-old office worker and frequent protester. “I think some people want to put politicians like Thaksin on a pedestal like a president.” (In Thai, “president” is a loaded political term because it refers to a republic instead of a constitutional monarchy.)

“How many other countries would understand a democracy with a monarchy? There are only a couple of countries left with a constitutional monarchy with actual clout,” said Marc Osatananda, a 32-year-old, US-educated brand consultant who has helped shut down Thailand’s polling stations. “I think Thailand has a winning formula. But we’re still working on it.”