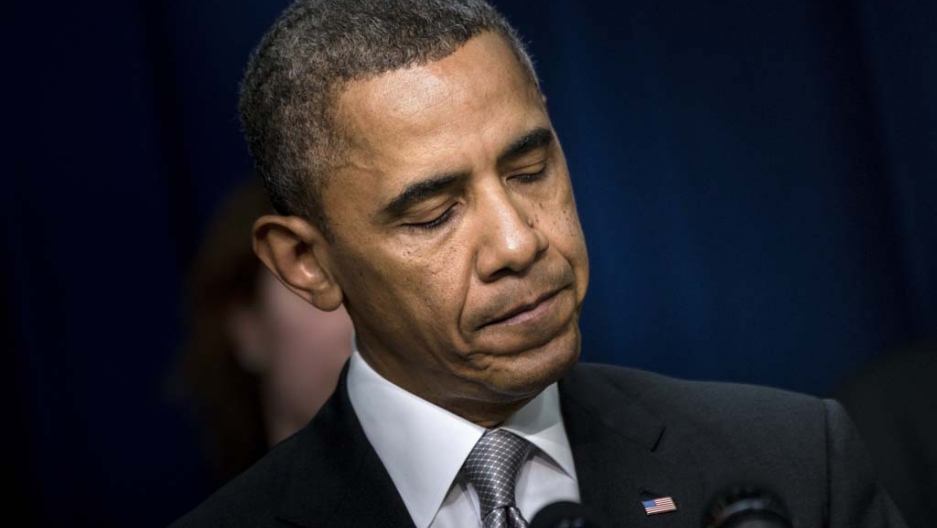 US President Barack Obama's fifth State of the Union address on Tuesday night had a few glaring omissions.

And there's likely a good reason why.

GlobalPost took a look at five big issues Obama failed to mention in his speech to Americans, and why he probably wishes they would just go away:

Leaks by former NSA contractor Edward Snowden — which revealed a massive phone surveillance program, among many other things — continue to haunt the Obama administration.

Losing respect both at home and abroad, Obama sought to quell growing fears over privacy with a series of minor intelligence reforms introduced last week.

He (very) briefly mentioned those reforms in his speech Tuesday night.

But his promises have done little to silence critics in Europe and elsewhere, and Snowden continues to reveal new — and sometimes even more damaging — information about the government spy agency.

The latest allegation? That the NSA is involved in industrial espionage as well.

More from GlobalPost: 16 disturbing things Snowden has taught us (so far)

The situation in Egypt got awkward for the Obama administration when the military ousted democratically-elected President Mohamed Morsi last July.

The United States responded to the coup (which they refused to officially label a coup) by cutting some military aid to Egypt.

Since then, the military-backed interim government has cracked down on protests and declared Morsi's party, the Muslim Brotherhood, a terrorist organization. Now, the person best situated to be elected president is Egypt's army chief, recently promoted to the highest rank of Field Marshal.

The third anniversary of Egypt's 2011 revolution, which was this past weekend, was marked by bloody clashes in Cairo. At least 49 people were killed and dozens injured, the latest in a pattern of violence that has taken over the country since the ouster of former strongman Hosni Mubarak three years ago.

It might be an inopportune time for Obama to tout the democratic advances in the Middle Eastern country, especially if a US spending bill restores $1.5 billion in aid to Egypt.

Remember when the Obama administration planned a pivot to Asia? Well, Obama probably wishes you didn't.

Tensions between Asia's largest powers, China and Japan, continue to rise over competing territorial claims on a small set of islands in the East China Sea.

Tokyo and Beijing have been at loggerheads for months over the Senkaku Islands, which Japan now controls. Late last year, China declared an air defense zone aroun the islands, which it calls Diaoyu.

Just last week, China sent three coastguard vessels into the 12-nautical-mile territorial waters near one of the Senkakus.

US Secretary of State John Kerry has expressed concern over the territorial row, and criticized China for its air defense zone. But beyond that there's been little sign of any pivot to Asia.

More from GlobalPost: The return of the rising sun

Iraq is witnessing the worst violence since 2006 and 2007, when the country was on the verge of all-out civil war.

Earlier this month, Al Qaeda-linked militants took control of Fallujah and Ramadi, cities in Iraq's Anbar province. Hundreds of US soldiers lost their lives fighting an insurgency in those same cities in 2004.

Obama kept his mention of Iraq vague in Tuesday's speech:

While we've put Al Qaeda's core leadership on a path to defeat, the threat has evolved, as Al Qaeda affiliates and other extremists take root in different parts of the world. In Yemen, Somalia, Iraq, Mali, we have to keep working with partners to disrupt and disable these networks.

He chose to highlight the fact that "all our troops are out of Iraq," but didn't mention that the United States is sending Iraq more weapons. (The weapons include ammunition for tanks and Hellfire air-to-surface missiles.)

More from GlobalPost: Ghosts of battles past haunt Iraq

To say things are unstable in North Korea is nearly always an understatement.

As the United States and South Korea prepare to hold a series of joint military drills in late February, the hermit kingdom is again ramping up propaganda.

Kim Jong Un has threatened nuclear war over the exercises, and last month vowed to attack South Korea "mercilessly" and "without notice" in a message delivered via fax.

American Kenneth Bae has been detained in the North for more than a year. And last month, the country held an 85-year-old Korean War veteran from California for weeks for alleged crimes during the conflict.

More from GlobalPost: North Korea execution: The nation is sliding into chaos. Or it's more stable than ever