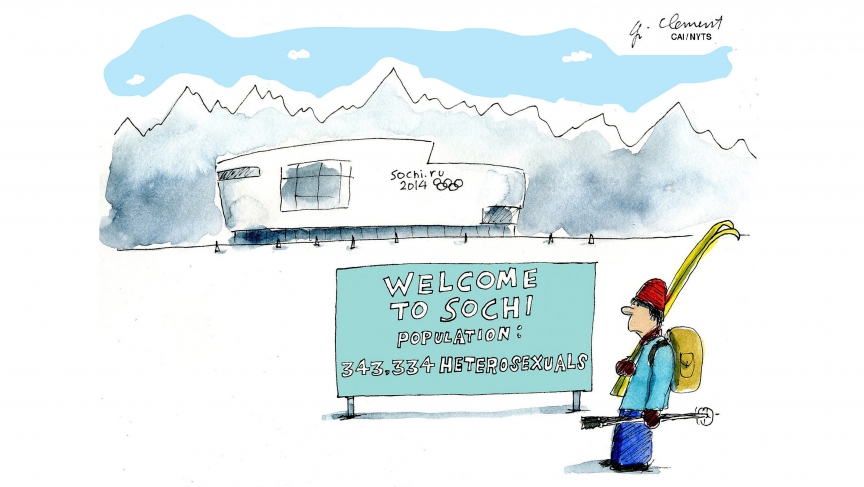 Canadian cartoonist Gary Clement has fun with the report that Sochi's mayor told a BBC reporter that there were no gay people in Sochi.

Anatoly Pakhomov, the mayor of Sochi — where next week's Winter Olympics will be held — made headlines around the world after he told the BBC earlier this week that there were no gay people in his town. It's a claim that strains credulity, even in a country that has moved as strongly against gay rights as Russia has.

Pakhomov added that his community would welcome gay people at the sporting event, so long as they respect Russian laws prohibiting "homosexual propaganda." That's good, since opposition leader Boris Nemtsov helpfully pointed out the existence of four gay bars in the city. The BBC has the full story.

Well, this is one way to get a date

Lonely bachelors across the world are finding solace in the arms of Japanese girlfriends — who exist only in virtual reality.

They're using LovePlus, a Japanese dating simulator created for Nintedo's DS game player. It offers three different virtual women and many "bachelors" have even been baking real cakes for their fictitious girlfriends, as the Huffington Post reports. Although the game is only available in Japan and uses the Japanese language, it has acquired fans of all ages in many countries.

The e-cigarette may undo decades of anti-smoking campaigns

Electronic cigarettes are developing quite a following, including among people who have never smoked. And that's got health experts worried.

The e-cigarettes were initially designed to help smokers cut their health risks and even their habit. The cigarette lookalikes deliver a shot of nicotine to the lungs, without the many harmful other components in smoke. But now, government data indicates that 10 percent of high school students have tried e-cigs.

The Takeaway looks at how researchers are racing to figure out how e-cigarettes will impact public health, as advertising for the devices seem to be making smoking trendy and sexy again.

That hookah you're smoking isn't harmless, either

There's another new tobacco trend popular with young people in Detroit and elsewhere. It's Shisha smoking, or using a hookah or water pipe to smoke flavoured tobacco.

New hookah lounges are springing up across Detroit. There's a perception that smoking in this way is less dangerous than using regular cigarettes — but that's not true, as Basim Dubaybo of Wayne State University's School of Medicine told PRI’s The World.

Armed robbers breaking into your home in the early hours of the morning is surely terrifying — and Dublin priest Arthur O'Neill experienced it first hand this past weekend.

The Catholic priest in Cabinteely, Dublin, woke up on Sunday to two men pointing a gun at his head, demanding money. In the same situation, many people might have handed over anything they had to make the intruders leave — but Father O'Neill is made of stronger stuff. "I told them they had no chance and that they were barking up the wrong tree," he told thejournal.ie.

Instead, he began reciting a sermon he had prepared for a service later that day. The men fled and, instead of being thankful, Father O'Neill demanded they leave his cell phone so his parishioners could contact him. According to O'Neill, it all turned out OK in the end, even if he did have to resort to some "un-priestly language" during the incident.

No, your pet parrot cannot teach you to drive

A British woman had her car seized after police caught her driving on a highway with a learner's permit — supervised only by her pet parrot.

West Yorkshire Police tweeted a photograph of the parrot as a warning to other learner drivers with the caption: "Say hello to my little friend. Unfortunately his owner has a provisional licence, and since parrots are not authorised to supervise learner drivers, her vehicle has been seized by us on the M62." The Independent newspaper has the story.

Images that sum up your city - a beautiful gallery of pictures from readers http://t.co/pR0m7HHJhj

The remnants of a tropical storm and the annual monsoon hav produced more than 48 inches of rain in the southern Philippines this month — an area already suffering from the damage done last year by Super Typhoon Haiyan. At least 64 people are dead or missing from the latest rains, government officials report, and 100,000 people have been left homeless. Another storm is expected to bring more rain this weekend, with some areas receiving 12 inches in a 24-hour period, AccuWeather reports.