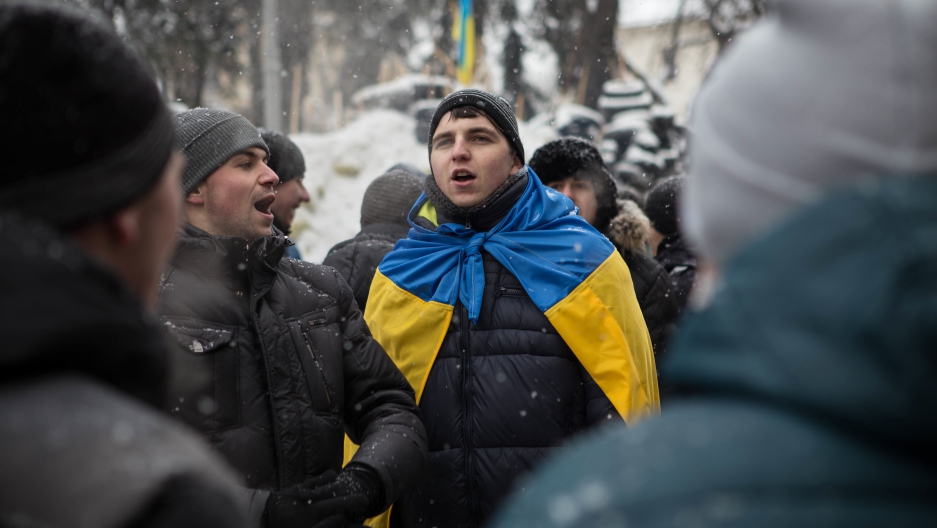 LVIV, Ukraine — For Andriy Sadovyy, last Wednesday was the darkest of days.

The mayor of western Ukraine’s largest city was taking part in a local ceremony commemorating Unity Day when violent clashes broke out in the capital Kyiv between police and protesters, leaving at least two demonstrators dead on the spot.

“I never thought we’d receive news about bloodshed on that very day,” he said.

His pain intensified after a Lviv native who participated in the protests was kidnapped from a state hospital in Kyiv and beaten to death.

He says that prompted him to give his tacit blessing to the occupation of the regional administration building in Lviv.

Last week, protesters forced out the presidentially appointed governor and converted the grandiose, 19th-century structure into a revolutionary command center with full support from the opposition-dominated regional council.

It’s no accident that happened here.

The country is evenly split between its western half, the Ukrainian-speaking stronghold of pro-European and opposition sentiment, and its east, which provides much of embattled President Viktor Yanukovych’s support base.

As the unofficial capital of western Ukraine, Lviv has played an outsized role in the two-month-long protests that have rocked the capital since Yanukovych rejected a planned trade deal with the European Union last November in favor of a $15 billion bailout from Moscow.

Demonstrators from here and other western regions have flocked en masse to provide people power and logistical support for the protester camps in the capital.

As their movement spreads nationwide and more regional administrations across Ukraine fall under siege by demonstrators, officials and protesters here say this centuries-old city of 725,000 will continue to lead the charge.

“Lviv shows the highest example of self-organization and self-discipline,” Sadovyy said. “Without Lviv, there is no Kyiv and there is no Ukraine.”

On these picturesque, cobblestone streets, many locals look fondly on their long history under European powers such as the Austro-Hungarian Empire, whose architectural mark lives on in faded, imperial-era buildings.

Unlike predominately Russian-speaking eastern Ukraine, which was ruled by Moscow for three centuries, western Ukraine fell under Russian control only during World War II and has remained a bastion for Ukrainian nationalism where anti-Russian sentiments run deep.

Some observers say its role is especially important now.

“The decisions made here have major resonance in other regions, especially those parts where regional councils have a large share of opposition deputies,” says Vasyl Tereshchuk, a local journalist.

Lviv’s pro-opposition legislature has recognized a “people’s council” — a parallel governing body that has declared itself the sole legitimate representative of Ukrainians in the region and claims its authority from “the Maidan,” as people call Independence Square, the nerve center of the protests in Kyiv.

Other regions in western Ukraine have followed suit. Some have reportedly also banned the Communist Party and are looking to do the same with the ruling Party of Regions.

Inside Lviv’s occupied administration building, however, the scene is peculiar.

Clean-cut elected officials shuffle through doorways guarded by masked, aggressive-looking revolutionaries, past a makeshift medical station and around the corner from the rebel command center in charge of security.

More from GlobalPost: 9 gritty photos of life as a Kyiv protester

The paramilitary trappings seem strange given the low risk of anti-revolutionary resistance in a city where anti-regime feelings are nearly ubiquitous.

In some southern and eastern regions, however, protesters who attempted to storm local administration buildings have been met with violence from both police and pro-government thugs.

Andriy Sokolov, the “commandant” in charge of security here, suggests the occupation in Lviv is largely symbolic and meant to serve as an example.

“Imagine a country in which half of the regional administrations are occupied and dysfunctional,” he said. “It’s the de facto discrediting of a government that’s no longer able to control its resources in the regions.”

If officials openly siding with revolutionary forces pose a dilemma for reconciling the two sides in the country’s crisis, it’s nothing compared to the complexity of Ukraine’s deep cultural and historical differences.

Locals still venerate wartime leaders from the Organization of Ukrainian Nationalists (OUN) and the Ukrainian Insurgent Army (UPA), nationalist guerilla organizations that fought both Nazi and Soviet forces — and are branded traitors by many in eastern Ukraine who supported Soviet rule.

Those groups remain controversial for their fleeting allegiances with Nazi Germany.

Nevertheless, their symbols — including a red and black flag and images of OUN chief Stepan Bandera — are a common sight at the protests in Kyiv and elsewhere, and their supporters tend to be the most diehard.

What’s considered “patriotic” in west is often seen as “radical” in the east.

Yanukvych’s Party of Regions hammered on that point in a recent statement condemning the seizure of state institutions.

“At the heart of these anti-constitutional decisions appears in full view the neo-Nazi character that has so carefully been hidden behind democratic rhetoric and human rights,” it said Monday.

Although critics blame the regime for playing up western radicalism, few deny at least some truth in the accusations.

Far-right, quasi-militant groups such as Right Sector — a loose conglomerate of nationalist groups that openly advocates the use of force — have been at the forefront of the violent clashes with police.

He plays down concerns about Ukraine’s cultural and historical differences, arguing that politicians have attempted to “score dividends” using “myths” of a divided country.

“In recent years, many people from eastern Ukraine have come to Lviv and their several days here have cardinally changed their impressions,” he said.

On the streets, although people here are proud their fellow Lviv natives are helping to power the protests, the violence in the capital has struck a bitter nerve.

Thousands attended funerals for two of the Lviv residents who died in Kyiv. Their images now adorn shop windows and lampposts, many bearing captions that say “Murdered by the government.”

“Our people are heading to Kyiv to fight for Ukraine and make sure this hasn’t been futile,” he said. “If it wasn’t for us, the nation might not have risen up.”