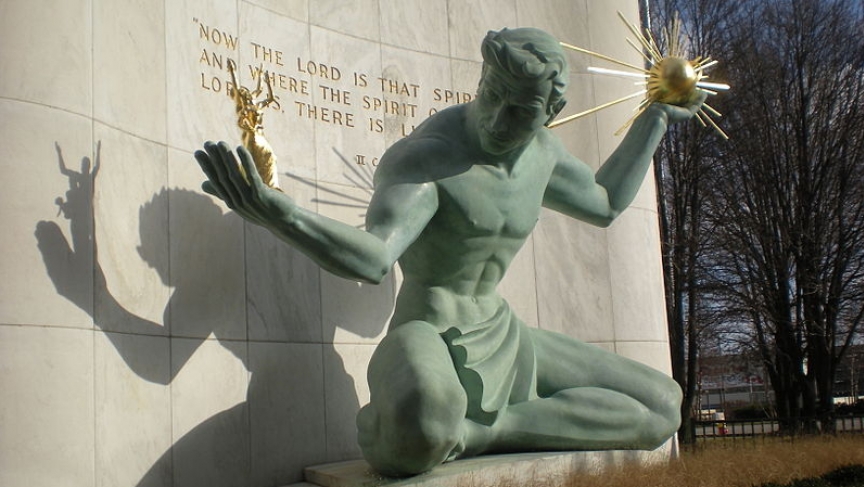 The Spirit of Detroit statue in downtown Detroit, Michigan may be a symbol of the once prosperous city's resolve to come back from bankruptcy.

There are two topics that President Obama is expected to tackle in his State of the Union address: the economy and immigration reform.

Both are key for the country's future, and for the future of one American city in particular: Detroit.

The Motor City is not only bankrupt, but it's been steadily losing population, as well.

Enter Michigan Governor Rick Snyder who, in his State of the State Address, linked immigration to the future of Detroit.

"We need to encourage immigration in our state," the governor said. "That's how we made our country great. We need to focus on legal immigration and make sure people know Michigan is the most welcoming place, and I'm intent on moving forward with that."

At a press conference last week, Governor Snyder took the issue of immigration a step further. He asked the Obama Administration to designate an additional 50,000 employment-based visas for skilled immigrants and entrepreneurs during the next five years. Some immigration law experts say such a plan would have huge hurdles to clear, namely approval by a bipartisan US Congress and a special provision by the Department of Homeland Security.

The chances of that happening are slim to none.

But as the Michigan governor has proposed, the visas would seek to attract highly skilled, entrepreneurial, legal immigrants who commit to living and working in Detroit, thereby contributing to its economic and population growth.

"Let's bring 50,000 high skilled immigrants to Detroit,” he said at a press conference last week. “Let's create an environment where they can live and work in Detroit, and create jobs. Think about the power and size of this program and what it can do to bring back Detroit. It's outstanding."

WDET's Martina Guzman has been gauging reaction to the immigration visa proposal. Guzman says representatives of Detroit's existing immigrant community are asking, "Why don't you invest in the workers that are here? There are people that have been here in Detroit for multiple generations, that have been impacted by this downturn in the economy, and that would love nothing more than to have the training and the skills to get an IT job and to fill these positions that [the governor says] are so desperately needed."

One Detroit resident Guzman interviewed is Elizabeth Miranda, a 51-year-old Mexican American mother who says she gets contract jobs in Michigan, but hasn't been able to get a full-time job for years.

"Why don't they work on stopping deportation of immigrants that are already here, and who are already contributing to Detroit?” asks Miranda. “Some of them already have developed businesses. Why can't they make it easy for them to get the proper documentation? Why can't we train children from immigrant communities that are already in high school and get them into the pipeline for these IT jobs that Governor Snyder says are so desperately needed?"

On the other hand, Guzman reports that the visa proposal has a good share of supporters, including Andrew Barnes, a 30-year-old consultant who oversees hiring for IT companies. Barnes backs the governor's visa proposal wholeheartedly, saying it's desperately needed.

"I'd love to hire US employees. I would love to hire someone from here,” he says. “But when I can't find them, I have to go elsewhere. It's really difficult to find IT people in Michigan because companies want something very specific. And the reality is, they don't want to have to train anyone, it takes too long, and they want someone instantly and immediately."

Most of all, Guzman says that Detroit's immigrant communities want immigration reform.

"Michigan is a border state, it borders Canada. And because of that, Michigan has a much higher presence of Immigrations and Customs Enforcement (ICE),” Guzman says. “This Latino community in Detroit has been growing and growing for many years, and when Detroit was in its economic downturn it was the only community that actually had a serious bustling economic movement. And now you see that community leaving because of the presence of ICE. So what I think they feel is: 'why don't you address these problems so that we don't have to leave the city, and we can continue to contribute to Detroit's economy?'"