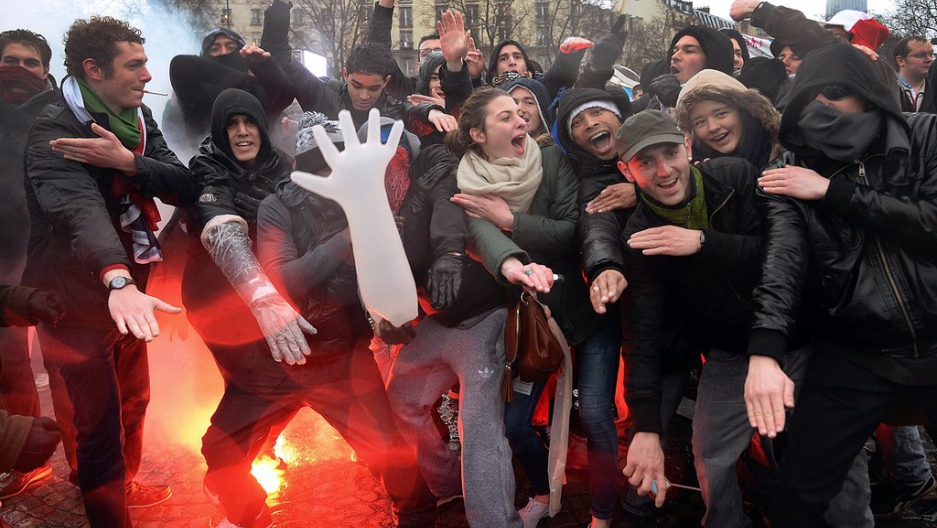 Two men perform a 'quenelle' during a demonstration called the 'Day of Anger' supported by the conservative 'French Spring' movement and the fundamentalist Christian group Civitas, to protest against French policy, on January 26, 2014 in Paris. The quenelle, which involves holding the right arm straight while pointing it towards the ground and touching the right bicep with the left hand, has been described as a sort of disguised Nazi salute.
Credit: Pierre Andrieu
Share

LONDON — What is the quenelle? When two prominent French athletes — soccer player Nicolas Anelka and basketball player Tony Parker — made the gesture in front of their fans, they came in for a shower of criticism.

For Anelka it is also a statement of support for his friend, Dieudonnee M'bala M'bala, the French stand-up comedian and performance artist who popularized the gesture.

So is the quenelle a mere "anti-establishment" gesture popular among France's disaffected minority and working class youth? Or is it anti-Semitic?

The act of making the quenelle contains the answer.

If you're old enough to have seen the classic film Dr. Strangelove (celebrating its 50th anniversary this month) you will remember one of the film's funniest moments. Peter Sellers appears as the doctor, a former Nazi rocket scientist whose right arm was blown off in a lab accident. In one scene he loses control of the automated prosthetic arm put in its place and it keeps trying to make the Nazi salute. His good arm reaches across his torso to try and shove it down.

That's the quenelle gesture. The right arm starts to come up straight on the “Sieg Heil” route and the left reaches across to push it down.

OK, so the origin may lie in a black comedy view of Nazi war criminals. Is that enough to make the gesture anti-Semitic?

It has been popularized by the comedian Dieudonnee, (he goes by his first name). Dieudonnee says he isn't anti-Semitic. Indeed, he first came to prominence 20 years ago as part of a comedy duo with Elie Semoun, who is Jewish.

They broke up about a decade ago and now the pair no longer speak.

Dieudonnee claims to be anti-Zionist and anti-colonialist but not an anti-Semite. But in this revealing interview with Iran's Press TV he goes a little further into his views about Jews.

If you don't have the time or inclination to listen to the almost nine-minute-long clip these are the relevant statements. At around 6:58, the comedian says Jews have "commercialized" the Holocaust and that "now it is something we can laugh at."

Then at 7:49 he says the Zionists "have organized all the wars and all the disorders on this planet. They were involved with the slave trade. We should know that 90 percent of the ships that relocated the Africans to the West Indies were owned by Jews and the majority of the slave traders were Jews."

Given that most Israelis' ancestors during the centuries of the slave trade were living in enforced poverty in European ghettos, that claim can only be taken one way. It is first order anti-Semitism.

Another question is, do Dieudonnee's fans recognize it as such? Some clearly do because there are plenty of photos flashing around the web of people performing the quenelle outside synagogues or at Auschwitz and other sites associated with the Holocaust. And across Europe, groups of demonstrators have gathered to flash the quenelle. Some have brought pineapples to these rallies, a reference to "Dieudonne’s coining of the term 'shoananas,' a mashup of the Hebrew word for Holocaust and the French word for pineapple that is seen as a safe way to suggest the Holocaust is a myth while not running afoul of French laws prohibiting Holocaust denial."

Others see it as just a joke, as this well-produced video demonstrates.

"He's selling tickets because he's controversial," Poirier says. In her view he attracts French people who "like to think of themselves as rebellious and anti-system."

Anelka, 34, certainly fits that description. A gifted player, he came to prominence at top English football club Arsenal in 1999. But he left after a year and has never really been able to fit in anywhere. He has played for eight other teams in the ensuing 15 years including Real Madrid, Manchester City and Chelsea.

Anelka currently plays for West Bromwich Albion, a mid-table English Premier League team. The star has been charged by the Football Association, the organization that oversees English football, with making a gesture that was "abusive and/or indecent and/or insulting and/or improper."

Anelka is appealing the charge, which carries an automatic five-match ban.

His team is already paying a price. West Bromwich's sponsors Zoopla, a real estate website, say they will end their deal with the team, worth a reported $5 million, at the end of the season. Zoopla is co-owned by a Jewish businessman.

As for Dieudonnee, his shows are now banned under France's laws restricting hate speech. Last week he was arrested after allegedly firing a rubber bullet at two court bailiffs.

The bailiffs had been sent to his house to serve a writ — it's not clear for what — possibly related to his bankruptcy proceedings.

The comedian is preparing a new show. It is being closely watched to see if he figures a new way to stick a finger up to public opinion or keep using that hand to push down a Nazi salute.