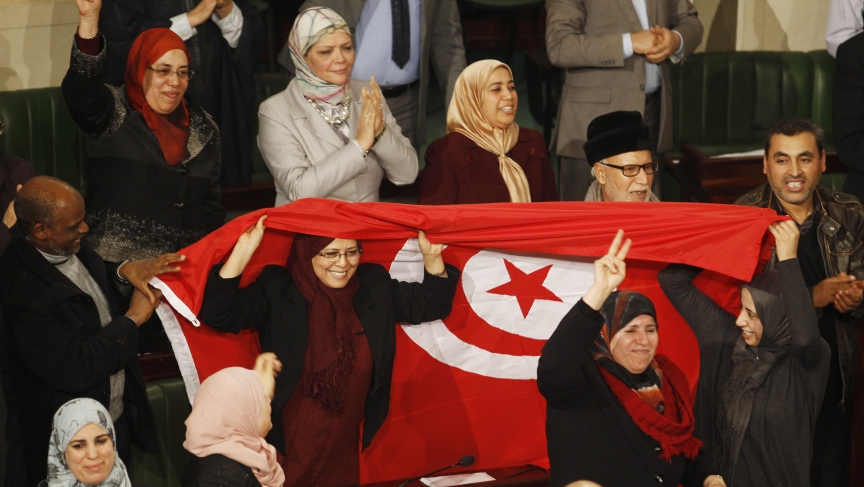 Members of the Tunisian parliament wave flags after approving the country's new constitution. Tunisia's national assembly approved the new constitution on Sunday in one of the final steps to full democracy three years after protests erupted into an uprising that toppled autocrat Zine el-Abidine Ben Ali.

The optimism of the Arab Spring seems to have evaporated in the past three years.

Just look at Syria and its brutal civil war. Or Egypt, where the third anniversary of the revolution was marked by more violence, and where a new military strong man seems to be gaining the upper hand. But then there's Tunisia, the nation where the Arab Spring began.

Tunisia just passed a new constitution, based on consensus and compromise. Borzou Daragahi, Cairo correspondent for the Financial Times, says the process by which it passed is outstanding. "You had Islamists, liberals, leftists, avowed secularists, supporters of the former regime even, having a hand in the crafting of this document."

Daragahi says in terms of content, the constitution affords strong protections for women's rights, and affirms Tunisia's status as a secular state, despite identifying Tunisia as an Arab and Muslim country.  Some people are not happy, such as Daragahi's friend who is now barred from running for president as an atheist, while hard-line islamists are disappointed that Sharia law was not recognized as "a pillar of the constitution."

Tunisia has a strong Islamist movement, the Nahda party. But Daragahi says the Islamists looked at what happened in Egypt and decided the best way to remain a stakeholder in Tunisia's politics was to compromise. But not only the Islamists, "even the Tunisian liberals and secularists" have become "wary and frightened by the Egyptian example."

Meanwhile, Egypt looks like it's heading in the other direction. Military strong man, Abdul Fattah al-Sisi, on Monday was promoted from general to field marshal, "a rather puffy title" says Daragahi. "But there is a real choreographing of the elevation of Field Marshal Abdul Fattah al-Sisi to the presidency." He says this is being pushed by the military and spurred on by a business elite with close ties to the former regime of Hosni Mubarak.

Daragahi says it's impossible to predict where this might lead, but "given the mood on the street here (in Cairo), people might vote for him to be dictator for life, given the desperation, the unhappiness and the turbulence. They want stability, stability, stability."

He says political dissidents are being scapegoated, and not just Islamists, but liberals and the activists who made the Arab Spring happen in the first place.

"One of the saddest things is to see leftist and liberal political activists getting arrested, and ordinary people cheering them on, cheering the security forces on, as they put these people in jail," she says.