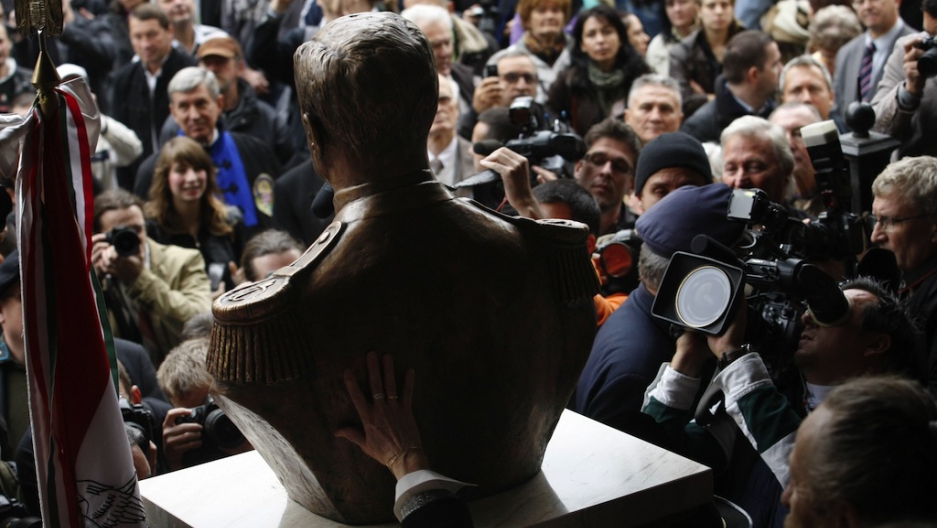 Photographers, cameramen and visitors crowd around a statue-bust of Hungary's wartime leader Miklos Horthy after it was unveiled in Budapest on November 3, 2013. The unveiling provoked protests of antifascist demonstrators. Horthy, the autocrat who led the country into World War II as an ally of Hitler, passed anti-Jewish laws and oversaw the first wave of deportations of Hungarian Jews in 1944.
Credit: FERENC ISZA
Share

EVANSTON, Illinois — As President Barack Obama awaits Senate confirmation of his choice for US Ambassador to Hungary, hopefully he knows that his appointee, Colleen Bell, a Hollywood television producer, has complex tasks ahead.

Hungary is a NATO member, a member of the European Union and was in the forefront of democratic transformations a quarter century ago. But during the past four years Hungary has built an autocratic regime with open anti-Semitism in its parliament and is currently engaging in whitewashing the reign of Hitler-ally Admiral Miklos Horthy.

Horthy was leader of Hungary between 1920 and 1944. His crimes included Hungary's active cooperation in deporting and annihilating more than 400,000 Jews during World War II.

A new statue now stands in Budapest honoring Horthy. It casts a strange shadow in this historic city with one of the highest Jewish populations in Europe.

This history touches my family personally.

My father, now 72 years old, was not quite three years old on a train headed to Auschwitz in 1944. He would have perished there and I would never have been born had that train not been diverted to Vienna placing him in a labor camp rather than a death camp.

After the war, my grandmother returned to Budapest to raise her two sons despite having lost her husband and other relatives in the Holocaust. My father, limited in educational opportunities, nonetheless pursued an academic career and became a prominent scholar first in chemistry and then in the history of science.

During World War II, Horthy also sent hundreds of thousands of Hungarian troops, unprepared and unequipped, to fight the Soviets, resulting in certain defeat, and he declared war on the United States. He was a war criminal by any definition even if not officially; he never stood trial and lived out his remaining years in Portugal.

Today, Horthy's bust stands on the premise of a Calvinist church in downtown Budapest, visible to passers-by. In November, a neo-Nazi member of the Hungarian Parliament spoke at the bust's unveiling ceremony. This same representative, not long beforehand, had demanded the identification of all Jews in the current Hungarian Parliament, justified as a security measure.

The United States, through a statement issued by the US Embassy in Budapest, has asked for "swift, decisive, unequivocal condemnation by Hungary's highest ranking leaders" of the bust. Although a member of Hungary's current governing party condemned the unveiling of the bust, he did so ambiguously, and refrained from condemning Horthy and his regime. Prime Minister Viktor Orbán has remained noticeably silent on the matter.

As the daughter of a survivor, it is unthinkable to me that a person like Horthy would be honored, given his role in so much suffering during World War II.

Horthy and his regime were autocratic, semi-fascist, and anti-Semitic throughout their quarter-century reign. As early as 1920, Hungary was the first country in post-World War I Europe to legislate an anti-Jewish law, numerus clausus or "closed number", severely limiting the number of Jews at Hungarian universities.

Toward the end of the 1930s, increasingly brutal anti-Jewish legislation was enacted, eventually culminating in the Hungarian Holocaust in 1944.

Following the German occupation of Hungary in March 1944, the German SS and the Hungarian authorities competed in brutality and swiftness in deporting Jews to Auschwitz, including the train my father was on.

Because of active Hungarian participation in the deportation, the Germans had to deploy only a few dozen officials to the task. This local engagement in the deportation resulted from a quarter century of anti-Semitic propaganda by Horthy's regime.

It should be a moral and political obligation for Hungary, as a member of NATO and the European Union, to make an unambiguous condemnation of a Nazi-ally and "war criminal" like Horthy.

But there is a clear reason why current Prime Minister Viktor Orbán and his party cannot and will not condemn Horthy and his regime. Since their accession to power in 2010, they have been transforming Hungary with the barely disguised goal of emulating their predecessor from decades earlier.

Aside from radical Neo-Nazi groups, few around the world would elect to honor the disgraceful, inhumane crimes of the Nazis and their supporters during some of the darkest years of human history. And while such a group and not the Hungarian government erected Horthy’s bust, choosing to stay silent on the matter sends a horrifying message.

The past may well repeat itself if we do not take note and protest the bleaching of history.

The sad reality is that as he aspires to imitate Horthy's regime, Orbán is not in a position to offer unambiguous critique of the unveiling of Horthy's bust.

During his three years in power, Orbán has curtailed freedom of the press, destroyed the system of checks and balances, and has rewritten the Constitution.

Each of these acts has degraded Hungary’s democratic process. Together, they explain why the US Embassy's call for an unequivocal condemnation of Horthy and the recent tribute to him is not going to happen.

Budapest is a magnificent city with magnificent attractions for locals and tourists alike. But it is painful to visit a place that disregards the difficult past of so many of its people.

I cannot imagine what it must be like for my father, who barely escaped death during the Holocaust, to walk the streets of a city where those who were associated with such horrific acts are now honored with a statue.

Eszter Hargittai is the Delaney Family Professor in the Communication Studies Department at Northwestern University and a fellow with The OpEd Project.