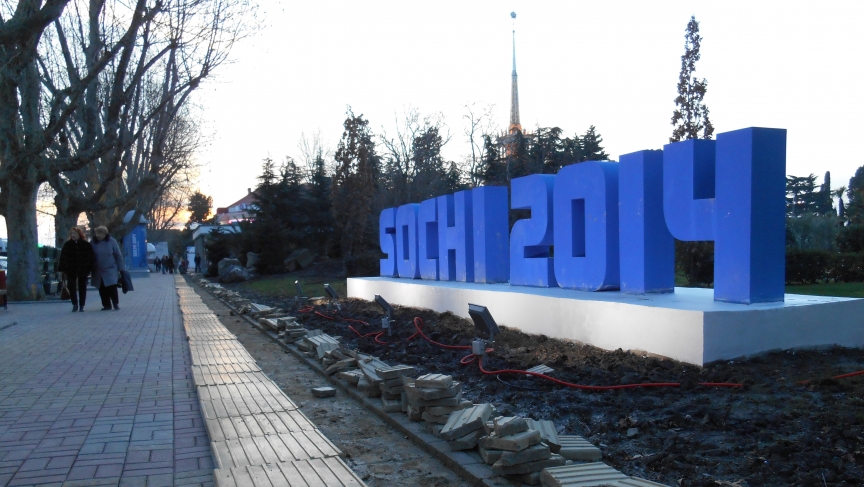 Sochi has been struggling to make its public spaces handicapped accessible, including sidewalk markings for the visually impaired. Two weeks before the Olympics, there was still work to be done.

Sochi sits on unstable ground, a formerly marshy plain where the Caucasus mountains erode into the Black Sea. The landscape is constantly shifting underground, but it has never changed as much on the surface as in the past seven years, since Russia won its bid to host the Winter Olympics here.

I last visited Sochi two years ago, when it still had the lingering feeling of a post-Soviet resort town, albeit a resort town suddenly annexed by the world’s largest construction site. Now much of that construction—new roads, mountain tunnels, railroads, arenas and ski-jumps, all estimated to cost some $50 billion—is finished.

With 10 days before the Olympic opening ceremonies on February 7, only about a 1,000 final touches are left: signs to put up, paving stones to lay, windows to wash, and touch-screen computer kiosks to fill with badly-translated information on local attractions.

Almost all Olympic Games feature last-minute scrambling by their host cities. But Sochi seems unique in its wrenching transformation, a transformation that’s nowhere near over.

A disturbing number of empty skyscrapers and shopping centers now festoon Sochi like high-end ghost towns. If these buildings were started in the hopes of attracting international tenants thanks to the Olympics, then they’ve horribly missed their deadline.

Some of the structures may have simply had bad financing, but others, the locals tell me, are built on areas where the geology can’t actually support tall buildings. Many are illegal above a certain height. And yet, city officials allowed them to be built (or half-built). Now they sit as monuments to the unseen forces—greed, corruption, bad planning, and a shady economy—that allowed them to rise in the first place.

Even the Sochi Hyatt, right next door to my ancient and dumpy Soviet-era hotel, is not ready to take bookings. Instead, the massive, glass-balconied structure is a 24-hour worksite reverberating with solder-irons and nail guns. Workers covered with plaster dust crowd the neighborhood minimart late at night, stocking up on cigarettes, candy bars, sunflower seeds, and energy drinks.

Sochi has been known in Russia as a place to kick back, maybe go on a bender by the beach, but no one here seems to be drinking alcohol right now. There’s too much to do, and the stress is palpable in the air.

Though some Sochi residents are making money from this event, many have made colossal sacrifices for the Games. Some have lost their homes; some environmental activists have gone to jail. Others, especially students and teachers from local universities, have been pressed into 'volunteer' work that amounts to forced labor.

Though no one will tell me about it on tape or for attribution, I’ve heard stories of local teachers working day and night to clean up newly constructed hotels. No one dares to say no for fear of losing their jobs. Some students working late nights 'volunteering' have had to pay their own taxi fares home, when the going rate from mountain resorts to central Sochi is $70 one way. Just for some perspective, that’s the equivalent of a month’s stipend for Russian college students.

But for students of foreign languages here, this event represents a huge opportunity to interact with the outside world. Sochi had never had many foreign visitors until these last couple of years.

Any Russian here who speaks English is in huge demand, and the need may soon be overwhelming. As an experiment, I tried packing my Russian away and speaking only English around Sochi. The experience was uncomfortable for everyone, though people were more than eager to treat a foreigner with kindness.

In a press conference with foreign reporters, President Vladimir Putin promised security in Sochi would be hard to notice. That is not quite the case.

Getting on the new trains that run between the city and Olympic sites requires a full security check and pat-down. Once we got off the train at Krasnaya Polyana, I snapped a few shots of the mountains in the distance beyond the station’s entry checkpoint. Security personnel emerged from a building across the square and demanded I delete the pictures from my camera.

Even more unsettling are reports from Moscow that anyone who’s known as being against the Putin regime is now being denied the right to travel to Sochi. Given recent terrorist attacks in Southern Russia, and the huge importance of these games to Russia’s image, the level of paranoia here is understandable. But it still casts a shadow on the lovely view of snow-capped peaks that the state is hoping to show off to the world now and for years to come.

So does the dark history of how this land came to be Russia’s in the first place.

One could spend a long time enumerating all the problems and worries here in Sochi before the Olympics. But it’s also important to remember that ordinary residents are proud of their city and its spectacular setting. They’re ready to show it off to the world, and I hope that in turn, the world appreciates all they’ve given up to make this mega-event a success.