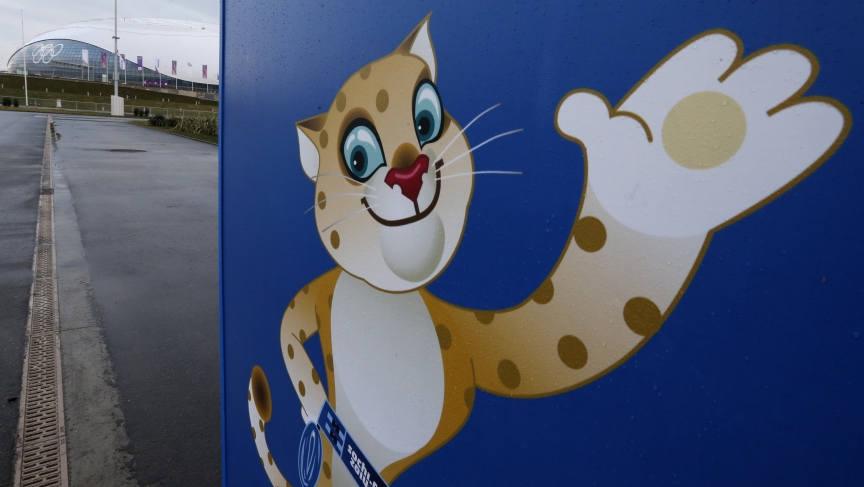 The Leopard, an official mascot of the 2014 Winter Olympics Games, is seen in front of the Bolshoy Ice Dome in Olympic Park in the Adler district of Sochi, January 24, 2014.

For people in Russia, including President Vladimir Putin, holding the Winter Olympics in Sochi offers them something even more powerful than athletic feats of strength and grace.

It's Russia's chance to show the world a new image — one that's free of the sickle and hammer of the former Soviet Union. At least, that’s what Natalia Antonova, the acting editor of The Moscow News, says.

“[The Olympics] are a symbol of the new modern Russia,” she says. “It’s a prestige thing for everyone."

She says most Russians are excited about the games, for pretty simple reasons: It’s sports. It’s exciting. People respond to it.

You can see this new, modern Russia through one of the most carefully crafted images of the games: the mascots. One is a polar bear. Another is a hare. And the third is a leopard.

While you might be afraid to encounter a polar bear or a leopard in a dark alley, the Olympic mascots are far from ferocious. At least that's what their official biographies say.

The polar bear was brought up by Arctic explorers from a very early age. It was they who taught him skiing, speed skating and curling. But above all the polar bear enjoyed riding sports sleighs.

The little doe hare trusts her friends so much that she doesn’t have any secrets. She simply loves sport with all her heart. And she also loves to sing and dance.

The Leopard is an experienced snowboarder and has taught all his friends and neighbors to snowboard too. He is a cheerful character who enjoys the company of others and loves to go dancing.