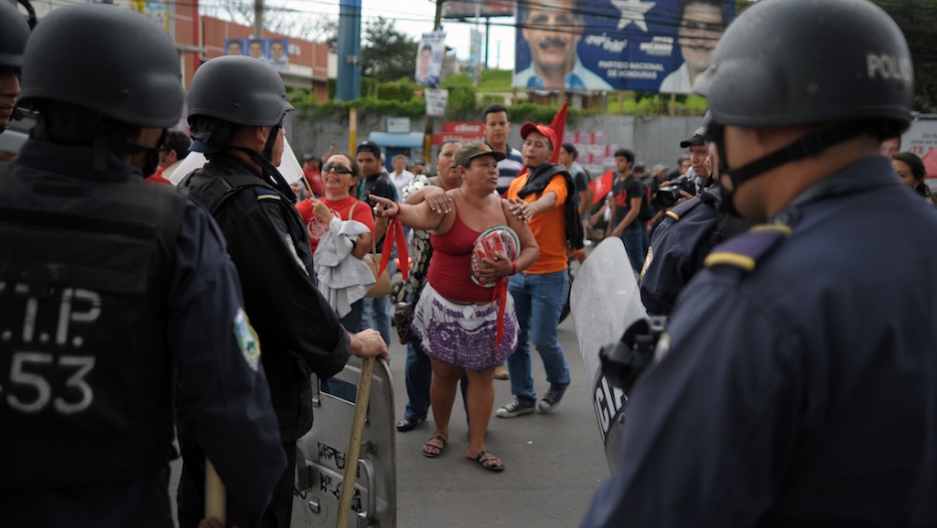 Policemen stand guard as supporters of the Libertad y Refundacion Party (LIBRE) presidential candidate, Xiomara Castro, protest the day after general elections in Tegucigalpa, Honduras on November 25, 2013. Political tension loomed over violence-torn Honduras on Monday as the conservative candidate Juan Orlando Hernandez led the early count in presidential elections while his leftist opponents claimed fraud. Hernandez declared himself the winner with 34 percent of the vote, after 54 percent of ballots were counted.
Credit: JOSE CABEZAS
Share

RIO BLANCO, Honduras — Berta Caceres, a leader of the indigenous Lenca people in Western Honduras, was forced into hiding in September 2013 when a judge ordered her to be jailed.

As coordinator of the Civic Council of Popular and Indigenous Organisations (COPINH), today Caceres, 42, is at the forefront of a campaign by the Lenca community in the rural village of Rio Blanco to defend a sacred river on its territory against a multi-million-dollar hydroelectric dam.

Lenca territory is protected by the legally binding International Labor Organization's Tribal and Indigenous Peoples Convention, but this didn’t stop the government from selling off the river without consultation. Most of the community is against the dam, fearing water shortages, environmental damage and loss of their spiritual connection with the ancestral territory; a small number believe the dam will bring much-needed services to the neglected area.

The dam is one of the concessions awarded by Congress in September 2010 as part of a raft of business-friendly laws favouring multinational investments in energy, mining and tourism. Honduras was declared ‘open for business’ by Juan Orlando Hernandez, who in November 2013 was elected president of the country amid allegations of election fraud and intimidation.

Hernandez, whose four-year term begins Monday, campaigned on a promise to put a “soldier on every corner." Caceres said she has been the target of a campaign of terror which includes attempts by unmarked cars to run her off the road and numerous threats of murder and sexual violence against her, her 81-year-old mother and four children. The threats, she told GlobalPost from her home in the pine covered mountains of La Esperanza, are from private security guards working for Desa, as well as the military and police protecting the dam project.

The Honduran company Dessarollos Energeticos SA (Desa), which was sold the dam concession by the post-coup National Party government in 2010, have accused Caceres and her colleagues Tomás Gómez and Aureliano Molina of “usurpation, coercion and continued damages”.

In other words, inciting the Rio Blanco community to protest and prevent construction of the dam using a roadblock.

Caceres was singled out for prison because it was her second alleged offense. In May last year she was accused of possessing an illegal firearm, which she says was planted by soldiers at a checkpoint.

Amnesty International accused the Honduran state of targeting the COPINH leaders with bogus charges for defending their community’s human rights. If imprisoned, Amnesty said it would consider them prisoners of conscience.

Violence in Honduras has spiralled out of control since the June 2009 coup d’état and it is the world’s most murderous country outside a war zone. Drug cartels undoubtedly took advantage of the post-coup chaos and can be blamed, along with the warring maras (street gangs) for a significant proportion of the violence, but not all of it.

Honduras is the second-poorest country in the Americas after Haiti, with 60 percent of the population living in poverty. The country has been ruled by 10 powerful oligarchies for the past century or so, and the gap between rich and poor, and ‘common crimes’ such as robberies and muggings, have increased since the coup.

Eighty percent of reported crimes are carried out with unregistered firearms, according to National Security Committee figures.

But over the same period community leaders, lawyers, journalists, LGBT activists, union workers, political opponents, often those highlighting or fighting against the government’s neoliberal policies, have also become victims of targeted killings which are being carried out with almost total impunity.

This includes high profile lawyers such as Antonio Trejo in September 2012 who was representing peasant farmers (campesinos) in land disputes in the Bajo Aguan valley. More than 100 campesino leaders in the Bajo Aguan have been killed since 2010 without a single conviction.

Around 30 journalists have been murdered since 2009, making Honduras one of the most dangerous countries in the world for the press.

The latest victim Juan Carlos Argeñal was shot dead at home in the southern department of El Paraíso on Dec. 7, 2013. He was a correspondent for the left-leaning Radio Globo and Globo TV, owner of a local TV station and an activist for the Freedom and Re-foundation Party (Libre).

Figures collated by the Canadian group Rights Action found that Libre—the new political party to emerge from a popular uprising after the coup—suffered the majority of attacks in the election cycle.

Karen Spring from Rights Action said: “There is a complete lack of political will to investigate deaths of journalists, lawyers, community leaders and other human rights defenders, so there is no authoritative conclusion about why they were killed. Yet the full force of the state goes behind pursuing political opponents, those defending natural resources or challenging the status quo.”

Honduras is strategically very important to the US in its war on drugs, but after huge efforts by a number of US congressmen, a bill was passed on Jan. 15 which dictates 35 percent of American financial aid to the Honduran police and army can be withheld if the government fails to tackle corruption, impunity, attacks on freedom of expression and human rights abuses, particularly in the Bajo Aguan.

For the COPINH trio, too, there has been some good news.

On Jan. 9 the Court of Appeals provisionally dismissed the charges and revoked the capture order against Caceres, meaning she at least can come out of hiding. But the case will remain open for five years, which Amnesty told GlobalPost will have a “chilling effect on them and all human rights defenders who face terrifying risks every day, in a society blighted by high levels of inequality, insecurity and impunity.”