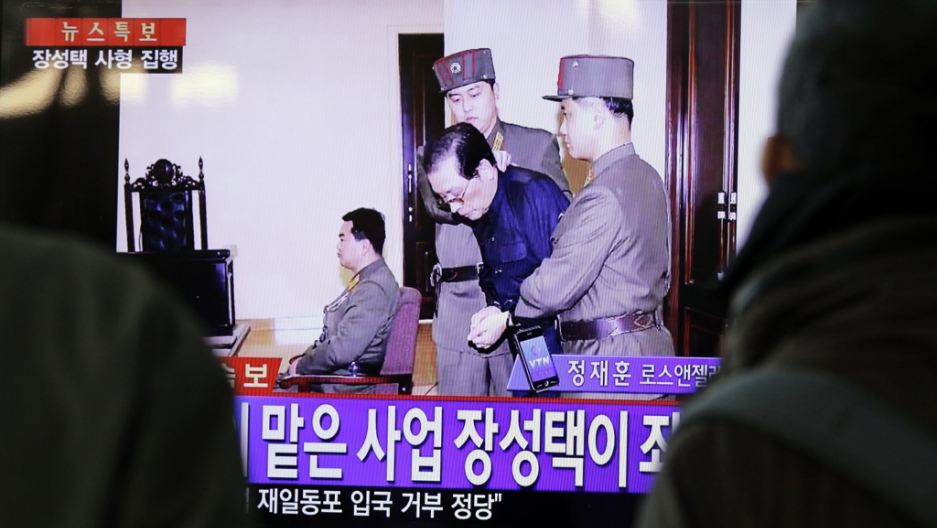 South Korean TV shows Jang Song Thaek in court before his execution. North Korea announced on December 13, 2013, that it had executed the uncle of its leader Kim Jong Un after a shock purge.
Credit: WOOHAE CHO
Share

SEOUL, South Korea — On Sunday, the South Korean news agency Yonhap reported that “all relatives of Jang [Song Taek]” — including children and the ambassadors to Cuba and Malaysia — have been put to death at the orders of the generalissimo.

Accused of corruption, womanizing and fomenting political factionalism, he was executed on Dec. 12 — following a dispute over coal and seafood exports that had apparently culminated in an armed clash.

As is often the case with scoops on this hermetic nation, the assault on Jang’s gene pool could not be confirmed. Yonhap cited “multiple sources.”

Korea watchers initially expressed deep skepticism about other recent news stories — such as widely repeated allegations that Jang had an affair with Kim’s wife, and that a team of vicious dogs had been used to carry out Jang's execution. Only after the latter tale swept across the internet did we learn that it apparently originated from Chinese satire.

So what about the news that not just Jang but members of his extended family have been put to death?

This one, experts say, could very well be true.

In its attempts to assert total control and prevent any ideological “contamination,” North Korea runs an enormous penal system, deploying disappearances and collective punishment. Some 150,000 to 200,000 prisoners languish in labor camps, although some experts believe the number is declining.

As part of that effort, more than a few North Koreans are known to have been executed or arrested for the Stalinist crime of sharing a bloodline with a “traitor.”

Concerning Jang’s family, “Based on the severity of crimes that the regime has officially accused Jang of, it would be surprising if some form of collective punishment was not practiced,” said Sokeel Park, research director at the non-profit group, Liberty in North Korea (LINK).

“Collective punishment is not practiced universally in North Korea,” he said, “but it is practiced arbitrarily depending on the case and the perceived need to set an example and remove potential sources of future problems from society.”

The policy is a pragmatic one, he said. Guilt by association ensures that anybody who’s been “ideologically contaminated” is cleared out of society, while deterring would-be troublemakers with the threat of suffering for their loved ones.

The practice goes back decades. In 1972, the founding father of North Korea, Kim Il Sung, issued an order that up to three generations must face punishment to prevent the spread of impure ideologies, and to squash “class enemies.”

But while many reports claim the regime targets three generations of the family, it’s been known to go further.

In one famous instance, when high-ranking ideologue Hwang Jang-yop defected to the South in 1997, North Korean authorities rounded up distant relatives, including faraway cousins, aunts, uncles who didn’t even know Hwang personally — some apparently weren’t even aware of their blood ties.

Park said the practice was prevalent in medieval Korea, where monarchs once exiled entire families as a punishment for an individual’s transgressions.

A former Singaporean defense official added that historically, collective punishment was routine in China, although it’s unclear whether North Korea derives the practice from its neighbor.