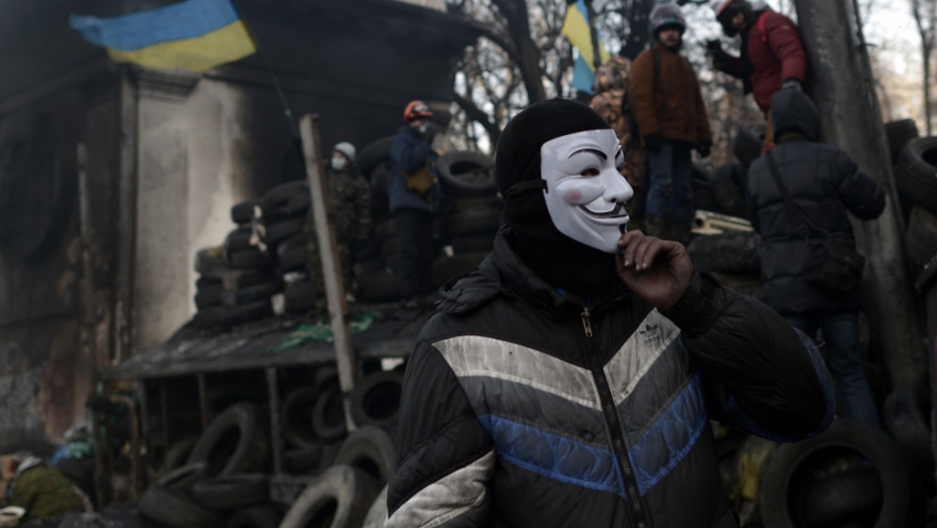 KYIV, Ukraine — On the streets of Ukraine’s protest-ridden capital, you’d never know embattled President Viktor Yanukovych offered his most substantial concessions yet to the anti-government demonstrations that have fanned out across his country.

That’s because for most protesters here, they don’t count for much.

Despite the president’s offer late Saturday to invite two of the country’s three main opposition leaders into his government, protests rage on in defiance of ominous warnings from the nation’s top cop.

Shortly after news broke of Yanukovych’s offer, demonstrators stormed a major exhibition center in central Kyiv, forcing out the contingency of police holed up inside and expanding the list of key downtown buildings that have fallen under anti-government control.

Here's the view from the captured Ministry of Agriculture in Kyiv on Sunday:

The unrelenting momentum of protests here and elsewhere in Ukraine — in spite of apparent official overtures at a political solution — illustrates the growing urgency of the country’s worst political crisis since independence.

To some, the news signaled that the ruling regime has finally begun to grasp the gravity of the situation.

But to many others — especially the thousands who stormed the Ukrainian House exhibition center late Saturday night — the offer appeared little more than a bid to split the already tenuous opposition leadership.

Fresh clashes reignited as protesters laid an hours-long siege on the Ukrainian House, shattering its sweeping glass façade and storming through a hail of freezing water sprayed by the police barricaded inside.

Eventually, opposition leaders secured a safe exit for security officials, and by Sunday morning, protesters hunkered down on two ransacked floors of the spacious, Soviet-era building.

Helmeted and war-weary fighters lay sprawled across the marble floors, exhausted from the all-night siege.

A group of Afghan war veterans in battle fatigues — who have played a key role in providing security for the protest movement in Kyiv — consulted with one another over walkie-talkies.

“It’s clear to everyone now that the situation has become very serious,” said a young activist who took part in the siege but asked not to be identified. “No one’s joking here.”

The increasing resolve of anti-government demonstrators in recent days, galvanized by the death of several protesters and widespread reports of police abuse, has been met with a hardening stance among top officials.

Comments from Interior Minister Vitaliy Zakharchenko on Saturday, who cast negotiations as “futile” after a truce between police and protesters fell through the night before, stirred fears of an imminent police crackdown.

“The events of recent days in Ukraine’s capital have shown that our attempts to peacefully resolve the conflict without resorting to violent confrontation remain futile,” he said in a statement.

Zakharchenko also warned that the political opposition has lost control of "extremist groups" who have seized several official buildings in Kyiv, claiming they were stockpiling firearms in at least two of them and had kidnapped — but then released — two police officers.

His comments struck a chord among ordinary protesters who reject official claims that they are "extremists."

But those same protesters nevertheless agree that many have become radicalized by the violent clashes that erupted last week and the increasing reports of retaliation against civic activists.

“I know so many liberals who have become not just nationalists, but 'fighters', as some call them,” said 58-year-old protester Vasyl Boichuk. “Among us are intelligent, cultured and creative people.”

Meanwhile, local media reports indicated that protesters had seized around a dozen gubernatorial headquarters across Ukraine as the demonstrations spread nationwide.

By Sunday evening, anti-government forces occupied the regional offices in nearly all of Ukraine’s largely pro-Europe western regions, while sieges on local administrations remained ongoing in other parts of the country.

For many, like 47-year-old protester Volodymyr Bocharov from northern Ukraine, the original goal of the two-month-long demonstrations — European integration — seems a distant memory.

He says the only way the protests will end is with a complete change of power.

"Who needs European integration with a government like this?" he said.