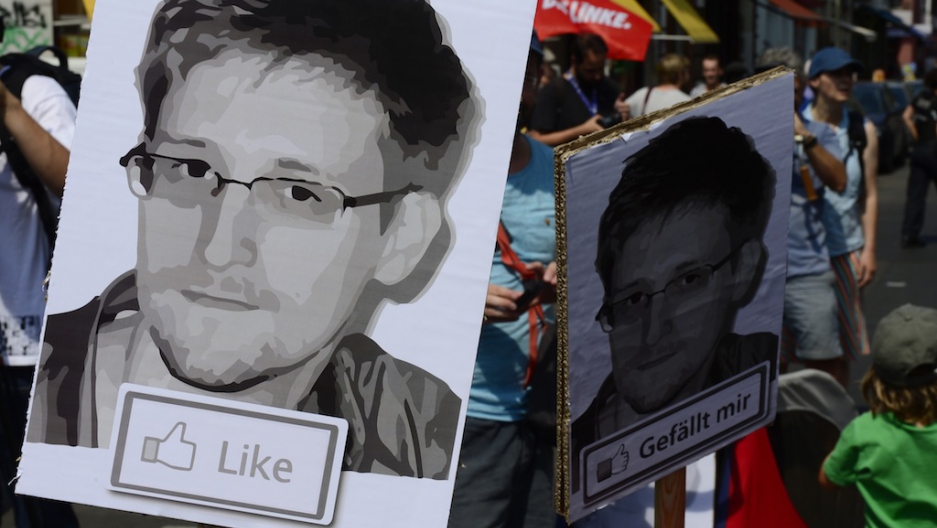 Demonstrators hold placards featuring Edward Snowden as they take part in a protest against the NSA collecting German emails, online chats and phone calls and sharing some of it with the country's intelligence services in Berlin on July 27, 2013.
Credit: John MaCdougall
Share

In text released from the full interview - to air Sunday night - ARD TV quotes Snowden as saying the NSA gathers information not only civilians and politicians (like German Chancellor Angela Merkel) but also international corporations.

“If there's information at Siemens that's beneficial to US national interests – even if it doesn't have anything to do with national security – then they'll take that information nevertheless,” ARD quoted Snowden as saying.

There had already been allegations of economic espionage against the NSA in the German press, according to Deutsche Welle, Germany's international broadcaster, and this latest NSA revelation supports that narrative.

Snowden's claim comes just after The New York Times published a report on "Quantum," a secret program under which the NSA installed software into some 100,000 computers around the world.

According to The Times, that technology, which the NSA has used since at least 2008, allows the agency to use a covert channel of radio waves to "conduct surveillance on those machines" even if those machines are not connected to the internet.

The paper said the program has targeted the Chinese military, the Russian military, Mexican drug cartels, and trade institutions inside the European Union.

Snowden also said he does not have any of the top-secret documents in his possession and that he had no say in what is and what is not published, adding journalists now control the material, according to ARD.

ARD TV interviewed Snowden in Russia, where he is living on temporary asylum. It's not clear where the whistleblower will go once his time runs out. The charges against him include theft of government property and giving classified intelligence to an unauthorized person.

Whatever Snowden's limited options and choices, he recently said he had no intention of returning to the US. In a recent Q and A session on the "Free Snowden" website, Snowden said under current whistleblower law he had "no chance" for a fair trail.