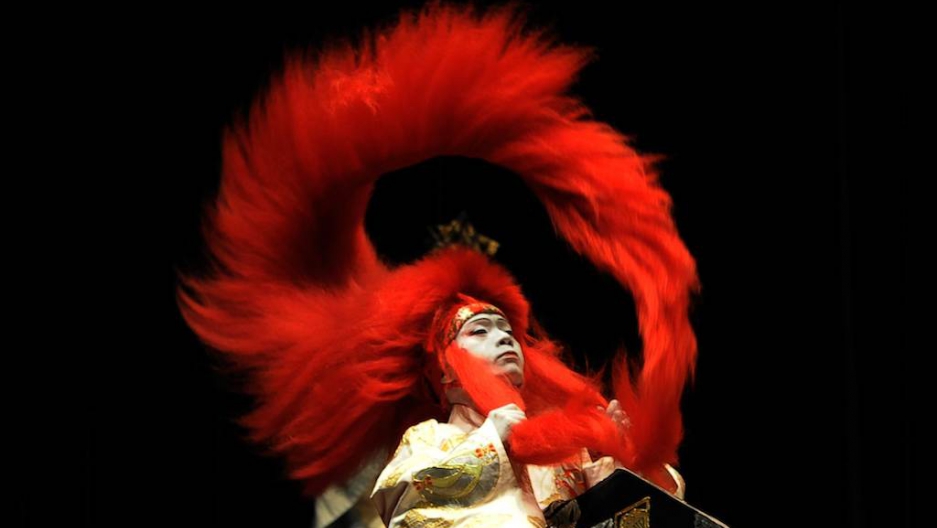 A Japanese actor performs during a presentation of a play called 'Saigmusume.' Kabuki Theatre is a highly stylized classical Japanese dance-drama. The related musical form, Nagauta, is powerful and dramatic, if alien to Western ears.
Credit: Jose Cabezas
Share

TOKYO, Japan — Cross-dressing monkeys, suicidal bunnies and enough alcohol to knock out an elephant: This is nagauta.

A Japanese music born of the traditional Japanese theater form kabuki, nagauta extracts the essence of what is happening on stage, and converts it into a song.

What is left for the audience is powerful. Instrumental sounds alien to most Western ears are combined with singing performed in voices distant from pop standards.

Think of it as the anti-Lady Gaga. In a nation that musically has often simply “borrowed” from the West, nagauta is a centuries-old tradition that allows listeners a glimpse of the Japan that existed before the US forced the country to open up to trade in the second half of the 19th century. Today, an upsurge of younger nagauta enthusiasts, sick of the bland J-pop sensibilities, means the music is in little danger of becoming a cultural footnote.

And the nagauta lyrics? They tell their own story.

Traditional stories sung in heterodox voices point to a long lost Japan, in which nature is valued and the great outdoors treasured. Animals with human qualities are challenged by gods. The simple pleasures of fishing are celebrated. The budding of flowers means more than an opportunity to get drunk at a cherry blossom party in the park.

That's not to say alcohol does not play a big part in Japanese tradition.

Take the song "Saru Mawashi." It tells the story of a performing monkey and his master. After a hard day’s work, the two head to a bar. Drunk, the monkey dresses as a woman for a laugh. Then his master gets too inebriated and is dragged home by the cross-dressing primate. “In the Edo Period, culture was often connected to alcohol,” says Katsutoshi Tsukuhara, a leading shamisen player.

Put this song into the context of kabuki: It is a theater style where women are not allowed. The men play men, women, gods and animals. “Kabuki is exclusively male,” says Tsukuhara, necking a mouthful of his favored drink, Hoppy. “When men play women, it makes things more interesting. When there is music only, we discuss these sorts of things through parables. There are more than 100 songs, so (as well as alcohol) they often focus subjects such as love.”

“If you were to stop the smoking, the drinking and the parties,” says Tsukuhara, “then you would not be able to create the parables and the feeling that are needed for this.” Tsukuhara, a 45-year-old who appears 10 years younger, is a senior shamisen player in the world of kabuki and nagauta.

Do not call him an artist or a performer. He is a geinin. “There is not an English word for geinin,” he says. “Performer is close, but it isn't exact. You cannot have a serious geinin.” The word’s incommensurability comes from nuances in Japanese society.

Glass ceilings are numerous. A more extravagant lifestyle defines geinin, but just as much, being aware of limits is key. “There are people that take it too far. That's a different story. But you need have a rebellious spirit to express the essence of the shows.”

For an idea of what taking it too far means, look to Ebizo Ichikawa XI.

A kabuki actor carrying on the tradition for an 11th generation, Ebizo was caught up in a drunken brawl in 2010, bringing the theater form into disrepute. The actor received a black eye, reportedly doled out by a member of a motorcycle gang after a night of hard drinking. It was not the first time the actor had got into trouble after one sake too many. Whoops.

Back to the music. Another song, written in 2010, tells the story of a monkey, a fox and a rabbit. A god wishes to test their friendship. He comes to Earth as a starving man and seeks the assistance of the animals. The monkey and the fox forage for food and return. The rabbit, unable to do much, asks the other two animals to bring firewood. Once the fire is lit, the rabbit serves himself up as a meal for the starving man.

Giving oneself over for the collective good is an often-told and misinterpreted anecdote of life in Japan. Plenty choose more independent lives, free of the follies of the salaryman’s daily grind.

The world of kabuki though, demands a certain sacrifice. “There will never be a Jimi Hendrix of kabuki,” says Tsukuhara.

He should know. Before taking up the shamisen, and working in the more traditional cultural field, Tsukuhara had ambitions of following in the footsteps of his British rock star heroes.

In the beginning, no novice takes center stage in the worlds of kabuki and nagauta. That is reserved for more experienced players. Experience brings more seniority and leading roles in performances. “The shamisen player in the center is the conductor,” Tsukuhara says. “All follow him. I took the center position around five years ago.”

Other shamisen players follow the “conductor’s” lead, in addition to percussionists, vocalists and performers on numerous other instruments. “It's the same as AKB48,” he adds, referring to a 89-member singing and dancing Japanese “idol” group. “And I am Oshima Yuko, the leader of the band.”

Not quite. AKB48 are trite pop dullards. With nagauta, listeners get a sound stoked in tradition and alienated from the reality of everyday Japanese life. “The voices in the songs do not sound particularly human,” Tsukuhara says. “But when you think about Western music — rock, jazz or blues — people do not sing the same. These voices come from noh theater. Why do they not sound human? I don't know. Because the stories are parables?”

Does this make the music unpalatable to Western ears? It shouldn’t. “I don't understand Led Zeppelin, but they are cool,” Tsukuhara says.

“The sense is great. That's the way people should listen to Nagauta. It’s cool,” he adds. Even young Japanese do not listen to the music in the traditional way. “Young people do not understand the real meaning of kabuki,” Tsukuhara says. “But as long as they are watching that's OK. They tend to focus more on fashion and the looks of the actors. Japanese culture has changed. There didn't used to be a lot of foreign culture here. Now, there's TV and radio. That's changed people.”

That hasn’t left Tsukuhara jaded. He enjoys his music and plans to continue. “I will never retire. I'll play until I die. Like Paul McCartney …” he says, bursting into "Live and Let Die’s" chorus. “And like Mick Jagger.” A friend interrupts: "I like Boy George."

The conversation moves on to British pop music from the 1980s.

Watch Tsukuhara play "Smoke on the Water" and other rock on the shamisen (Video courtesy Adrian Storey/Uchijin www.uchujin.co.uk):