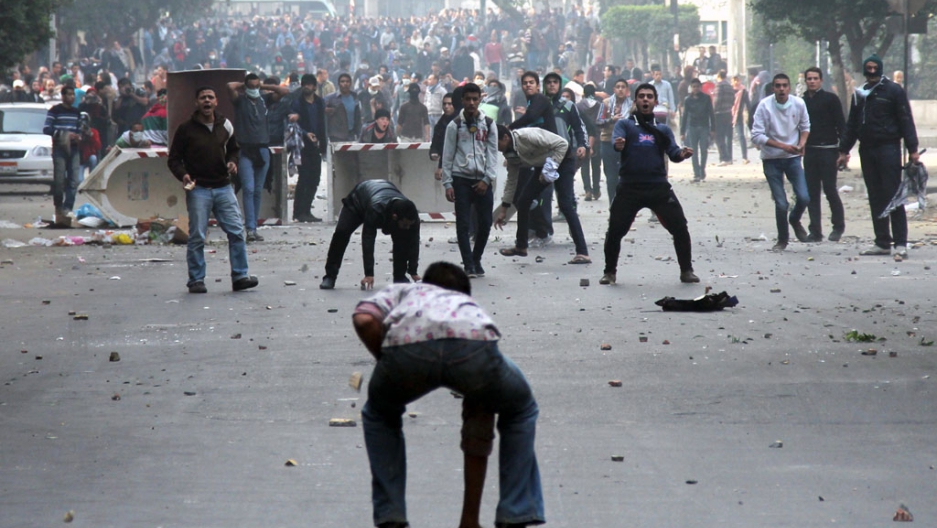 CAIRO, Egypt — Forty-nine people were killed and dozens injured on Saturday as opponents and supporters of Egypt's military-backed authorities took to the streets, each laying claim to Egypt’s 2011 revolution, three years after it began.

In a statement, Ansar Bayt el Maqdis warned that the attacks were only the “first drops of rain.”

Violent clashes between anti-government demonstrators and the security services raged throughout the afternoon in nine governates, leaving at least 49 people dead and injuring dozens.

Numerous reports suggested that police had fired live ammunition into the crowds in some areas.

In Cairo, thousands flocked to a heavily guarded Tahrir Square, once the epicenter of Egypt's revolution, to express their support of military chief Gen. Abdel Fattah el Sisi, and reject the notion that either the Muslim Brotherhood or young secular activists had any claim on the 2011 revolution.

“I’m here to support the revolution with my fellow Egyptians,” said 44-year-old Tarek Suleiman, brandishing a poster of Sisi. “The people you see around you, they are the owners of this revolution.”

Those inside the square expressed overwhelming levels of support for the expected presidential bid of Sisi, arguing that he was the man to steer Egypt through the political turbulence that has wracked Egypt since the July 3rd ouster of former president Mohamed Morsi. The intervention was widely welcomed, and he is now seen by many as a national hero.

“Sisi is the only one who has truly protected Egypt, especially from the treacherous Muslim Brotherhood,” said 17-year-old Nora Reda. “He’s a real man, and he speaks for all Egyptians.”

But just a few streets away, around a thousand anti-government activists gathered outside the Journalists’ Syndicate, filling the air with vociferous chants against the general, as well as the police.

“This is our revolution, and we’ve come to protest against the police, and the human rights violations that keep continuing,” said Mohamed Belal, an civil engineer and a leftist activist. “There have been so many splits among the revolutionary coalitions, so now we’re going back to basics, and back to values we can all agree on. We want more than ever to realise the demands of our revolution: bread, freedom and social justice.”

Participants stressed that their presence on the streets was vital on the revolution’s anniversary, as it sent a message to the authorities that they are willing to continue their struggle.

Since Morsi’s ouster, the Egyptian authorities have embarked on an aggressive crackdown against both the Muslim Brotherhood and other dissenting voices. Secular and leftist activists have come under increasing pressure since November, following the introduction of a law that criminalises unlicensed street protests.

Egypt’s interior minister Mohamed Ibrahim has boasted that his police force now routinely round ups over 500 protesters every Friday. On Saturday, at least 450 people were arrested nationwide.

As cries of “the people demand the fall of the regime” rang out among the anti-government protesters, a steady trickle of Sisi supporters passed through the area on foot, often stopping to argue with the demonstrators. “Go home young men,” shouted one passerby, “your revolution has ended.”

But the protesters were undeterred and later attempted to march down the area’s main thoroughfare.

“Mubarak supporters are trying to steal our square and our revolution, this is why we’re out on the streets,” said Mohamed el Bendari, as he marched. “We need to show that despite the arrests of the youth, we are still here, and we are still fighting.”

This particular fight didn’t last long, however, as police quickly moved to disperse the crowd with tear gas. Regrouping defiantly, a number of the protesters stayed to fight cat and mouse battles with the security forces. They were repeatedly forced into alleyways as riot police fired barrages of tear gas. Later, police appeared to be using live ammunition.

As night fell, the clashes continued, and military helicopters continued to patrol the Cairo skies throughout the evening.